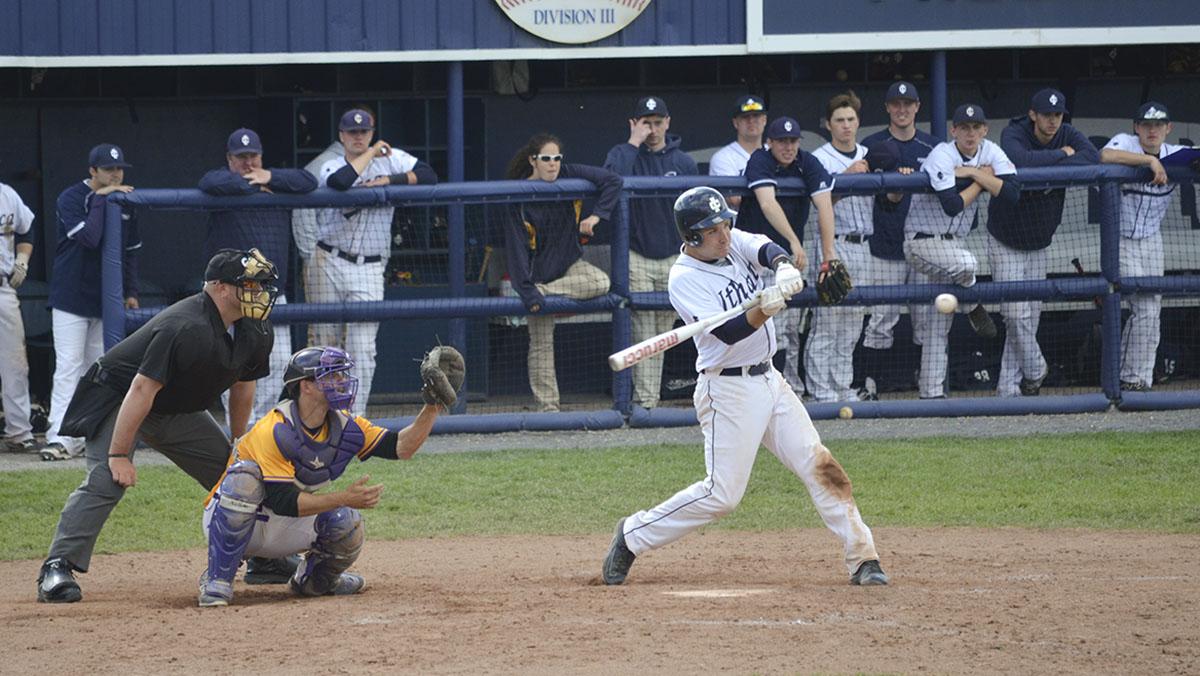 The Ithaca College baseball team finished out the regular season on a high note, winning three games over the weekend.

In their first Empire 8 action of May, the Blue and Gold picked up three wins against Elmira College on Saturday and St. John Fisher College on Sunday.  With the wins, the Bombers are now 24–14 on the season and 13–5 in conference play.

In the first game of the weekend, the Bombers got off to a fast start against Elmira and were led by a strong pitching performance from senior John Prendergast.

The Bombers scored two runs in the first inning off a double from junior Trevor Thompson that scored freshman Webb Little, and a single from freshman Sam Little that scored Thompson.

This is the second straight game that the Bombers have had some excitement come on the basepaths. In the fifth inning, Little launched a line drive to center field and quickly crossed home plate for an inside-the-park home run. The home run was Webb’s third of the season. The Bombers went on to win 4–1.

Elmira picked up their only run in the second inning, but Prendergast was dominant throughout the game. The righty went seven innings while only allowing five hits and one run with six strikeouts.

In the second game of the afternoon, Elmira were the ones who got on the board first, but the Bombers quickly answered back. In the bottom of the first, Thompson hit a sacrifice fly to center field to score Webb Little and tie the game up at one.

Freshman Adam Gallagher then launched a two-run home run to left center in the second inning to put the Bombers up 3–1. Just an inning later, Thompson clubbed his fifth home run of the season to score another run.

Later in the game, the Bombers sealed the victory on the power of a home run from Little, his fourth of the season and second of the day.

Senior starter Benji Parkes had his last regular season start for the Blue and Gold. Parkes threw a complete game while only allowing one run on eight hits while striking out eight.

The Bombers’ momentum extended into Sunday as the team traveled to Rochester, New York.  In a battle of the two top teams in the Empire 8 conference, the Bombers came out on top.

The Blue and Gold dominated the Cardinals, earning a 16–1 victory.

As per usual, the Bombers got off to a quick start as they scored four runs in four innings. Most notably, Gallagher hit a triple in the fourth inning to score freshman Matt Carey and sophomore Domenic Boresta. Earlier in the inning, Thompson hit his second home run of the weekend.

Thompson’s hot hitting continued into the fifth inning, as he hit a double to score another run before the Bombers piled on three more runs.

Two innings later, the rout truly began. Boresta got the inning off with a bang, hitting a two-run home run before Thompson managed a single to score another run.

Carey was hit by a pitch while the bases were loaded, which scored sophomore Brennan McCormack.  A wild pitch to senior Cameron Oathout allowed Thompson to score another run to extend the lead to 15–1.

The Bombers weren’t done then, however. In the eighth inning, freshman Jake Generali launched a double to left center to score junior Ryan Dougherty.

Sophomore starter Tyler Hill also shined for the Bombers, as he went seven innings while allowing only one run on six hits.

The Bombers will return to action May 12 in the Empire 8 Championship Tournament in Rochester, New York.