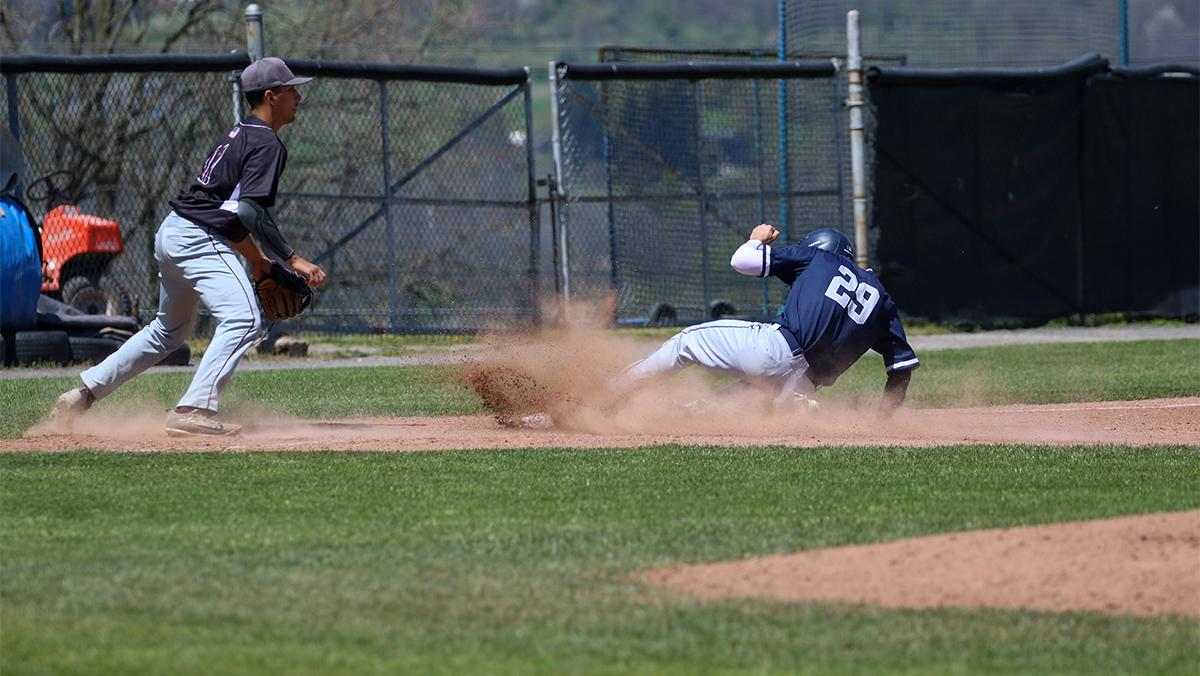 After splitting the first two games of the Liberty League Crossover Series on Saturday, May 7 against Union College, the Ithaca College baseball team came into the third game May 8 with their spot in the Liberty League Tournament on the line and the bats did not disappoint.

The Bombers dominated, as they won big by a score of 19–3 to advance to next weekend’s Liberty League Tournament Thursday, May 12 to Saturday, May 14 at Freeman Field. Freshman pitcher Colin Leyner was great on the mound, giving up three runs on three hits with five strikeouts over six innings. Senior infielder Buzz Shirley, freshmen infielder Nicholas Cutaia and junior outfielder Matt Fabian each had three RBI for the Bombers.

Leyner set the tone, throwing 1-2-3 innings in the top of the first and second innings, including striking out two batters in the second. The Bombers’ bats followed with sophomore infielder Louis Fabbo doubling with one out and Shirley driving him home with an RBI single to right field for a 1–0 lead. The Bombers added a second run as Cutaia doubled down the left field line, bringing Shirley home from first.

The Dutchmen threatened in the third inning, leading off with a single and a walk and advancing to second and third on a sacrifice bunt. The Dutchmen earned a run back with a sacrifice fly to make it a 2–1 ballgame.

The third inning proved to be a big one for the Bombers, and it began by getting its first two runners on with a walk by junior outfielder Mike Nauta and Fabbo being hit by a pitch. Shirley gave the college its two-run lead back with another RBI single to right field to make it 3–1. Cutaia brought a fourth run home, hitting a hard ground ball through the infield and advancing Shirley to third.

Freshman infielder Connor Pedersen cleared the bases with a double down the left-field line to extend the lead to 6–1. Sophomore infielder Ethan Rothstein tripled to left-center field, bringing home junior catcher Gil Merod who had reached on a walk. Freshman infielder Riley Brawdy brought home the seventh and final run of the inning with a sacrifice fly to make it 9–1.

The Dutchmen added another run in the fourth with a solo home run, but Leyner continued to throw well, adding another strikeout to his tally. In the bottom of the frame, Cutaia hit an RBI double and scored later in the inning after the Dutchmen made an error to make it 11–2.

The Dutchmen got runners to first and third with a walk and a single in the sixth inning. The runner scored from third on an error to make it an 11–3 ballgame. Leyner struck out two more batters in his final inning of work.

The Bombers loaded the bases with no outs in the bottom of the inning on three straight singles. Merod was hit by a pitch, bringing Shirley home. Fabian singled up the middle, bringing in two more runs to make it 14–3. The Bombers added two more runs on a catcher’s interference and a passed ball. With runners on second and third, Fabbo hit an RBI single, bringing home Brawdy to make it 17–3. The Bombers added one more in the inning from a sacrifice fly by Shirley.

The Dutchmen loaded the bases with one out off of graduate student pitcher Brett Budzak, who replaced Leyner, but Budzak forced a ground ball that Brawdy and Pedersen turned into a double play to end the inning. Pedersen added another run in the bottom of the inning, scoring to make it 19–3.

Junior pitcher Garrett Bell came on in the ninth to close out game three and the series win. That moves the Bombers to 27–12 on the season. The Bombers advance to the Liberty League Tournament beginning Thursday, May 12.