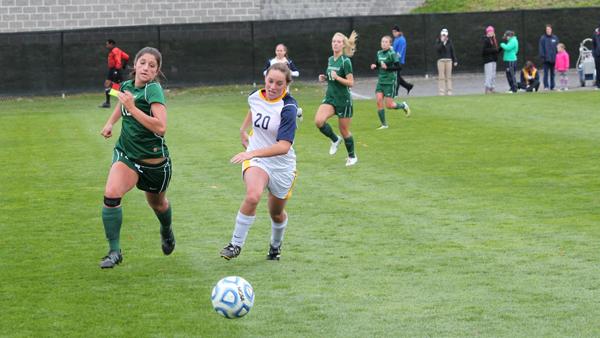 Pat Sullivan/The Ithacan
From left, SUNY-Farmingdale sophomore back Andrea Kiefer and junior forward Ellyn Grant-Keane give chase toward a loose ball during the Bombers' 3-0 win against the Rams on Oct. 13.
By Steve Derderian — Staff Writer
Published: October 30, 2012

On Saturday, the women’s soccer team walked into Tigers’ stadium in Rochester, N.Y., 90 minutes and one win away from an unbeaten regular season, boasting the No. 1 scoring offense and defense in the Empire 8 Conference. Seventeen games and 57 days into the season, the Tigers handed the South Hill squad their first and only loss of the year.

In only the Bombers’ second shutout loss in two years, the Rochester Institute of Technology Tigers contained the Blue and Gold’s offense in their first loss since their trip to the 2011 NCAA national semifinals. The Tigers, who were energized by their Senior Day, needed just one score from junior Alexa Martinez to walk off with a narrow 1-0 victory.

Junior Ellyn Grant-Keane saw her strike on goal in the 37th minute knocked away by RIT sophomore goalkeeper Amanda Murray, who dove in front of the net at the last second. Grant-Keane said the Bombers let the game slip away and were never able to play their own game and get into their own rhythm.

“We didn’t get out to play the way we wanted to, and we fell back on our heels too much,” Grant-Keane said. “We missed a lot of opportunities that we had, but we couldn’t convert.”

The South Hill squad fell just one game short of achieving the program’s third unbeaten season and first since 1993. Despite missing a chance at a historic season, senior back Anna Gray said the Bombers’ goal was never to achieve an unblemished record.

“Our goal all season has been to get better every game, sweep the Empire 8 and win the conference tournament,” Gray said.

Despite the late-season loss, the Blue and Gold remain optimistic about the rest of the season. They will still host this weekend’s Empire 8 tournament as the No. 1 seed and attempt to claim their first conference title since 2009.

Though the Bombers’ most recent NCAA Division III ranking has slipped down to eighth, the team is still likely to qualify for the NCAA tournament even if they do not win the automatic qualifier granted to every conference tournament champion.

Senior forward Julie Winn said preparation changes are crucial heading into postseason, because every game from now is single elimination.

“Now we’re working on putting everything together and fine tuning things, which will make our practices more intense and more focused,” Winn said. “We focus less on the opponent we’re playing and more about ourselves now.”

Winn also said the Bombers are not worried about the loss against RIT. At this point, they are ready to put their mistakes behind them before their semifinal matchup against St. John Fisher this Saturday on Carp Wood Field. The only other game the South Hill squad finished without a victory this season came during a 0-0 tie against the Cardinals on Oct. 7.

“Going into the playoffs we can use this game as motivation that we don’t want to have this feeling again since it’s win or you’re out,” Winn said. “Knowing that we’re not perfect and not invincible is kind of a good thing to realize now.”