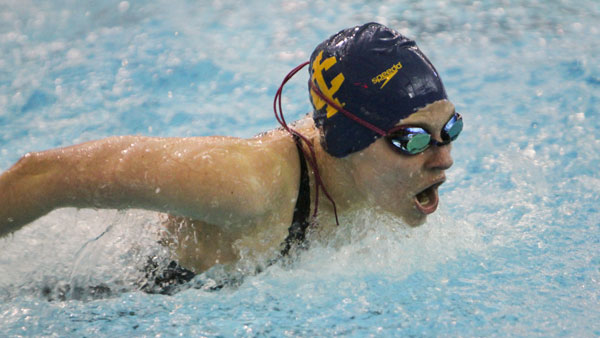 The Saxons were too much for the Bombers to handle, as three individual players contributed double-digit points. This win also gave Alfred a sweep of the season series against the Bombers.

Since the 2003 season, the Blue and Gold have only lost the final regular season game three times, including this season.

Head coach Jim Mullins, who is finishing up season 17 at the helm, has seen just four losing seasons throughout his career with the Bombers. Overall, the Blue and Gold finished the regular season with a 7–18 record and ranked No. 7 in the Empire 8 conference.

Junior forward Geena Brady led all Bombers with 12 points. Seniors guards Mary Kate Tierney and Elisabeth Wentlent each chipped in with four assists. The starters for the Blue and Gold were limited to 18 minutes of play, as they received plenty of help from the bench players who scored a combined 40 points.

With the win, the Bombers finished the season tied for first place with Hartwick College, as both teams share a 21–4 record and a 13–1 in the Empire 8 Conference.

The Bombers will host the Empire 8 Conference Tournament from Feb. 28 to March 1 in Ben Light Gymnasium. The Bombers play St. John Fisher College at 6 p.m. Feb. 28.

The No.15–ranked wrestling team celebrated Senior Night on Feb. 19 with a 20–13 win against its rival, No. 5–ranked SUNY Cortland.

Seniors Shane Bartrum, Josh Giacolone, Dominick Giacolone, Ricky Dracup and Brett Sanko were all honored for their years as members of the South Hill squad.

The Bombers opened the night with two victories, as freshman Jimmy Kaishian won his 125-pound bout 8–2. Junior Alex Gomez, the No. 1–ranked 133-pound wrestler, won by technical fall with a commanding 23–8 victory.

Cortland took the 141- and 149-pound matches, but the Blue and Gold responded with a 4–2 victory from junior Kevin Collins at 157 pounds and an 8–1 win from junior Kristopher Schimek at 165 pounds.

Though Carlos Toribio, the No. 6–ranked wrestler at 174 pounds, lost his match to No. 5–ranked Lou Puca, sophomore Dan Glinko secured the Bombers another victory with a 7–5 overtime win in the 184-pound bout.

Senior Shane Bartrum finished the competition with a 5–2 triumph in the 285-pound match in his final career match in Ben Light Gymnasium.

The Blue and Gold return to the mats for the NCAA Northeast Regionals from March 1–2 hosted by Wesleyan University in Middletown, Conn.

The men’s and women’s track and field teams competed Feb. 22 at the Cornell University Marc Deneault Invitational at Barton Hall in the last meet before the New York State Collegiate Track Championships.

The women’s team hit 15 ECAC qualifiers at Barton Hall. Junior Emilia Scheemaker won the triple jump with a mark of 11.63 meters. Freshmen Natalie Meyer and Brandy Smith each took second in their respective events. Meyer cleared 1.70 meters in the high jump, and Smith placed second with a 14.79-meter toss in the weight throw.

On the track, junior Leigh Martino finished the 500-meter run in 1:20.96. Both teams return to action Feb. 28 to March 1 at the NYSCTC Indoor Championships at St. Lawrence University in Canton, N.Y.

The men’s tennis team opened its 2014 season, losing all of six singles matches and two of three doubles matches to the University of Rochester on Feb. 22 in Glazer Arena.

Sophomores Joey Hanf and Chris Hayes had the Bombers’ only victory of the day, winning their doubles match 8–6. Though Hanf and Hayes took an early lead, the duo from Rochester battled back and forced the match to a tiebreaker. Hanf, however, secured the win with a well-placed serve, as he recorded the game-winning ace.

The Bombers did not have any other wins, but sophomore Zach Passman had one of the closest individual matches of the day, losing his first set 6–4 and his second 7–5.

The Blue and Gold return to action at 1 p.m. March 2, as they travel to St. Lawrence University in Canton, N.Y.

The men’s lacrosse team posted its first win of the season Feb. 25 at Higgins Stadium, defeating SUNY Oswego 18–7. After opening up a 4–2 lead, the Blue and Gold scored eight unanswered goals, taking a 12–2 lead into halftime. The Bombers led 16–4 after three quarters.

The Bombers return to action against No. 1–ranked Rochester Institute of Technology at 1 p.m. March 1 in Rochester, N.Y.

Freshman Grace Ayer accumulated 116 points for the Bombers, placing first in four of her seven total events. She earned the top spot in the 200-yard individual medley, finishing with a time of 2:05.13 and meeting the NCAA B qualifying standard.

The women’s squad swept the diving events for the meet, taking the top three spots in the 3-meter dive. Freshman Nickie Griesemer placed first in the event with a score of 541.00, setting a new championship record.

The men’s swimming and diving team finished second in the standings after four days of competition. The Blue and Gold finished with 1,325.50 points, trailing only Stevens which earned 1,412 points.

For the seventh-straight year, the squad has placed in the top three of the standings for the UNYSCSA meet. The South Hill squad set 12 new program records for the meet, including eight individual and four relay records.

Matt Morrison, who was named Diver of the Meet for the second straight year, earned the top spot in both diving events. Morrison’s preliminary score of 592.60 for the 3-meter dive marked a new college and meet record.

Both teams will host the NCAA Division III Diving Regionals from Feb. 28 to March 2 to try to qualify for the NCAA Championships.