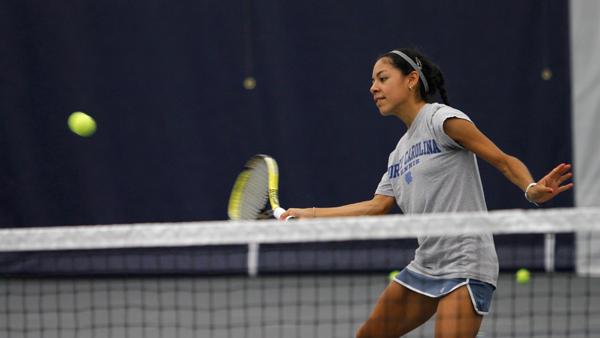 Amelia Marino/The Ithacan
Senior Christina Nunez prepares for a volley during a practice for the women's tennis team in the Athletics and Events Center this season. Nunez pulled off a come-from-behind three set victory to claim the New York State championship in first singles on Oct. 14.
By Kristen Gowdy — Staff Writer
Published: October 31, 2012

Every team’s goal at the end of the season is to hoist the championship trophy above their heads and celebrate the end on a high note. Most players are lucky to do this once in their four-year college career. But for the women’s tennis team, winning championships has become more of a habit than an anomaly.

On Oct. 14, senior Cristina Nunez won the New York State Division III championship in the first singles bracket. Nunez, who was seeded second, won her first two matches easily, but she needed a heroic effort to come back in the championship match.

After dropping the first set 2-6 to Skidmore College senior Nataly Mendoza, the Bombers’ senior roared back to take the second set 6-2 and set up a decisive third set for the the state championship. The two players struck back and forth in dramatic fashion, stretching into a super tiebreaker before Nunez finally prevailed 11-9 to take the match.

For Nunez, the victory was especially significant because she was coming off of a rotator cuff strain that had sidelined her the previous week.

“Coming back off my injury, I hadn’t played that many matches, so I was hoping to even be able to play in States,” Nunez said. “The break just motivated me to go out and do my best though.”

A week later, the Bombers won their eighth consecutive Empire 8 Conference championship against Stevens Institute of Technology 5-0. The blowout score did not tell the whole story, however, because the victory was no easy task for the Blue and Gold. Each of the team’s three doubles victories against the Ducks required extra games to decide a winner.

Senior Laurel Salladay, who contributed a victory for the Bombers at second doubles, said Stevens brought its best effort to the championship match in Mendon, N.Y.

“They were really fired up, and they came out hard and that just made us compete better,” Salladay said. “I think Stevens is a lot stronger in their doubles play, and they were fighting.”

Over the course of the season, each player on the team has had to step up in one way or another due to injury. Salladay is one of the players that stepped up when the South Hill squad lost one of its best players, Allison Young, to a back injury. Salladay moved up to play on the No. 1 doubles team alongside Nunez late in the season and also moved up one spot in the singles rotation for several of the Bombers’ matches.

Salladay said switching doubles partners was difficult, but she stressed the importance of teamwork and selflessness throughout the process.

“You want to play your best and when the team needs you, you don’t think about yourself,” Salladay said. “You just try to step up and be mentally prepared to play at any position at any time.”

When Young returned in time for the Empire 8 Conference tournament, Salladay readjusted to the second doubles position and played with her usual partner, freshman Marni Blumenthal. Salladay and Blumenthal scored a narrow victory against Stevens sophomore Danielle Stewart and freshman Julia Guignard by a score of 8-6.

Blumenthal said she didn’t expect to be playing in such high stakes matches in her first year on the team. Now that she’s tasted success, the freshman said she wants to make sure she’s prepared to stay in championship form for the spring season.

“I just want to work out and keep working hard,” Blumenthal said. “I think everyone is very motivated in our training to keep up with our tennis in order to do well next season.”

Salladay said the seniors’ last win as Bombers was well worth the hard work and the multiple adjustments in the roster. She also said the South Hill squad’s run of eight straight Empire 8 championships increased the pressure on the team to keep the success going.

“You never want to be the team that breaks the streak,” Salladay said. “We worked hard, and I think we deserve it. Last year, the seniors teared up when we won. I didn’t, but I got that feeling. It’s an amazing feeling.”