Bombers football team out to revive reputation this season 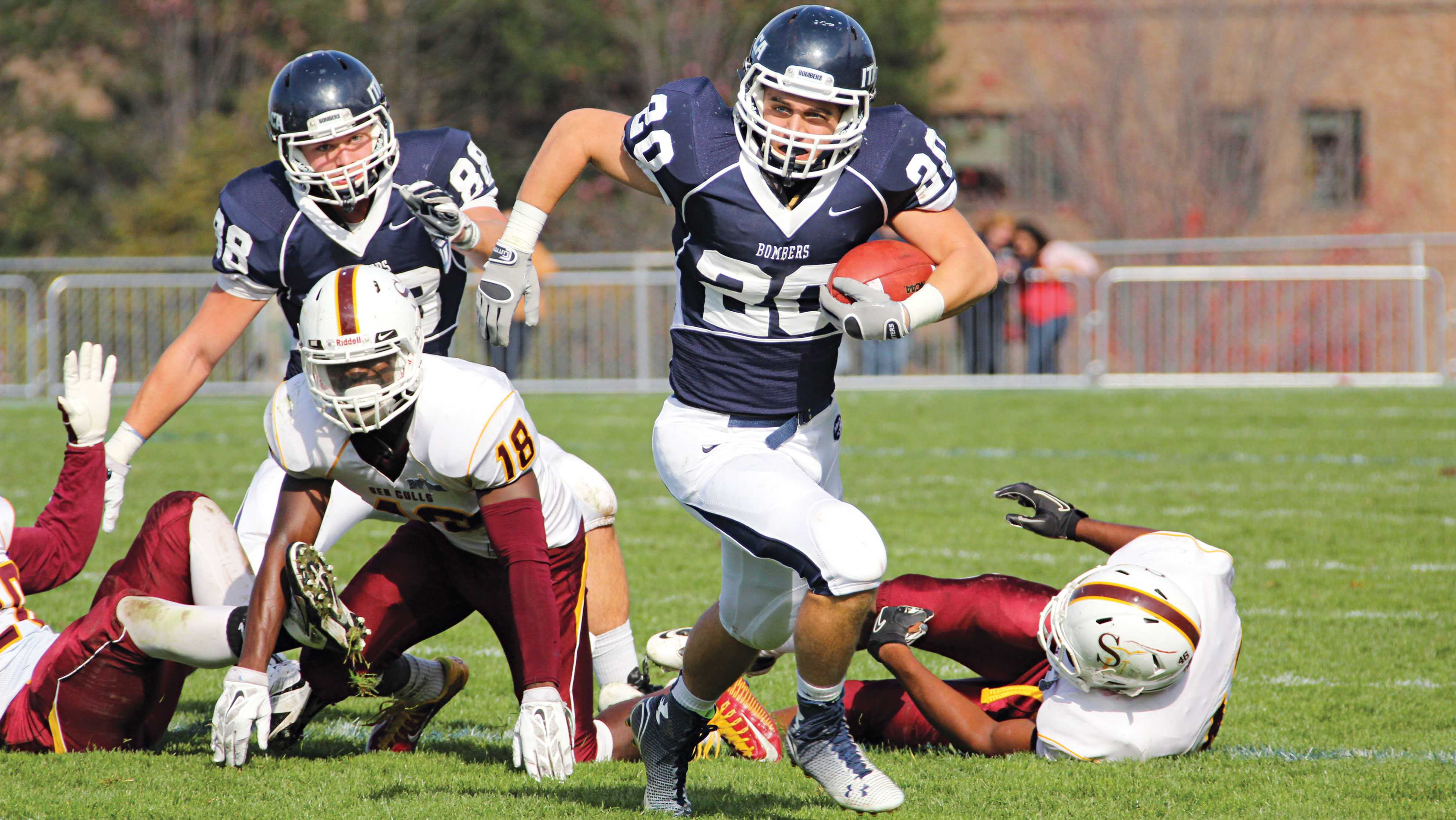 It is remarkable how a single game — a single play for that matter — can define a team’s season. Unfortunately, that happened to be the case for the football team last year.

After stifling St. John Fisher College to clinch a share of the Empire 8 conference title, the Bombers lost a heartbreaker to SUNY Cortland in the Cortaca Jug game on a botched field goal attempt in the final seconds.

The Bombers’ 7–3 record at the time was still good enough to qualify the team for the NCAA championship tournament. They duked it out against then-ranked No. 7 Hobart College and lost a nip-and-tuck contest, bowing out in the first round.

The two losses to conclude the South Hill squad’s season clouded what started out as a bright, promising campaign.

With their final team record tallying at 7–4, the Blue and Gold won the Empire 8 conference for the second year in a row. More importantly, two years ago, the college won its first conference championship since 2008, and this past year’s squad won consecutive conference titles since its string of four from 2002–05.

Though the two losses to Cortland and Hobart muffled the college’s progressive success, the Bombers look to break down the door this year and continue the program’s resurgence as a conference powerhouse. 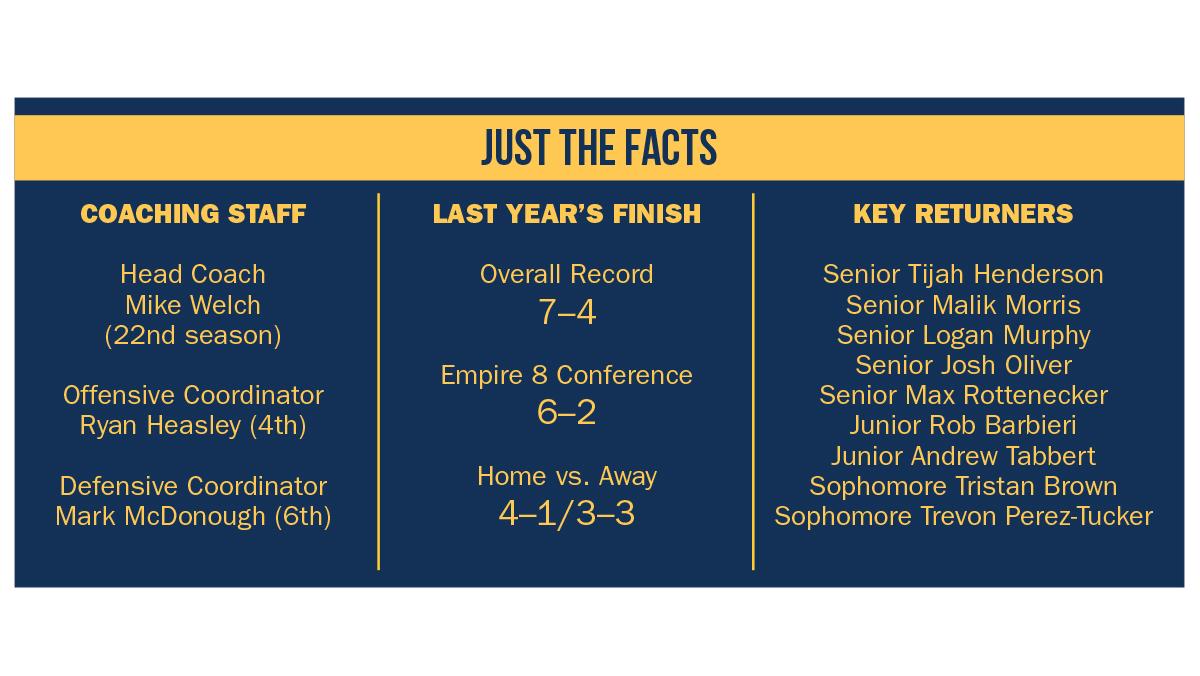 The Blue and Gold’s offense averaged 25.6 points per game in 2014, which was sixth-best in the Empire 8, and will have some fresh faces this season, particularly in the quarterback position.

Both starting quarterback Tom Dempsey and backup quarterback Ryan Condon graduated, meaning there will be a new maestro conducting the Bombers’ offense in 2015.

Welch said he has not named his starting quarterback for week one.

“We have some pretty good players [at the position],” Welch said. “I’m confident in whoever is going to be the number–one guy; he will be ready to go and be able to run our offense.”

Seniors Joe Bianchino and John D’Onofrio, as well as juniors Conor Herr, Michael Rabasca and Wolfgang Shafer, are competing for the top spot.

Though the offense last season excelled in the passing game, ranking fourth and third in the conference, respectively, with a 66.2 percent completion average and a passing efficiency of 146.7, Welch said the offense was inconsistent at times over the course of last season.

“Offensively, we had some areas that hurt us,” he said. “We should have had more success in the red zone … We need to run the ball better. Those are all the things we are looking to improve on this year.”

Welch said the running game is key to the success of the offense this upcoming season.

“We didn’t average very well in terms of our average per rush, so that needs to be better this year,” Welch said. “If we could raise that level up, I feel confident that the rest of the offense will follow.”

The running attack averaged 2.9 yards-per-carry last season, which ranked second-to-last in the Empire 8.

Welch said it boils down to execution in order to elevate the consistency of the running game.

“We play some very good defenses, especially in the Empire 8,” he said. “I think there are some of the top defenses in the country there, which includes ours. Every Saturday is tough. We’ve got to get better in our technique and our ability to run the ball. I don’t think it’s so much of changing our schematics, but execution.”

Sophomore Tristan Brown returns to the squad as the team’s leading rusher after the previous season in which he galloped his way to 591 yards and four touchdowns while rushing for an average of 4.8 yards-per-carry.

The strengths of the offense can be found in the receiving corps and the offensive line, which encompass the bulk of the veteran presence on the offensive side of the football.

The team’s receiving corps is highlighted by Josh Oliver, Preseason All-American senior kick return specialist, wide receiver and running back, who racked up over 1,000 all-purpose yards in 2014.

The offensive line returns 10 players — nine of them upperclassmen — from a unit that ranked in the top 50 in the nation in pass efficiency.

“We have good people at those positions,” he said. “They are ready for their opportunities. That’s our program — we graduate 20 to 30 seniors every year, and a lot of them have been starters. We expect people to perform at that same level.”

The Bombers’ defense in 2014 proved to be one of the stingiest in the Empire 8. The defense ranked first in the conference in touchdowns allowed with 24 and second in points-per-game with 17.2.

Logan Murphy, senior co-captain and defensive lineman, said he was proud of how the defensive unit rose to the occasion and silenced the naysayers.

“Everyone was saying how we were going to have a setback because we lost [several] starters,” Murphy said. “We just showed everyone that we don’t take steps back. When we exit the chamber, we reload.”

The Blue and Gold’s defense was gritty against both the pass and the run last season. The team finished at the top of the conference with a passing efficiency of 98.1 and tied for first in yards-per-attempt with 5.7. The defense also ranked third in yards-per-carry as it surrendered an average of 3.4 yards.

Rob Barbieri, Preseason All-American junior defensive lineman, said the tenacious play by the defense can be attributed to the philosophies of defensive coordinator Mark McDonough.

“He wants us to play tough,” Barbieri said. “He says, ‘You play IC tough!’ We stop the run, and we limit the big plays. Those are some big principles that he instills in us. We take a lot of pride in bringing effort to every single game.”

Despite the success, Malik Morris, senior co-captain and defensive back, who was also named a Preseason All-American, said the defense needs to be more relentless with turnovers in 2015 in order to ramp up the intensity of the unit.

The only potential question about the defense is in the secondary. The team graduated one of its top cornerbacks in then-senior Sam Carney as well as one of its top free safeties in Anthony Domenick.

Murphy said the secondary should not be an issue this season.

“I think that [the coaching staff] being the motivating factors and the senior defensive backs motivating the younger [defensive backs] to step up and play confident in their abilities, we should be a solid defense,” Murphy said.

One of the biggest strengths of the Bombers’ defense will be its defensive line, which will be lead by Murphy, Barbieri and senior Tijah Henderson. All three linemen combined for 72 total tackles and 5.5 sacks last season.

Murphy said the chemistry among him, Barbieri and Henderson will add a significant advantage to the defensive frontline.

“When you add all those connections together, you are going to get something good,” Murphy said. “I think you can expect big things from us this year.”