Blue and Gold gear up for summer collegiate baseball leagues 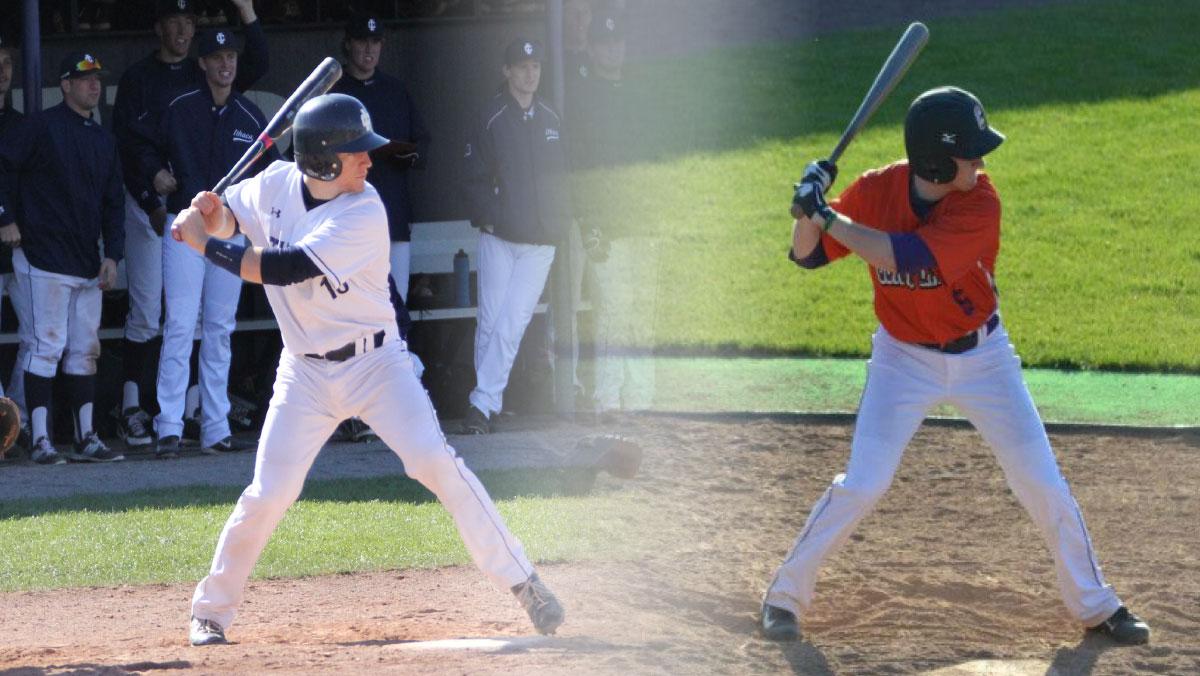 L: Caitie Ihrig/The Ithacan, R: Courtesy of Josh Savacool
Sophomore second baseman Josh Savacool stands in the batter's box during a game at Freeman Field at left, and at right continues to play in the summer with the Cortland Crush.
By Jonathan Beck — Assistant Sports Editor
Published: April 29, 2015

Many college baseball players have a dream of playing on a hot summer day with the sun on the back of their necks, watching the game from the bench without a care in the world. The words “baseball” and “summer” have, to some extent, become synonymous with each other. For some Ithaca College student-athletes, they can make that dream come true by playing in wooden bat leagues during the summer months.

The purpose for summer collegiate baseball is to allow the best college players to compete against one another to further develop their skills. There are 37 leagues that operate throughout the country to allow college baseball players the experience of experimenting with wooden bats, rather than aluminum bats that are used competitively with the NCAA. Several of these leagues are located in the State of New York, such as the New York Collegiate Baseball League and the Perfect Game Collegiate Baseball League.

A number of current Ithaca College baseball players take part in these leagues, including senior first baseman Brian Burns. Burns, who has participated in the NYCBL with the Syracuse Jr. Chiefs the past two summers, said it became customary for him to play summer ball even before he arrived at the college in 2011. As with most college players, Burns grew up playing in Little Leagues during the summers before continuing on to middle school, high school and college.

“It’s just how I grew up,” Burns said. “It’s almost like we wouldn’t know what to do with our time if we didn’t play summer baseball.”

Burns’ teammates, senior catcher Cooper Belyea and junior pitcher Ryan Contegni, also played on the Jr. Chiefs with him in 2014.

During the summer, teams play close to 50 games during a two-month span, unlike during the school year when they play roughly 30 games across four months. Burns said the experience overall has been rewarding; however, playing every day has taken a toll on his body over time.

“I think mentally and physically it’s just as much a grind as the school season, if not more,” Burns said. “It’s hotter days, it’s 85, 90 degrees, six days a week for the most part. It’s a compacted season. It wears you down still.”

In the early 1990s, Major League Baseball created several leagues for the regulation of player development in summer collegiate baseball. The MLB began subsidizing the summer leagues with the intention that student-athletes would not fall behind players coming up through the minor leagues right out of high school or from another country.

Current MLB players such as Hunter Pence, J.D. Martinez, Tim Hudson and Mike Fiers stemmed from these leagues during the beginning of their young careers.

Burns said when he first heard about the NYCBL as a sophomore, he wasn’t promised much time playing first base. Despite this, he improved his play and soon became an everyday starter. The following season, as a junior, his summer coach asked him to be captain, and as a result, he built many leadership qualities that he translated to the Bombers’ squad. He said the most difficult aspect he faced as a captain was getting all of his summer league teammates on the same page.

“The biggest challenge I’ve found is everyone’s motivation levels,” he said. “Some people are really just there to sharpen their skills as a player rather than buying into the whole team aspect, so just getting people to buy into, ‘Hey, we still gotta win games, I don’t really care how you guys do it, we’ve got to find a way to put runs up.’”

Ithaca College head coach George Valesente said there are many benefits to playing in a summer league, such as the more upper-level style of play offensively and defensively. He also said for some players, there is increased pressure to succeed playing in front of scouts.

“The scouts put a lot more emphasis on what they see them do in the summertime and how they see them handle wooden bats,” he said. “There have been a lot of hitters in Division I who have had fantastic years, hit lots of home runs, but never made it past the Double-A level.”

Student-athletes from the Empire 8 conference make up a majority of the upstate New York leagues and often compete with one another on the same team or on opposing squads. Burns played with people from all around the country, including many in the Empire 8 conference, such as Seth Cornell from Houghton College, who placed fourth for the Pitcher of the Year in the NYCBL in 2014.

Matt Colbert ’14, who was recently hired as the new head coach of the Jr. Chiefs, played on the 2013 Division III College World Series team for the Bombers. Colbert said playing with other players from the conference happens often, and it also creates a unique chance to learn to play together.

“There’s reputation involved with the schools you play against all season, and then when you finally get a chance to play with these guys for the entire summer, it’s a good opportunity to get to know them and to become friends, and I think that carries over to the following season when you play against them,” he said.

Sophomore second baseman Josh Savacool played for the Cortland Crush in 2014 and said playing with and against his Empire 8 foes was enjoyable.

“It was kind of cool to see what their perception of us as a team was and compare it [to] what we think of them,” Savacool said. “It was weird at first, but then once you get to know them, it doesn’t even matter.”

Freshman pitcher Jim Sinopoli will make his college summer league debut in 2015, after making the Jr. Chiefs’ roster. Sinopoli, who has appeared in three games with one start for the Bombers as of April 27, said he is excited about the opportunity to get more chances to pitch.

“I think the main point of summer baseball is take what you’ve learned all spring and to also take what you need to work on,” Sinopoli said. “Always making strides to become better.”

However, for pitchers, arm injury rates are at all-time highs at all levels of baseball, according to the American Sports Medicine Institute. In addition, a number of baseball players are undergoing Tommy John surgery, a procedure to reconstruct a torn ulnar collateral ligament in a pitcher’s elbow. The average fastball velocity has increased significantly over the years, and pitchers don’t just throw fastballs and curveballs anymore. The heavy specialization of cutters, sliders and splitters earlier in their careers means they are coming into college with more accumulated wear and tear on their bodies. Thus, playing during the summer after coming off almost nine months of action can cause physical problems for college baseball players.

Although he encourages every one of his teammates to join a summer league, Burns said there are many cases where they are better off not participating in a summer league. For example, senior closer Jimmy Wagner has taken the last few summers off to rest his arm.

Sinopoli said although he is aware of the injury risk that comes with playing summer ball, it is not going to affect his mentality heading into the summer.

“The only way to get better is to play, so you have to accept the risk and understand they’re there, but you also have to be smart about it,” he said.

Colbert said he often has to adjust how he recruits athletes to play in the summer depending on how they did in their spring season.

“As a coach, we’re signing kids in the fall, so it’s up to us to keep an eye on these guys throughout their spring season,” Colbert said. “There’s a lot of instances where if a pitcher was to come to me with 75, 80 innings pitched on their college season, their coach will say, ‘He threw a lot this year, we’re not going to expect him to [pitch],’ so there’s a lot of late drops. We’re left having to fill voids on our roster that try to make up for that.”

All in all, Burns said he has appreciated his time with the NYCBL.

“You can only play this game for so long,” he said. “The relationships that I’ve built with other people at other schools that I never thought I’d ever get in touch with has been a pretty cool experience. I would definitely recommend it to other people.”