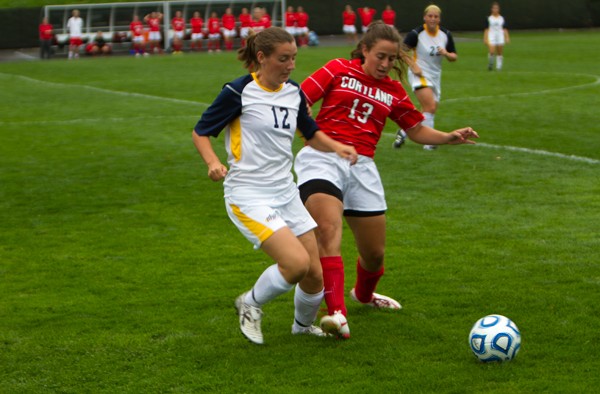 Though the women’s soccer team put 12 shots on net against Route 13 rival SUNY-Cortland, they only needed one goal to bring home the win in a 1-0 shutout victory on a rain-soaked Tuesday on Carp Wood Field.

Callanan said the rainy weather encouraged the Bombers to place more shots on the net, because the slick ball was harder for the goalkeepers to control.

“It was on everyone’s mind that we were getting shots on frame, so we could follow up and get the rebounds,” she said.

For the third straight game, the Bombers’ senior goalkeeper Becca Salant recorded a shutout — her fifth of the season. The Blue and Gold defense swarmed the Red Dragons’ attack, especially in the second half, allowing only one shot on Salant.

Senior defender Megan Palladino said it was an emotional game, given the circumstances of the rivalry and the narrow lead they were protecting.

“We knew Cortland was going to be a tough team, and we knew our defense would have to be on our toes,” she said. “We just tried to win every 50/50 ball, and that’s always one of our goals every game.”

With a perfect 7–0 record, the Bombers will face their next test when they travel to face new Empire 8 foe Houghton College at 2 p.m. Saturday in Houghton, N.Y.

Despite a win against their rivals and a top-10 ranking in the D3 soccer polls, Head Coach Mindy Quigg said her team is not thinking about its undefeated record.

“It’s still early in the season, and we have a long way to go to reach the goals we set out to achieve this season,” she said.