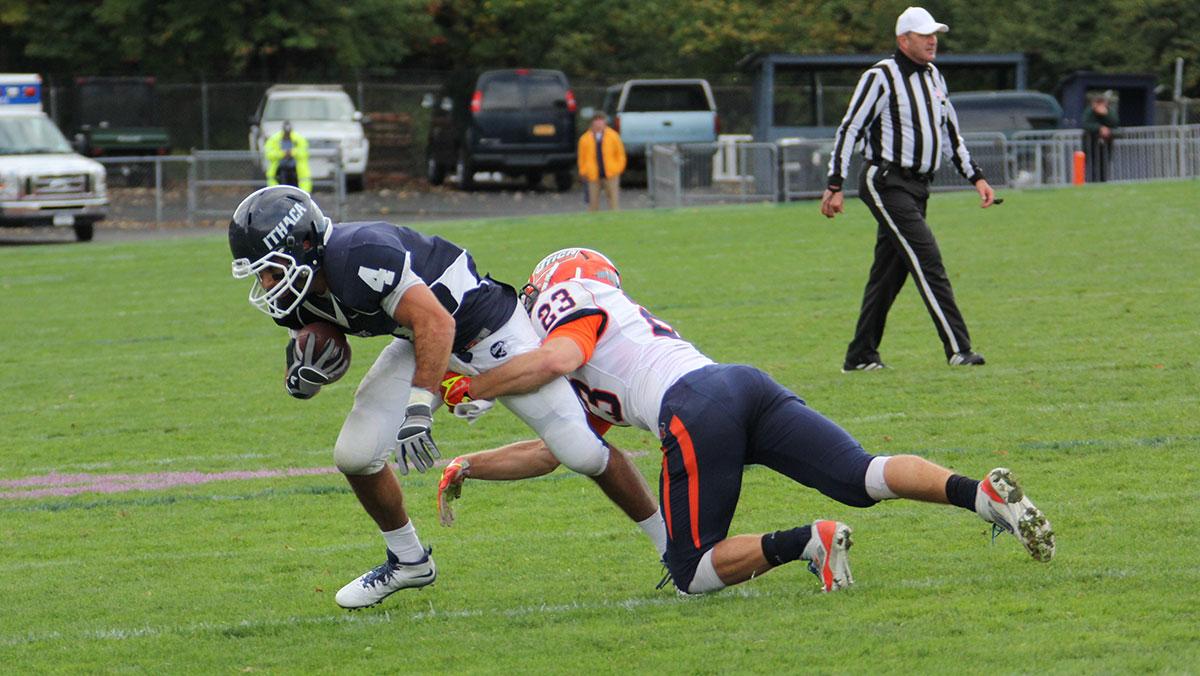 The football team continued its perfect start to the regular season with a 27–10 win against the Utica College Pioneers on Oct. 4 at Butterfield Stadium.

The Bombers (4–0, 3–0) scored 21 unanswered points to pull away from the Pioneers. Senior quarterback Tom Dempsey threw touchdown passes to senior wide receivers Chris Bauer and Vito Boffoli, and junior cornerback Ryan Michaels recovered a blocked punt for a score. The Blue and Gold surged to the top of the Empire 8 standings as the lone unbeaten team in the conference after St. John Fisher College lost 37–34 in overtime to Salisbury University. Bombers head coach Mike Welch downplayed the significance of the early season standings and focused on his team’s combined efforts in the win.

“This is a good football team, they’re 4–0,” Welch said. “We knew we had to stop their offense and I thought offensively we did some good things. Tom hit a couple of explosives and a couple of guys made some key catches. I like what we’re doing.”

The Bombers were aided by the news that Pioneers senior wide receiver Anthony Acevedo had suffered an undisclosed injury that rendered him unavailable for the game. Utica struggled to replace him and was forced into running more short passing plays as Pioneers senior quarterback Conor Butkiewicz only completed 20 of his 44 passes for 153 yards. The entire Bomber defense contributed toward shutting down the Pioneer passing attack, with seven different players recording a combined 13 pass breakups. Senior cornerback Sam Carney said the defense did not change its game plan after hearing the news that Acevedo would be out.

“It is what it is,” Carney said. “It didn’t really change the game plan for us, they still ran the same stuff whether he was in there or not.”

Though the Bomber defensive line recorded five pass breakups, it lost its most senior member as senior Logan Murphy left the game on crutches from an apparent injury to his right knee. Welch said he did not want to speculate on the injury but did add that it looked very serious. Sophomore defensive end Andrew Homkey saw more playing time as a result of Murphy’s injury and recorded three tackles and two breakups.

Homkey was not the only underclassman to make a key contribution, as freshman cornerback Trevon Perez-Tucker blocked a punt and had a kickoff return for a touchdown negated by a penalty. Michaels recovered the blocked punt and returned it 19 yards to give the South Hill squad a 21–3 lead. Perez-Tucker said he technically was not supposed to rush the punter but saw an opening. Despite his performance on special teams today, he will remain Carney’s backup.

“We’re going to switch on and off, and it depends on how his ankle feels,” Perez-Tucker said. “It’s going to be me or him but it really depends on him. It’s his spot, I’m the backup.”