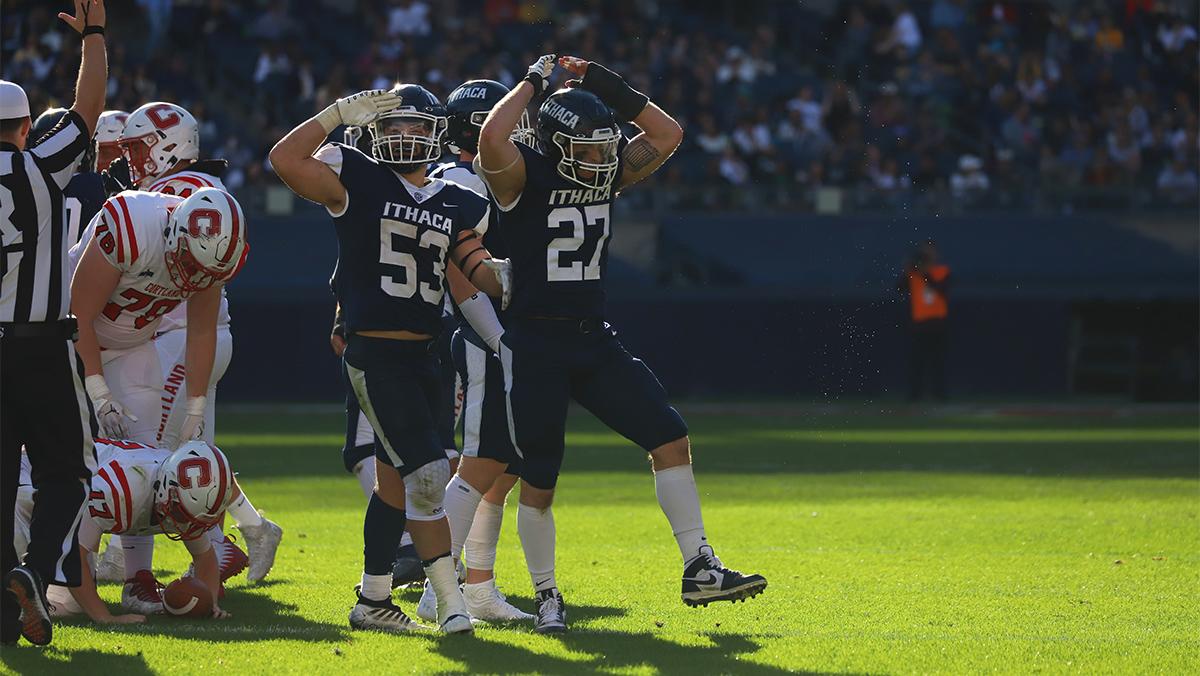 On Nov. 12, 40,232 people filled the stands at Yankee Stadium to witness the 63rd annual Cortaca Jug game. Under sunny skies, despite the threat of rain the night before, the 9–0 Ithaca College Bombers and 9–0 SUNY Cortland Red Dragons kicked off, both with hopes of finishing their seasons at a perfect 10–0.

When the clock hit zero at the end of the fourth quarter, the Bombers had come out on top for the 38th time in the rivalry’s history with a 34–17 win. The 10–0 record marked the first time since 1986 that the program ended its regular season without a loss.

Senior quarterback A.J. Wingfield, who went 18-for-20 with 209 yards and three touchdowns to go along with 28 yards on the ground, lauded the tens of thousands of fans who showed up for both sides. Although the attendance number did not break the Division III record of 45,161 set by the Cortaca Jug game at MetLife Stadium in 2019, it was good enough for the second-highest mark.

“The crowd was electric,” Wingfield said. “They got really loud and we talked about it all week [that] the emotions are going to be high.” 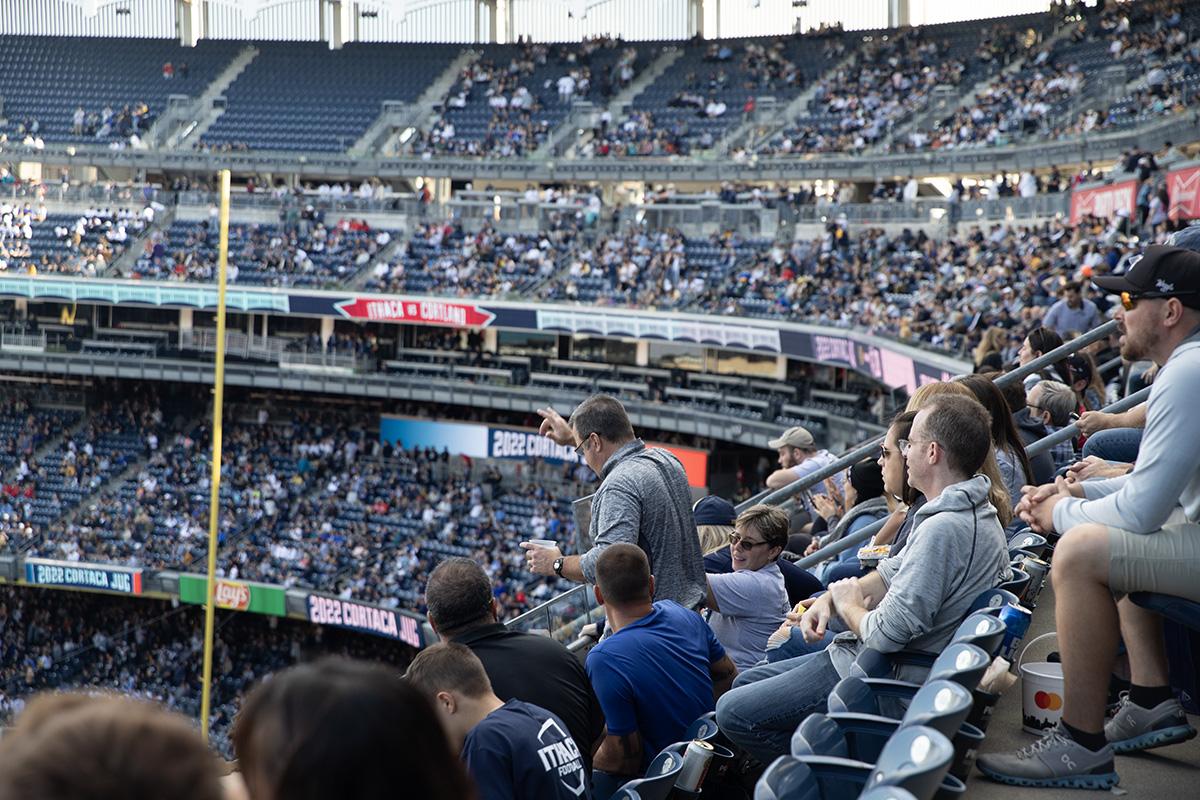 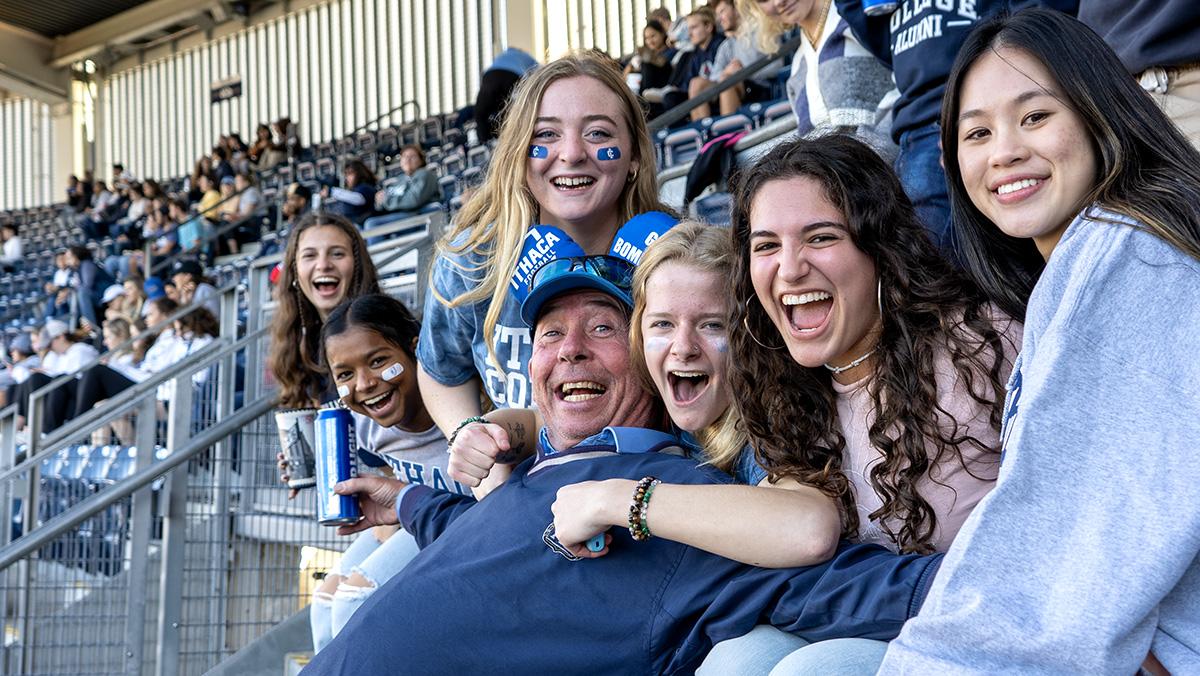 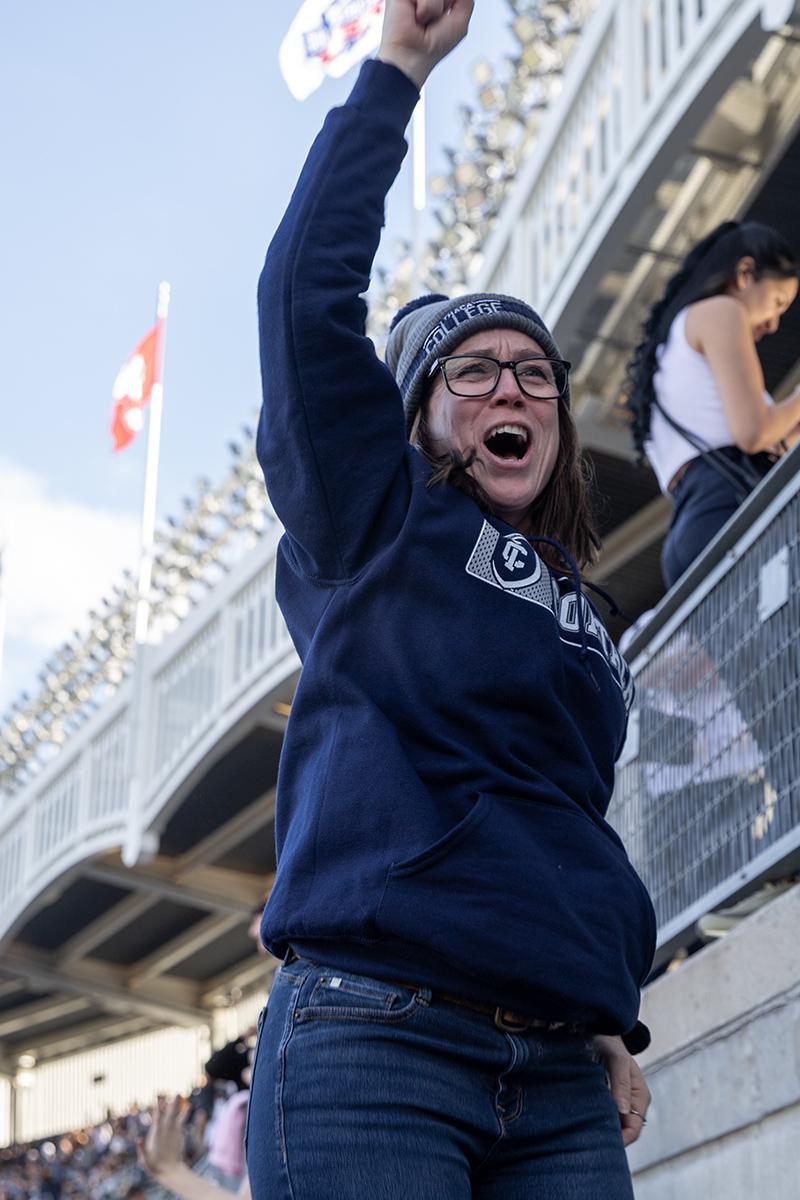 Jeanette Pursell shows her support and enthusiasm for the Bombers performance at the 63rd Cortaca Jug game. XIAOYI ZHANG/THE ITHACAN 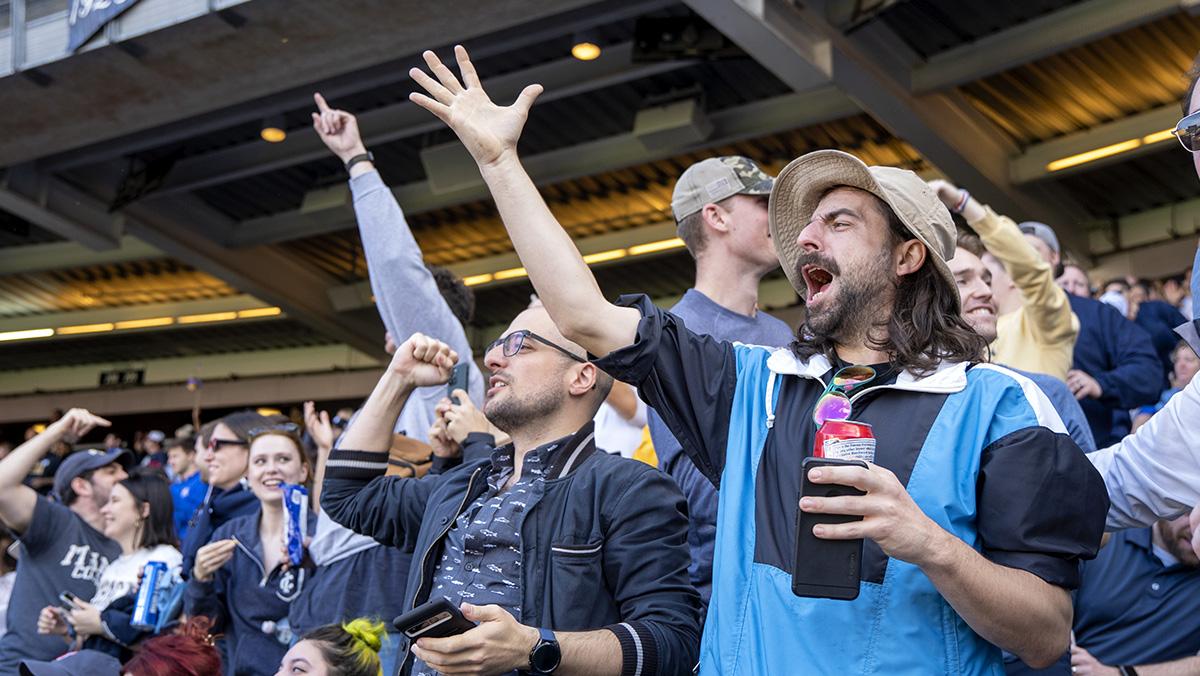 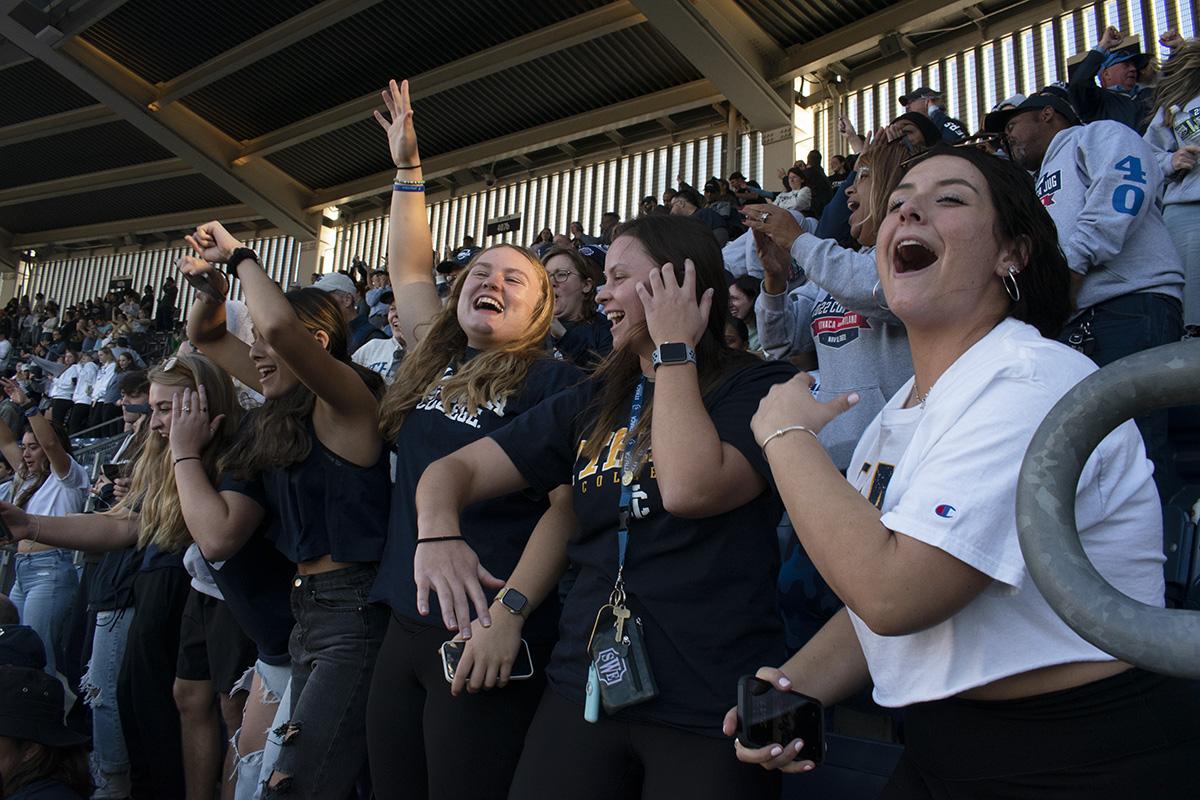 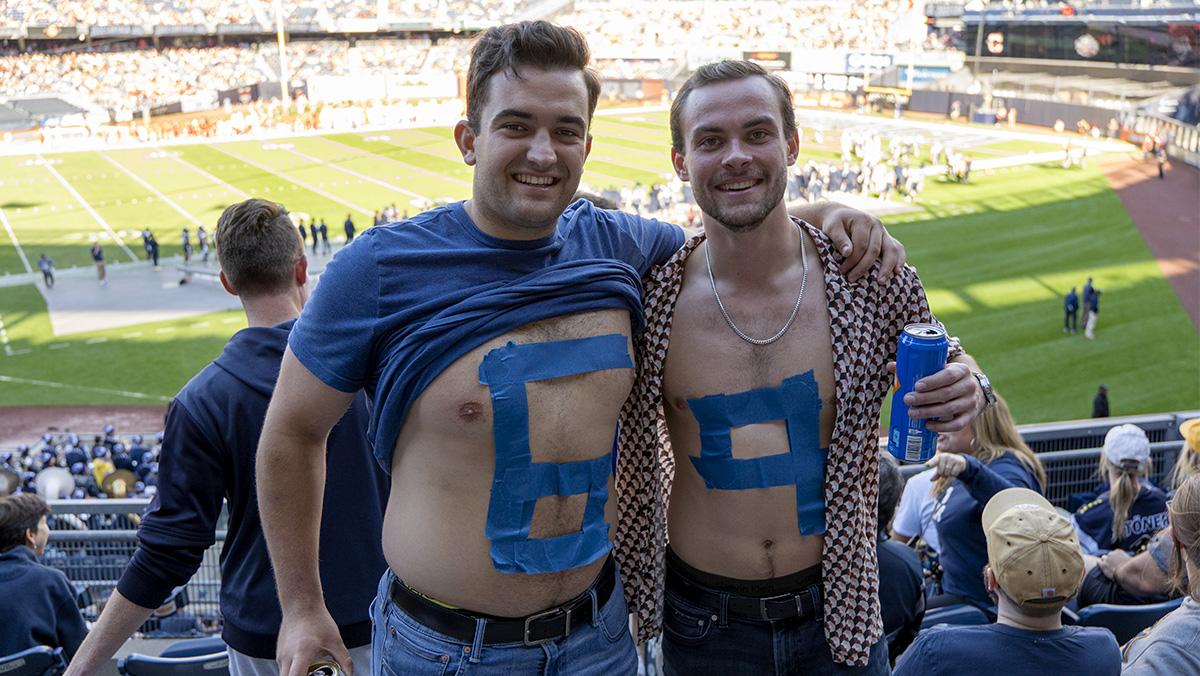 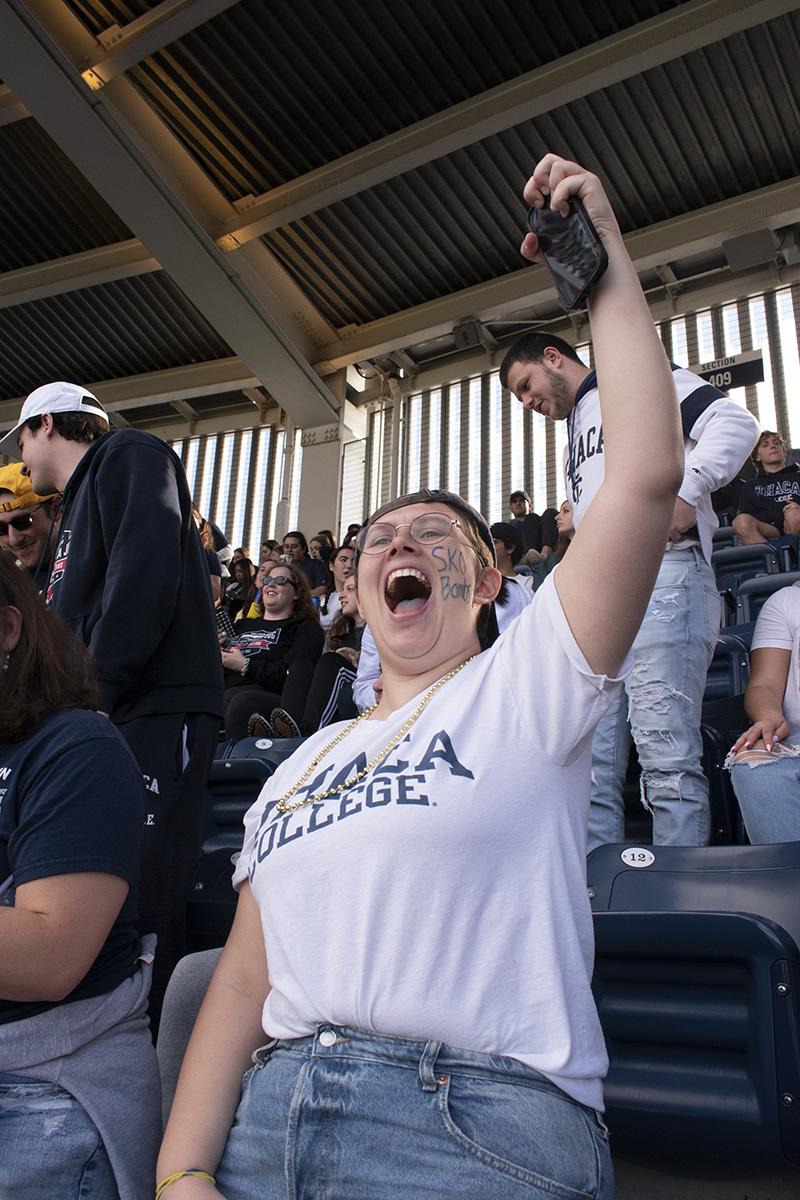 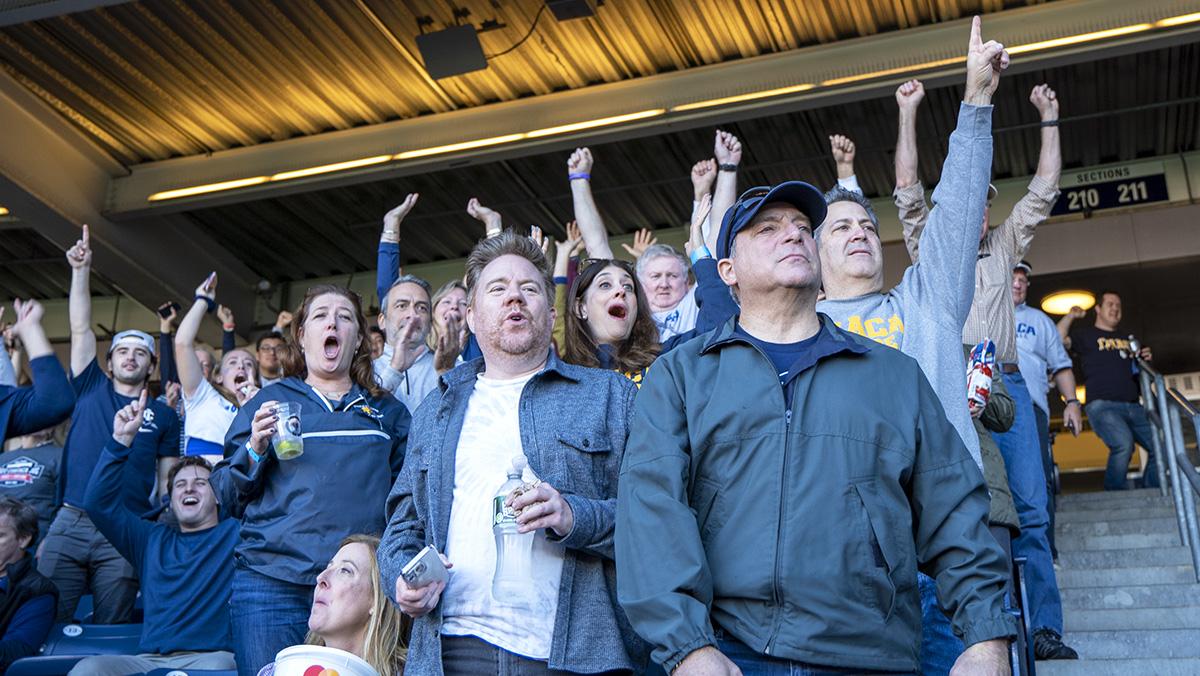 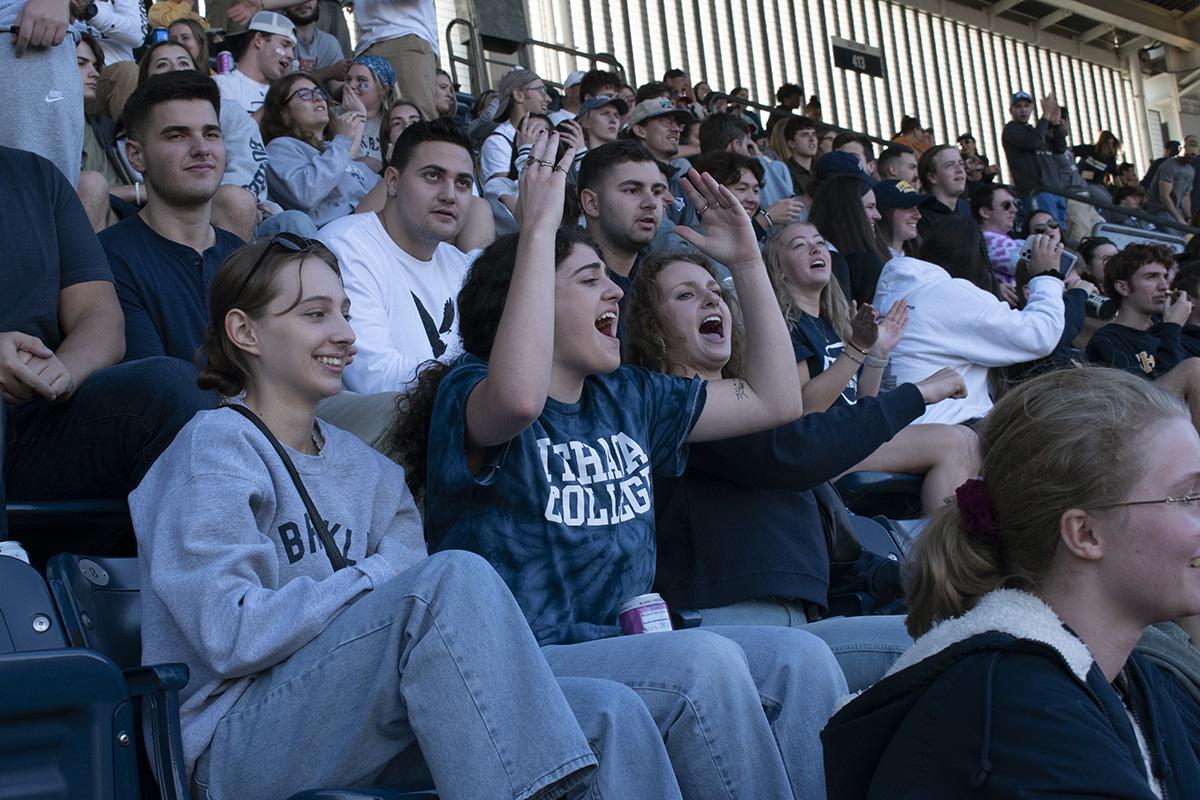 Sophomore Carolina Cedraschi said she does not know much about the rules of football, but she still had a great time at the game because of the people around her.

“I had a great view, I had good food, I cheered, I had so much fun,” Cedraschi said. “The atmosphere and the vibe of, you know, school spirit [was great]. … People were doing the wave in the stands! I had a really good time and it was so much fun.”

In addition, the game was broadcast by YES Network, who brought in NBC sports anchor Bruce Beck ’78 to call the game alongside students. Senior Jeremy Goldstein, who was the football play-by-play announcer this season for Bombers Live on ICTV, said it was surreal to be able to call a game on YES and to do it with someone like Beck.

“It was on my lifetime bucket list to call a game for that network,” Goldstein said. “[And] Bruce Beck was actually a mentor of mine for a long time. … I’ve known him for a while and it was almost like it was a full-circle moment for me.”

When the game started, the Bombers struck first with 10:31 remaining in the first quarter, taking an early 7–0 lead over the Red Dragons. Wingfield completed a screen pass to junior running back Jake Williams, who made his way into the right corner of the end zone for a 10-yard touchdown.

Williams led the team in both rushing and receiving yards in the game, with 70 and 63 yards respectively. He also accounted for scores both in the air and on the ground. His production in the air was uncommon for him this season — in the previous nine games, he had tallied just 66 receiving yards and did not gain more than 25 yards in a game through the air.

While Williams said he was not expecting to play a role in the passing game, he said he knew anything could happen in a game against such a highly ranked opponent.

SUNY Cortland answered back later in the quarter, tying the game at 7–7 with 3:25 to play. Sophomore quarterback Zac Boyes evened the score by finding junior wide receiver J.J. Laap in the left corner of the end zone.

The South Hill squad got the lead back with just 0:05 left in the first quarter, taking a 10–7 advantage on a 37-yard field goal by senior kicker Nicholas Bahamonde. In the second quarter, the Bombers extended their lead again as Wingfield completed a screen pass to senior wide receiver Michael Anderson, who hustled past the goal line for a 12-yard touchdown and made it 17–7.

Down 10 with a chance to make it a closer game, Boyes and the Red Dragons offense stalled not once, but twice, with back-to-back drives ending in turnovers, including a goal-line interception by the Bombers’ senior linebacker Matt DeSimpliciis with 11 seconds to go in the half. 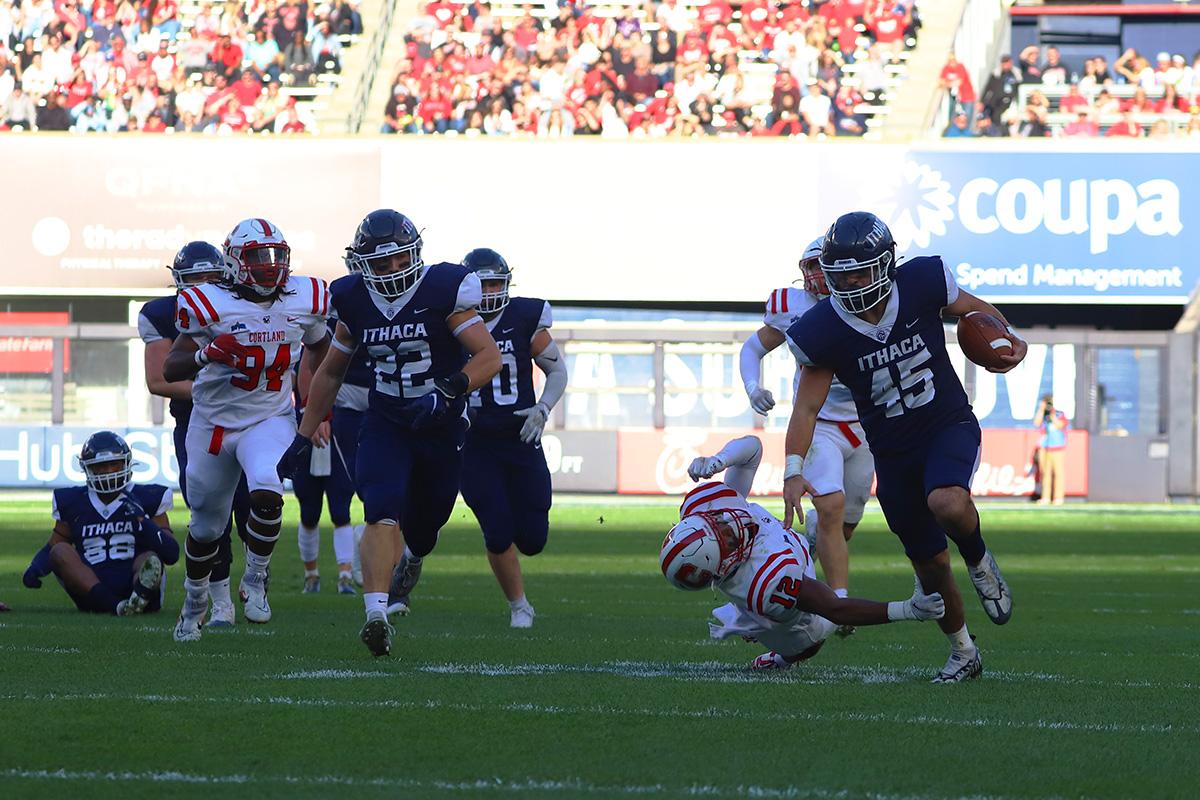 Junior running back Jake Williams shoves a defender out of his way as he rushes for a touchdown. BRENDAN IANNUCCI/THE ITHACAN 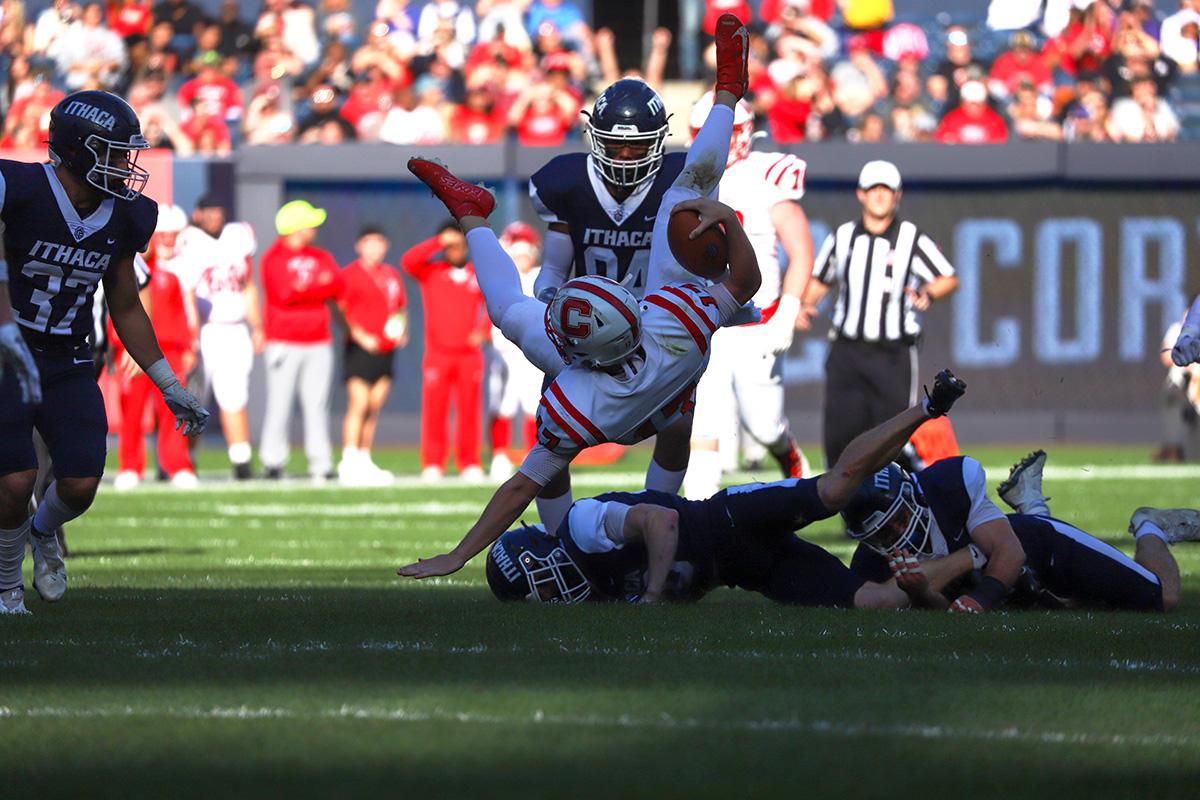 SUNY Cortland sophomore quarterback Zac Boyes gets upended by senior Kevin Schoch, a defensive back for the Bombers, during the 2022 Cortaca Jug game. BRENDAN IANNUCCI/THE ITHACAN 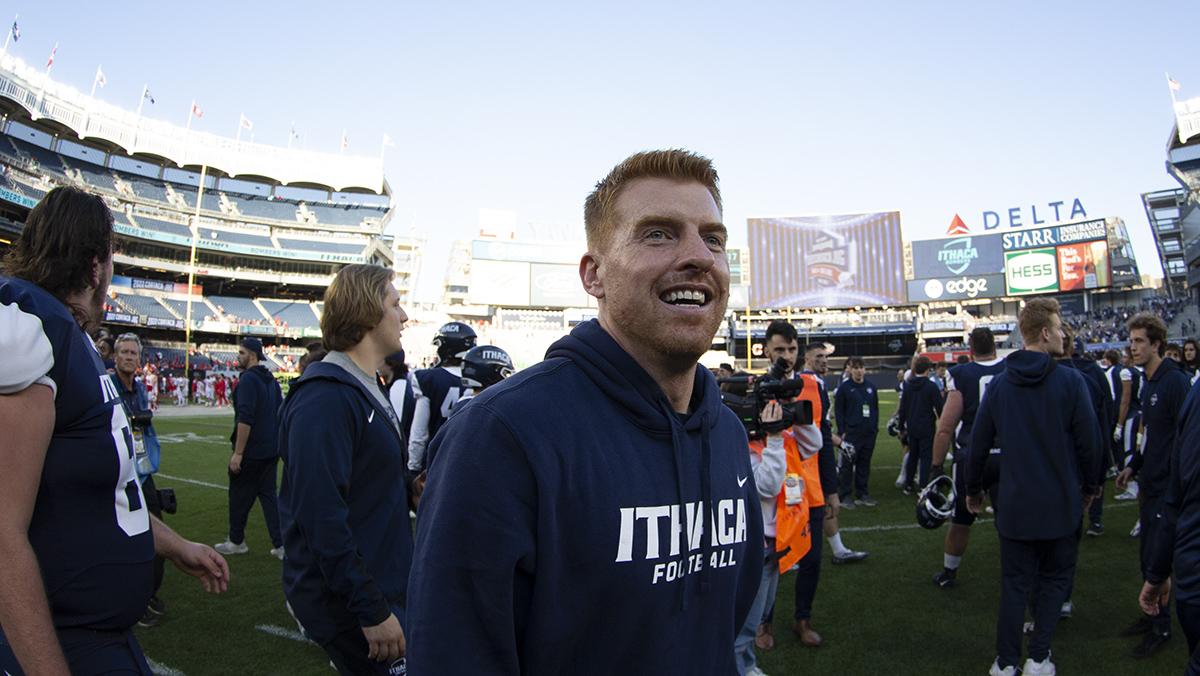 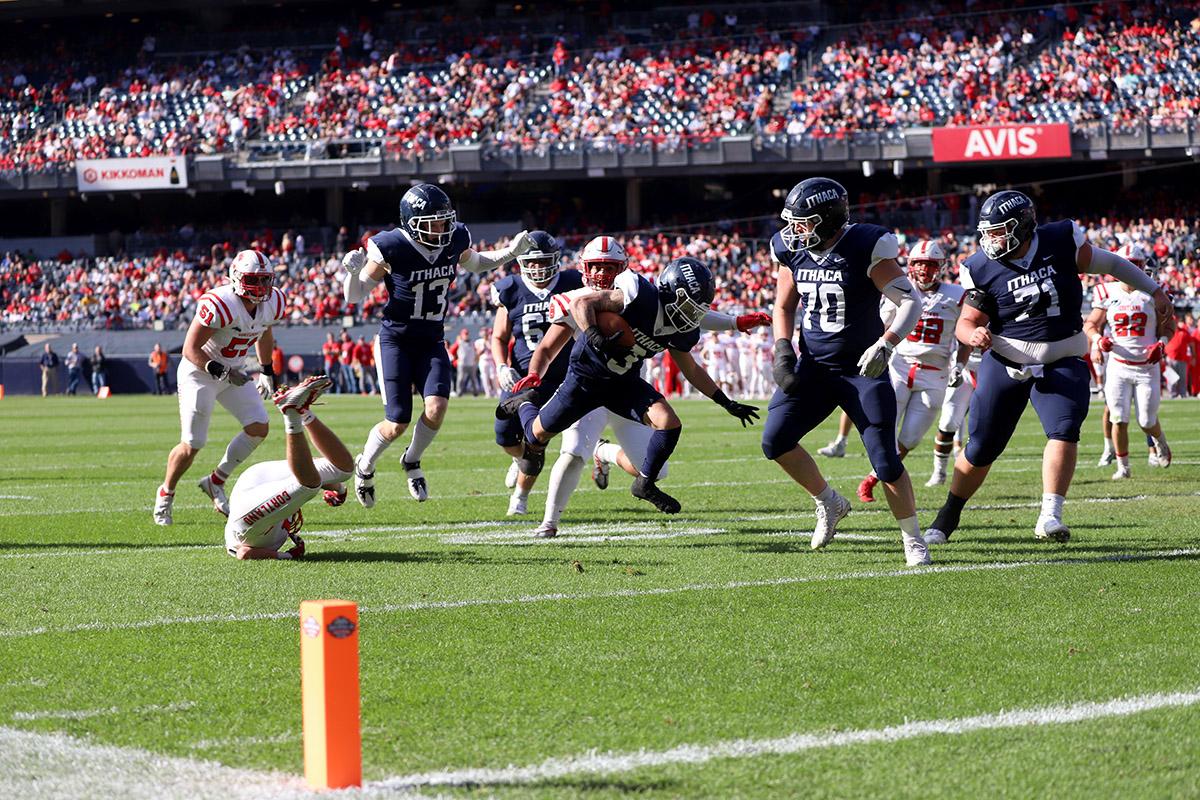 Senior wide receiver Michael Anderson of the Bombers stumbles toward the end zone in the first half. BRENDAN IANNUCCI/THE ITHACAN 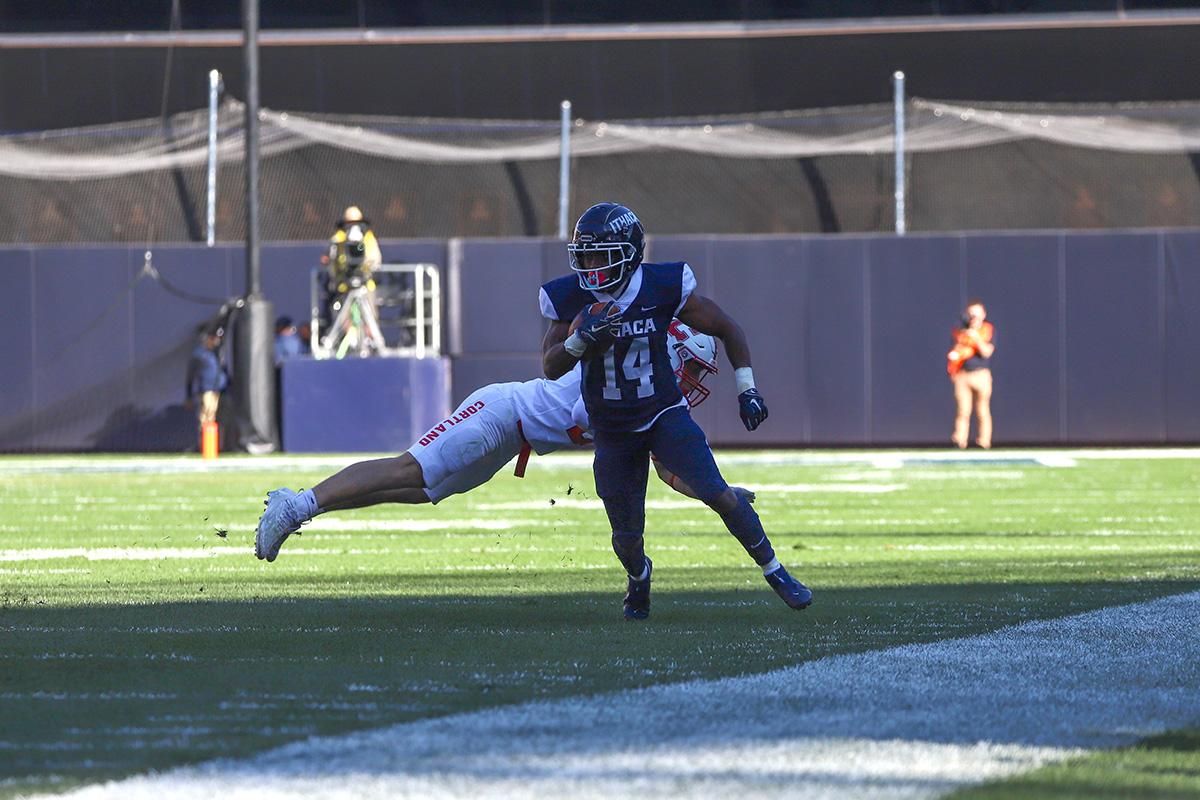 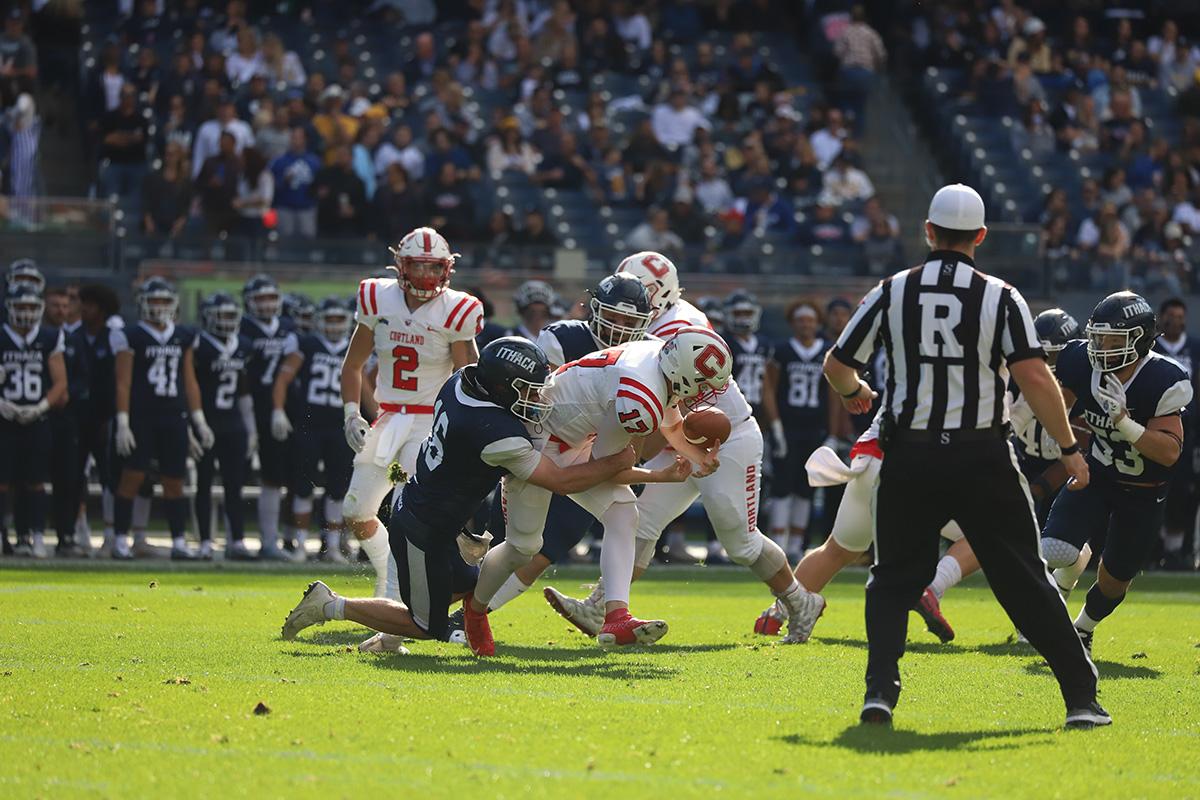 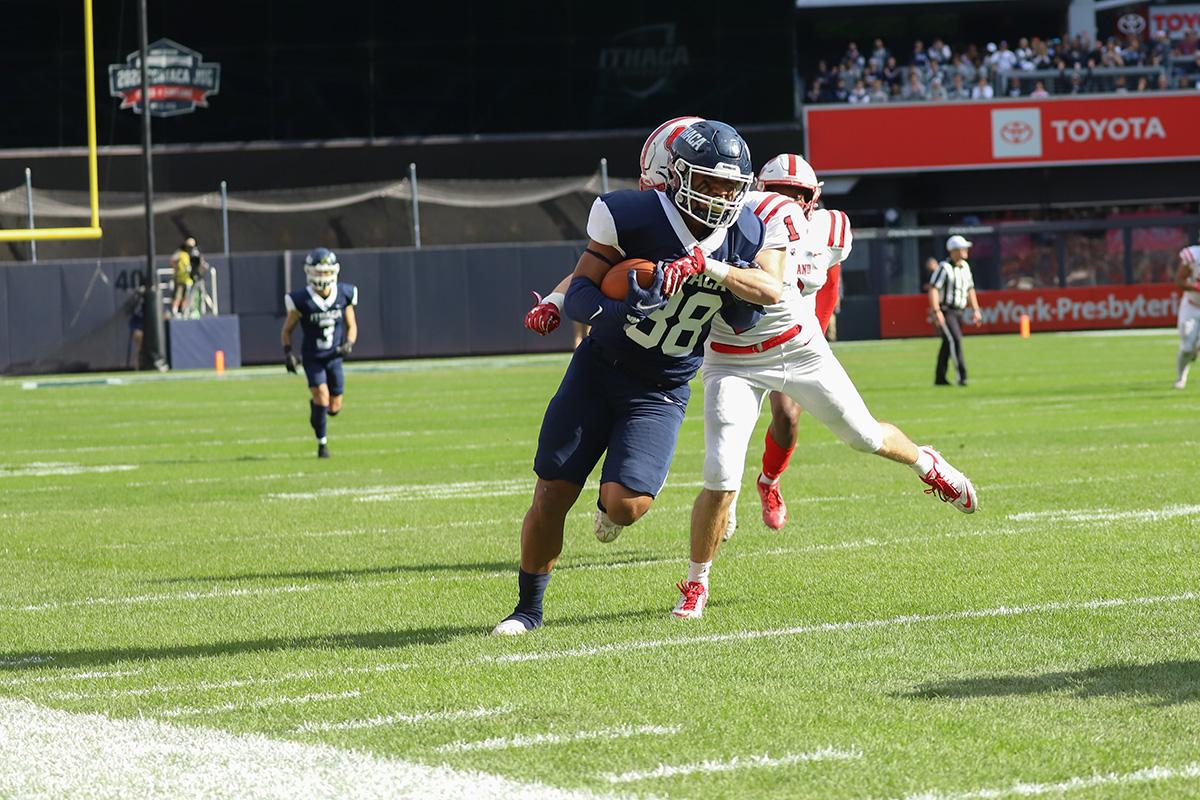 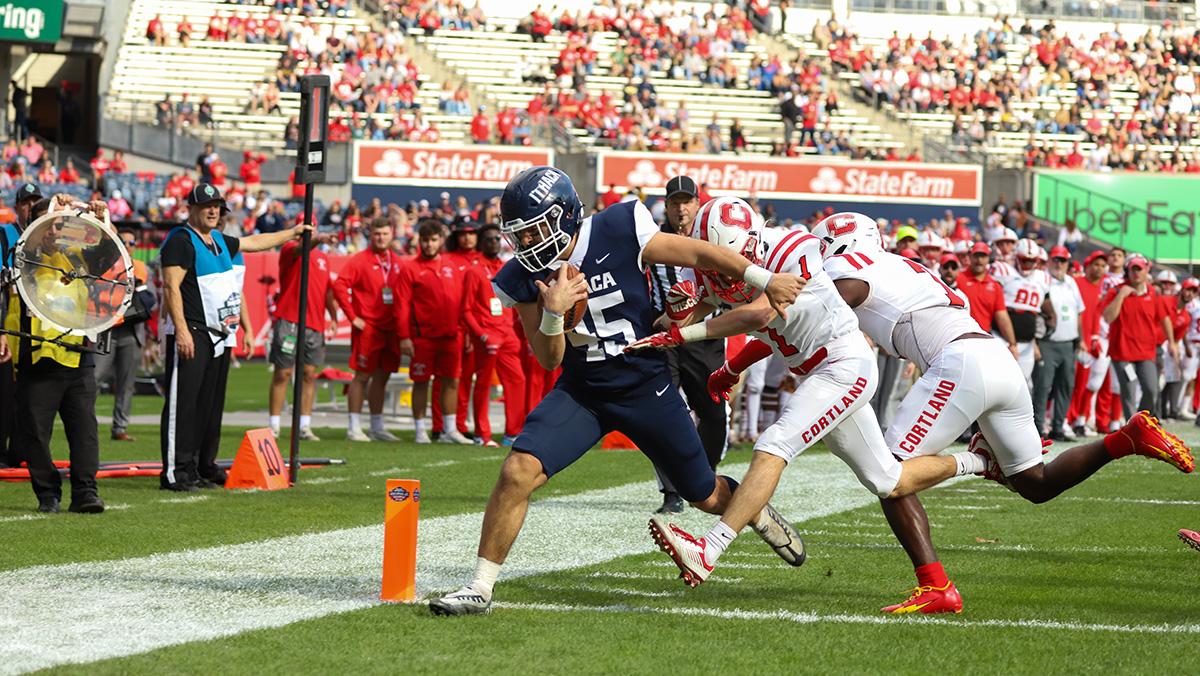 From left, junior running back Jake Williams rushes for a 10-yard touchdown reception in the first quarter while being tackled by sophomore defensive back Ty Kolar and junior defensive back Mark Noel. NOLAN SAUNDERS/THE ITHACAN

Boyes said postgame that he took responsibility for the two turnovers, a fumble and an interception, as well as another interception that happened in the fourth quarter.

“[The Bombers] were matching our routes pretty well,” Boyes said. “And honestly, I just misfired on a couple of throws. Didn’t take advantage of a bunch of good looks.”

The Bombers increased their lead early in the third quarter with a field goal to make it 20–7, but the Red Dragons began to claw back in the frame and entered the fourth quarter down just 20–17. Curt Fitzpatrick, head coach of the Red Dragons, said that settling for a field goal at the start of the fourth quarter instead of scoring a touchdown, which would have given his team the lead, was a key factor in the final outcome.

“In the third quarter, in a different game, if we’re able to punch it in in the red zone and go ahead by a point, I think you would’ve seen the left field crowd a lot louder,” Fitzpatrick said. “Things could’ve changed right there and [we] just didn’t get it done.”

The Bombers answered just a few minutes later, advancing their lead to 27–17. Wingfield let the ball fly by throwing a 40-yard touchdown pass to senior wide receiver Julien Deumaga, who leaped over a defender to make the catch before running into the left corner of the end zone.

Deumaga’s catch landed him a spot on ESPN’s Top 10 Plays the next morning. Michael Toerper, head coach of the Bombers, said he was impressed not only by the catch, but that Deumaga was ready for the play given his tumultuous season.

“I just want to give Julien [Deumaga] credit there,” Toerper said. “He’s a guy that, you know, started off really hot in the year, the ball found him a lot and he made a lot of plays. And toward the end of the season, the ball didn’t find him as much. … Just really proud of him.”

The South Hill squad did not let up as the quarter progressed, making it a 34–17 ballgame on a 43-yard rushing touchdown by Williams.

At the postgame press conference, Justin Lutes, associate director of athletic communications at the college, was asked whether or not there were plans to go to another big venue for the game anytime soon. While he joked that he would like to go to Citi Field where the New York Mets play, since it is the last big stadium in the area that the game has not been at, he did not say if there was any official plan to look into that or any other stadium.

Sophomore Sena Namkung, who said Deumaga’s catch sent her section of the stadium into a frenzy, said she thinks Yankee Stadium was the perfect place to host the game, both because of the way seating worked and because she thinks Butterfield Stadium is too small to host it.

The Bombers will begin postseason play at noon Nov. 19, as the team will host the University of Massachusetts Dartmouth in the first round of the NCAA Championship. Even though the team is coming off the heels of a game with more than 40,000 fans, Toerper said he does not care how many people show up for the playoffs.

“A big part of what we talk about is presence in the moment and understanding it for what it is,” Toerper said. “If there’s 1,000 people at Butterfield Stadium, great. If there’s 5,000, great.”

After spending three seasons with the Bombers as the defensive coordinator from 2017–19, Toerper made his return to South Hill having spent two seasons as the safeties coach at the College of the Holy Cross. Toerper said the decision to leave the college in 2019 was hard because of the bonds he had made with the team.

“It’s really hard to put into words [because] I’m just really proud of these guys,” Toerper said. “[The seniors] are guys who I knew when they were 17. I’ve been to every one of these guys’ high schools and recruited them. And to see where they’re at right now and see how they brought this team together, if I talk about it too much I’ll get emotional.”

With the season on the line in every game now, DeSimpliciis said he and the team are ready for whatever comes next.

“We worked really hard for this,” DeSimpliciis said. “It’s been four or five years in the making … I think we got something special, and I think we just gotta keep it rolling.”

Victory in the Bronx: Bombers take back the jug with win over Cortland