Charity basketball tournament is nothing but net 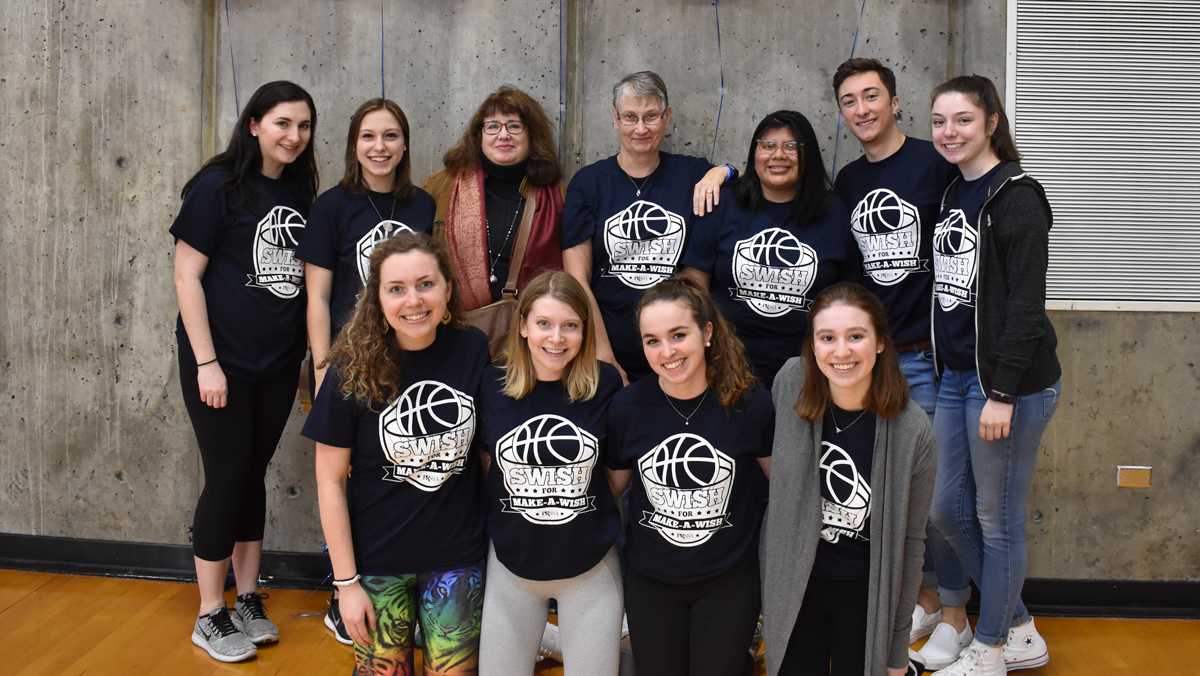 COURTESY OF PRSSA
Members of the Ithaca College Chapter of PRSSA stand with Make-A-Wish receipient AnaMaria Ahmed and her mother, Darlene Arnold who were in attendance at the basketball tournament.
By Jack Murray — Staff Writer
Published: April 25, 2018

Members of the Ithaca College community came together to compete in the 17th annual Swish for Make-A-Wish basketball tournament April 21 in the Fitness Center.

The tournament is held every year to benefit the Make-A-Wish Foundation, an organization based on providing hope and making dreams come true for children with life-threatening illnesses. The entry cost for the tournament was $10 per participant, and there were two possible divisions for entry: the pro division and the semipro division. There were three participating in the pro division and four participating teams in the semipro division. Teams were required to have a minimum of five players for contention.

The event is hosted by the Ithaca College Chapter of the Public Relations Student Society of America and the raised money goes to one child in need. This year’s recipient was an 18-year-old girl named AnaMaria Ahmed, whose mother spoke at the event for her. Her mother, Darlene Arnold, explained how important it was for her that her daughter could have her wish come true. When Anna was 17 years old, the family fulfilled her wish by going on a trip to Paris.

“Every year, we reach out to the Make-A-Wish foundation and they give us the name of a family,” Stephenson said. “This year, we had Anna Maria and her mom, who spoke at halftime. It is so special because it really brings to us why we are really here and why we are raising money for this wonderful organization.”

“The tournament was a lot of fun,” Powers said. “I thought it would be a lot easier than it was, and I cannot wait to participate again next year.”

The pro division format had each team play one another twice, and the top two teams played in a winner-take-all final. The Frenemies took the title by posting a 4–1 record. The Frenemies, which consisted of seven ’09 graduates of the college, have been regulars at the tournament for the past 13 years. Team captain Steven Galko ‘09 said he was pleased with this year’s installment of the tournament.

“The tournament is for an awesome cause, which is the reason we have continued to come since we graduated,” Galco said.

Junior James Tupper refereed the event, and while the level of play was less than that of the intramural games he usually officiates, he said the charity feel made the experience different.

“It is great to see so many people come out for such a great cause and have some fun playing basketball,” Tupper said.

The speech from Anna Maria was very moving for The Frenemies, and they said it reminded them of how many opportunities the foundation provides to those in need. Jacinto Maratea ’09 said he was especially moved by the speech.

“The speech was excellent,” Maratea said. “It had me tearing up If they didn’t have the recipients come to the tournament, it would not be as successful as it is.”

Stephenson said that they raised $1,200 from participation fees alone and made around $1,500 from donations, but the club is still accepting more donations until the end of May.

Galco and Maratea both said The Frenemies have every intention of returning for more.

“We will definitely be back next year and are looking forward to defending our title,” Maratea said.