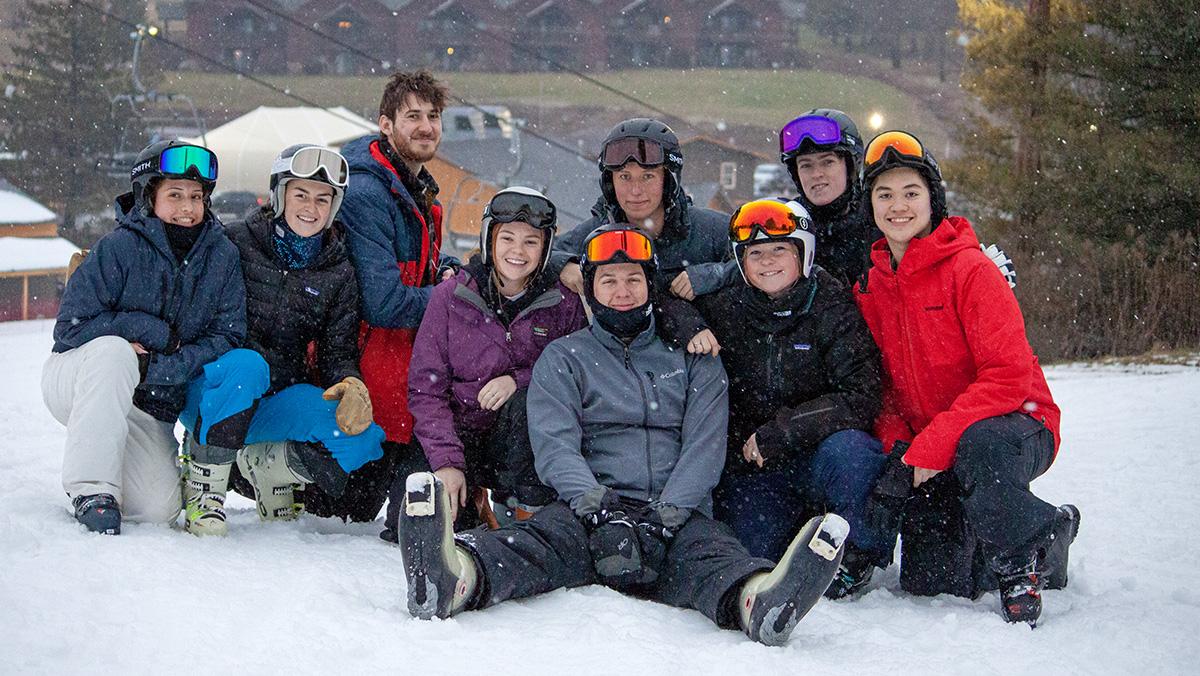 On a rainy day in the middle of January, members of the Ithaca College Ski Racing Club can be spotted speeding down Greek Peak Mountain Resort in nearby Cortland.

The conditions may not be nice — around 35 degrees, rainy and little to no snow coverage on most of the mountain — but it is “ski week” for the club, the time when all the members get back on the slopes to prepare for their season.

Like most club sports, the ski team has a wide range of skill levels among its members. Some, like senior club president Carley Randall, have grown up racing. Others, like senior Lilly Ries, grew up skiing, but never tried their hand at racing until arriving at the college.

“I wanted to join a ski team here at Ithaca, so I did,” Ries said. “[Learning to race] was very fun. It was kind of scary, but still really cool. And now I can say I’ve raced for four years.”

Randall said she knows that most people do not have her experience, but she hopes the club can draw in people in the campus community who just want an excuse to go out skiing on weekends in the spring semester. The team can have as many racers ski as it wants to, but only five men and five women can have their times count toward the team’s score.

“The thing is, we’re a club team,” Randall said. “A lot of our racers have a variety of experience … and that’s totally fine. We don’t care! Everybody just wants to ski, and learning to race is super fun. It makes you a better skier.”

Once the season gets going, the team trains two or three days a week, Mondays and Tuesdays, with a few Thursday practices thrown in. On the weekends, Ries said the team travels to the mountain where they compete against nearby clubs like Binghamton University, Alfred University and Colgate University.

Senior Isabella Greason also has experience racing, and she said she knew she wanted to be on the ski team at the college. She said part of what she loves about the team is the variety of skill levels and how laid back everyone on the team is about the sport.

“[We have] good-quality people, all genuine, no cockiness,” Greason said. “We’re all really close. We do a lot of team bonding. Like last night, we did a team talent show.”

Ries said she knows she will not be able to compete against the more experienced skiers, some of whom have been racing since before high school, simply because she has only been doing the sport for four years. But she added there are other reasons why it can be hard to get into the sport later in life.

“Money-wise, racing is super expensive,” Ries said. “I don’t have all the shin guards, or the pole guards to smack the poles [on the way down].”

The team competes in two disciplines: slalom and giant slalom. Both involve weaving back and forth between gates as the skiers speed down the mountain, with the fastest time after two runs winning.

In order to have the straightest line down the course, skiers will often try to cut as close as possible to the gates, knocking them out of the way with their ski poles or shins as they turn past it, making protective gear a necessity.

In addition, skiers need to wear speed suits, which the college provides. The suits are thin fabric, typically marked with the team colors and logos, that make the skiers as aerodynamic as possible. Randall said gear can be an issue — the team only receives the suits from the college — but she and the other members with experience are more than happy to share their equipment with everyone on the team.

“My siblings all race as well, so I will, like, bring their gear and share it [with] whoever needs it,” Randall said. “Some kid’s skis broke, and my dad was coming the next day, so I was like, ‘oh, can you bring [extra] skis?’”

As far as why the team is skiing in the less-than-ideal conditions in mid-January, it is because their season is about to begin and many members have yet to practice. So, Randall said, the team comes back to campus a week early to get out on the slopes and be ready for its first competition Jan. 28.

The team spends ski week together, meeting the new members of the club and getting close. Randall said the team does activities as a group and has team dinners. Along with bonding and warming up for the season, Randall said ski week provides her a chance to see which skiers are the best and should be competing for points at races.

“When we have the ski week, we’ll have people training and I’ll be able to watch them,” Randall said. “We know who’s fastest after the first race.”

First-year student Jack Butler, who, like Ries, is an experienced skier who has not raced before, said he knew there was a club that went skiing, but did not know they raced until he got to the college. Although he is confident on his skis, Butler said his racing knowledge is pretty low.

“I know you go in between the poles … and then you go around the flags,” Butler said. “I’ve watched the Olympics, that’s the only thing I’ve seen. And it’s like, yeah, seems fun if I had the chance. And now I have a chance!”

The team did get the chance to practice on the course at Greek Peak, which operates as its home mountain, but Randall said everyone wanted to get back on their skis, so getting out for a day of free skiing was a good way to get started.

First-year student Bodhi Ames is also just learning to race, and he said he has set a solid goal for himself for this season.

“I’m just hoping to make it to the bottom,” Ames said, laughing. “I want to figure out slalom … In giant slalom, you carry more speed, it’s more fun.”

Following the six-week season, Randall said the team usually qualifies for Regionals, which includes teams from across New York State. If it performs well enough at Regionals, the team can qualify for Nationals — but Randall and Ries said it is not quite there yet, partially because of the pandemic.

“COVID[-19] kind of kicked our butts with attendance,” Ries said. “I feel like a lot of people at the school probably do ski.”

No matter how the season goes for the team, Ries said the fun of the team is being able to ski, not necessarily winning — although learning to improve is always a good time.

“I know I’m not going to be Lindsey Vonn,” Ries said. “But it would be nicer to go down faster!”