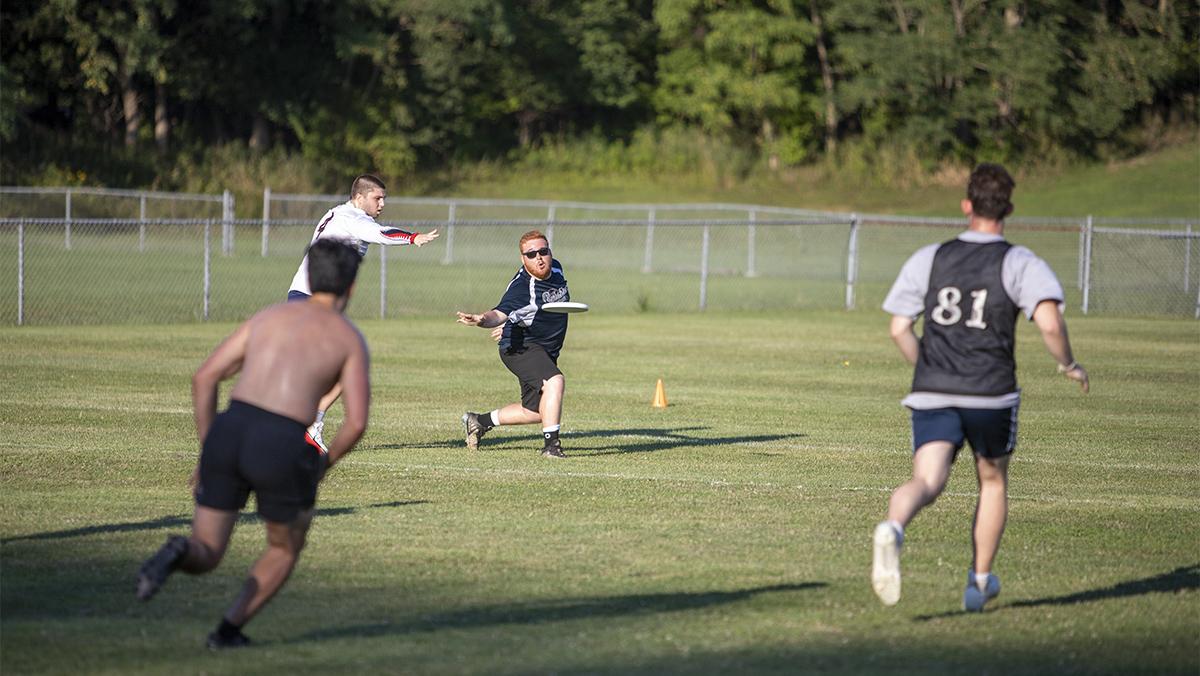 Thomas Kerrigan/The Ithacan
Junior Noah Kamens throws by a defender to his teammate during practice for Nawshus Ultimate. In May, the team advanced to the USA Ultimate Nationals.
By Tobiah Zboray — Staff Writer
Published: August 30, 2022

After a strong showing during the spring semester, the Ithaca College men’s club ultimate frisbee team is looking to pick up where it left off this fall.

Last spring, the team finished 18th overall in the country within the USA Ultimate rankings for club frisbee and included a trip to the regional finals in Fort Ann, New York. Their victory in this event punched the team’s ticket to the national championship back in May, which took place in Milwaukee, Wisconsin. Senior Noah Sandler said the team’s run to the regional finals has given them confidence coming into this year.

“We’ve been to regionals and we’ve been to sectionals, but we haven’t been to Nationals,” Sandler said. “But all together we feel like we’re in a pretty good spot. A few of our core people graduated, but we’re looking pretty promising for next year and going forward.”

For the team, its success has been aided in the past by the connection between teammates off the field, helping the team be closer on the field during competition. Junior Noah Kamens said that throughout the year, the team does its best to stay in close contact with everyone, including while on campus and staying in contact while over breaks.

“There’s not a lot of stuff we do in the offseason because over the summer we’re all in different places,” Kamens said. “However, we’re all texting each other over the summer. When we’re on campus, we’ll get lunches together, we’ll hang out, we’ll do informal things. It’s definitely hard at first as you’re, like, meeting new people, … but as we get on campus and get acclimated with everybody, then we start hanging out more. … And the more we do that, the more it helps out our performance on the field.”

Tournaments also provide an opportunity for the team to become closer while playing a sport they all enjoy. When the team travels, Kamens said that they pile into four to five cars and drive to the tournament site on Friday, stay in hotels with four in each room and have a team dinner on Saturday night.

“My favorite part is that we have time to be on the field playing, but also time to relax and get to know each other,” Kamens said. “Tournaments are also a lot of fun because we almost always go to the same tournaments as our women’s team, so when we’re not playing we can cheer them on and vice versa.”

Despite the team not being able to stay together through the summer, senior Elliot Mintz said a group of alumni organized a tournament during summer break, which he said helped some of the members of the team who stayed in Ithaca over the summer to better their skills and to connect with each other.

“So, coming into this year, we are kind of low on numbers,” Mintz said. “We had a lot of people graduate, so we’re going to be pretty heavy on recruiting this season and teaching new people this sport, and then hopefully getting up to the level where we can compete to go to the national championships again.”

With the team looking to add more students, Kamens said one thing the team wants to see from new team members is them wanting to play and to have fun doing so.

“We just want to see genuine interest,” Kamens said. “We’ve actually been really lucky already. We’ve had a couple people reach out to us about joining. Recently, a group of us came out and we were just having a catch on the quad for a while, and about 12 freshmen joined in. So we’re really just getting the name out. You don’t need any prior experience, you don’t need to be good at the sport.”

As the fall semester season begins, the team wants to use this time to prepare for the competition season in the spring. Mintz said the team splits the club season into two segments, with both the fall and spring semester having their own goals to achieve.

“So, this is the season where our goals are just to recruit everyone, teach them the sport, have a lot of fun and get everyone comfortable,” Mintz said. “Then when we get to the spring, that’s when we really get serious and we start having our more serious practices where we really want people showing up. We start working on throwing, working on nailing all that stuff down so that we can really focus on sectionals which is our first major tournament.”

But while the fall season is meant for the team to get everything in order before the spring, Sandler said that the team plans on hosting a co-ed tournament Sept. 17 at the college against other ultimate frisbee teams as a way to get ready for the season. Kamens said that getting to host the tournament this fall makes it easier for the team to connect while also learning more about the new team.

“Especially when we host [the tournament], it’s really convenient,” Kamens said. “We can just relax and play frisbee. So I’m really excited for that. I can’t wait to get back to being with the team.”

As the team gets ready for the new season, Sandler said that the one focus of the team at this point is to recruit as many people as possible.

“Anyone who wants to join can join,” Sandler said. “The only thing we require is just try the hardest you can, and we’re completely happy and satisfied with that.”