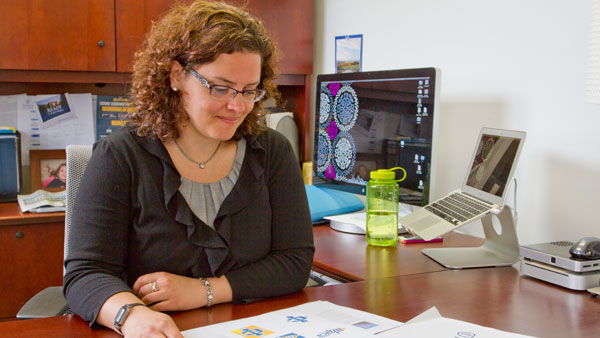 Six months into the Bomber athletics rebranding process, the Ithaca College Office of Intercollegiate Athletics is closer to selecting a new logo, but it is not in the place it expected to be at this time. Susan Bassett, director of intercollegiate athletics and recreational sports; Joe Gladziszewski, associate director of athletic communications; and Rachel Reuben, associate vice president of marketing communications, are leading this project and are laying the initial foundation to create a consistent athletic identity for the college.

The three have hired an undisclosed firm and tested logos on focus groups of Bomber athletes and coaches, but they have not yet finished the focus group process for the new image of athletics.

Staff Writer Haley Costello sat down with Reuben to discuss what stage of the timeline the identification process has reached, what they plan to accomplish next and what they have done so far with the website.

Haley Costello: Where is the college in the process for finding a new logo?

Rachel Reuben: It took several months to go through a large number of logos, about 50, to find three that we were going to test, and we got some really good feedback through the focus groups. Right now, we are refining them, and then we are going to be focus-group testing them again.

HC: Why is the college behind on the original timeline set at the inception of the project?

RR: In an ideal situation, we would be able to launch a new identity this fall, but we knew when we started this process last November, that it was a really aggressive timeline. The most important thing is that we get an identity that everybody feels good about. It would be ideal if we had a new website to launch at the start of an academic year, but we are less concerned about the timing right now.

HC:  What has been the overall opinion of the logo so far?

RR: I sat in on four of the focus groups, and there was a wide range of feedback. I didn’t sense any hesitation or concern, but there are some strong feelings about what some individuals feel may not look good on a hat or a helmet or a jersey. We tried to get them to think about it as a logo we would use on the website, and we would build from there.

HC: What do you expect to do after the next set of focus groups gets another look at some  more redesigned logos?

RR: If we have three [focus groups] that we feel really strongly about, we could either do another evolution, or we could pool a smaller group together and just make a decision.

HC: Though the new logo has not been selected yet, where do we stand on a new website?

RR: There is lots of work behind the scenes on the website. [The website coordinators] have been looking at the structure and the content that’s going to be on the [new] site. They did a survey a few weeks ago and got a very good response rate from current student-athletes and prospective student-athletes on what they expect in an athletic website. But there has just been no design work to it yet because we are waiting for that identity piece.

HC: Are the three logos you have right now viable options for everything you have to do?

RR: They are all flexible systems, so we are testing various aspects of things like where the word “Ithaca” could be used by itself or where it could be used with the word “college” underneath it or “Bombers” underneath it or the sport’s name, like swimming and diving. Then we have the ligature where we have the interlocking “IC” right now, and we have been testing updated versions because that is something baseball and softball likes on their hats.

HC: Has the logo team locked into place any decisions about the designs?

RR: Susan [Bassett] has definitely decided that a jersey won’t say “Bombers” across  the front. She wants the college’s name out there because when our athletes are photographed with just the name Bombers, most people are like, “Well, what college or high school is that?”

HC: What has been the biggest struggle in this  logo redesign process?

RR: We have 27 teams, and you can put five together and you can’t even tell they are from the same college. We have 27 different uniforms we have to figure out how to apply the new logo system to. That is an enormous project in and of itself, and we have the signage and facilities all over this campus that will need to be updated at some point in the process.