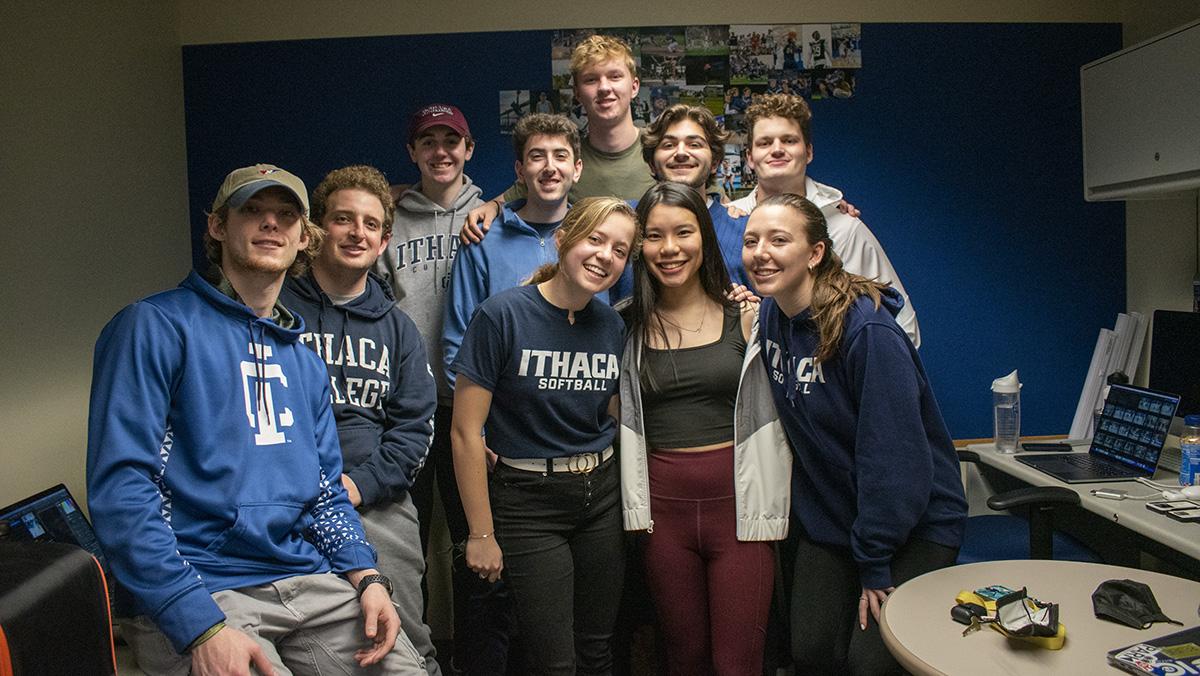 In a small room in Roy H. Park Hall, currently marked by a piece of notebook paper written on in Sharpie, sits the office of the Creative Media Team, Ithaca College’s newest co-curricular.

The temporary sign does a good job of showing just how new the team is. It was recognized as a co-curricular at the beginning of the semester and moved into the office Jan. 27. While students had been employed by the Athletic Communications Office to create content for the sports teams previously, junior Peter Raider, manager of the Creative Media Team, said the official creation of the team gives it a better opportunity to recruit new members and communicate with each other.

“We were a team that created content for team [social media] accounts and the [Ithaca College athletics social media] account to help build their brands,” Raider said. “What’s changed now that we’re in Park is that we have an office, we’re getting gear and we have a new system of trainees.”

Raider described the team as a three-tiered system. The top tier consists of Raider and three assistant managers, followed by the students with a paid position on teams. The third tier is the unpaid trainees. He said the goal is to have students move up as they get older.

Raider said he is grateful to have a space for the team which does videography, photography, runs social media and creates graphics for athletic teams at the college. It previously worked out of wherever it could find space. Now that it has a dedicated space, it makes it easier for the team members to communicate with each other.

Senior Clay Medling said the office also gives the team more of an opportunity to connect with athletes.

“[Having the office] does, like, build up that relationship of the filmmaker or photographer with the players,” Medling said. “[Now], when the time comes for their season, it’s like we’re closer to the team, which makes for better content.”

Raider also said the team now has access to camera gear, which means people will not need to use their own devices. In addition to opening up more options for students without access to high-quality cameras, he said it will help the image quality look more similar among sports.

The equipment was provided to the team by an outside donation, according to Jack Powers, interim dean of the Roy H. Park School of Communications. The plan was originally to have the team be able to book equipment through the Park Portable Equipment Center (PPECS), but the college was able to obtain $15,000 from the Callahan Fund for Student Success to purchase gear specifically for the team. Now, Powers said, the team does not have to deal with the limited supply of equipment in PPECS that also rents to students in production classes.

“Anyone who works in any of our [co-curriculars] that require access to PPECS knows that equipment can be hard to come by … [now] they’ll always have access,” Powers said.

Justin Lutes, associate director of Athletics Communications at the college and adviser to the Creative Media Team, said he thinks this will help the athletes at the college gain more exposure in addition to being a great opportunity for students to create content.

“I believe the students who are heavily involved have a great vision and will continue to build creative media into a recognizable group,” Lutes said via email. “Not just at Ithaca [College], but across intercollegiate athletics, prospective students coming to Park and prospective student-athletes who want to attend IC and have that ‘Division I’ feel to exposure on social media.”

Junior Mel Kardos said she is excited for the opportunity to bring in new creators to the team. The team had its first-ever recruitment night Feb. 8, which doubled the membership. There are around 15 students on the payroll, Lutes said, but recruitment night brought in over 25 new members who are interested in training.

“[When we were just with athletics], you already had to know what you were doing to some extent,” Kardos said. “Whereas now we have a lot of people that are interested, but don’t have the experience.”

Freshman Spencer Cross is one of the trainees for the new team. Cross joined in Fall 2021 before it was a co-curricular, but he said it was still a pretty easy process.

“I pretty much jumped right into it,” Cross said. “I don’t really have a definitive role, I’m just kind of there shadowing guys, but I’m still sending out my photos to the teams and they’re putting my photos on socials.”

Raider said he believes the co-curricular provides an option for a different type of sports photography than what was previously available for students. While Raider said he used to do photojournalism, he thinks the process behind creative media is very different.

“[Photojournalists’] purpose is to tell stories,” Raider said. “For [the Creative Media Team], it’s really providing photos to athletes to help them build their own brands [or] to send to families. And also to serve purposes on the team accounts.”