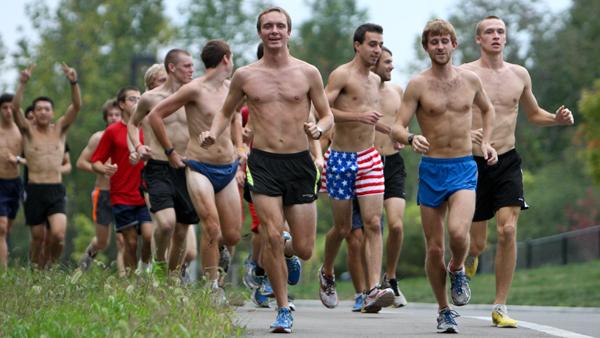 To produce the best possible times on race day, rather than personal records during the week, the men’s cross country team has implemented a new training style that follows the motto, “The race is on Saturday.”

This season, the men’s cross country coaches have decided to apply a new preparation method, which entails less volume and less intensity for team practices.

“One of the things we did last year was we over-trained, and when we reviewed at the end of the season we found we didn’t perform at as high of a level on Saturday as we thought we might perform based on practices,” Nichols said. “So we decided to back off our intensity of weekly training and put a limit on the amount of volume on stress days to improve performance.”

Nichols began as an assistant coach for the cross country team under former Head Coach Bill Ware when he came to the college in 1986. At the time, Nichols was also head coach of the men and women’s track teams.

Because he needed to take care of the entire track team, Nichols did not have as much time to focus on the distance runners. Nichols said this caused him to sacrifice long runs and important training methods that would keep the team in shape for both track and cross country.

Six years ago, Nichols added former Bombers runner Eric Sambolec ’99 to the staff as the assistant coach to advance the training for the distance team. Sambolec now works as the distance coach on the track team as well, which allows him to use the same methods as they use during the cross country season to keep the team at the same level.

Sambolec said the biggest decrease in volume is seen on the team’s interval training days. The average workout last year included four and a half miles of training at a five-minute pace, but now the distance has diminished to about three miles at a five-minute and 15- second pace.

Sambolec also said in addition to the cutback of distance and expected times, the team has also added lifting to the mix of exercises to avoid injury and to fit their new strategy.

“Now we are reining them in with the running, and we are also adding more weight lifting to keep the team healthy,” Sambolec said. “The weight lifting also tires them out even more, so it helps to slow them down while running and avoids overworking.”

Senior captain David Geary said the team is seeing results it has not seen in the past few years because of the changes.

“It’s early, but so far we are seeing some really great results in both the weight training and running because we have more overall strength,” Geary said. “It gives us more resistance to injury, and we recover faster.”

Nichols said the decrease in volume is an important decision for all of the athletes, whether they are seniors or freshmen. This type of training decreases the amount of stress the athletes put on their bodies each day at practice, whether it is a long run or a difficult workout day.

To contribute to the amount of rest they will have for the postseason, the team has also altered its schedule to make sure they do not waste their energy too early. The team recently decided to scratch SUNY-Cortland’s Jack Daniels Invitational to conserve their energy for later in the season. The team will compete at Lehigh University’s Paul Short Run this weekend in Bethlehem, Pa.

Geary said he is optimistic about the potential outcome of this years postseason, with a squad that should have fresh legs for the championship runs.

“The progression that we are doing this year, as opposed to years past, gives us a better chance to feel good at the end of the year, which is really what it’s all about,” Geary said.