When competing, the Ithaca College cross-country teams will typically race against other schools in a battle to see which team will come in first place.

However, the Bombers found themselves racing against alumni at the Jannette Bonrouhi-Zakaim Memorial Alumni Run on Sept. 1. Erin Dinan, head coach for the women’s cross-country team, said that even though it is an informal race, having the alumni there makes it more competitive.

“It’s awesome,” Dinan said. “The most recent class were amazing, and they’ll come back and beat the varsity team. They really look forward to it.” 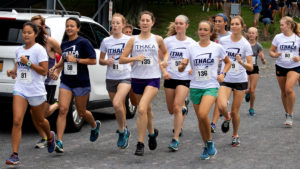 Alumni from the women’s cross-country teams participated in the memorial run.

Bonrouhi-Zakaim was a graduate of the college in 1990 but died unexpectedly in 2000. She is the only four-time cross-country All-American in program history. During her time on South Hill, she led the team to four–straight top-five showings at the NCAA Championships. In 1988, she finished in fifth place at the NCAA Championships, which is still the best individual finish in women’s team history.

The weekend started out with an alumni dinner the night before the race. After the race, Jim Nichols, head coach for the men’s cross-country team, hosted a picnic at his house that included a bounce house for the children of the alumni.

The day started out with a race for the alumni’s children, which was far less intensive than the memorial run — the kids took a competitive loop around a field. Former Bomb 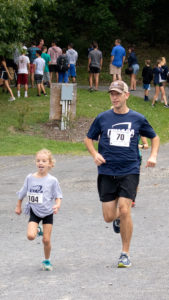 Dave Malay ’02 runs with his six-year-old daughter, Claire Malay, at the alumni run.

Dan Malay ’02 said running in the event gives him a great opportunity to see how the program has changed since he graduated.

“My wife and I met here, and we both ran cross-country and track at Ithaca,” Malay said. “It’s a great event to come back to every year and to see how young allthe current athletes look and see some alum and talk to Coach. It’s always a great time to spend the day in Ithaca.”

When the actual race started, the course took alumni and both current teams around Kostrinsky Field and through the Natural Lands. In total, 100 competed in the run, and 37 were alumni. Junior Forest Stewart won the race with a time of 15:58. The first alum to finish the race was Stephen Gomez ’16 with a time of 16:05.54 to finish fourth. The first woman to finish was graduate student Denise Ibarra with a time of 19:53.74. The first member of the women’s cross-country team to cross the finish line was junior Maria Matkoski, who ran the race in 20:10.99.

Dinan said that each alum who comes back to the college can bring a different experience to the race.

“Every team is unique and different,” Dinan said. “The alumni want the teams to have the experience they did, so it is always a good time.”

Sophomore Sam Shapiro said having the alumni come back for the race makes him feel like a strong part of the men’s cross-country team’s culture.

“It’s great,” Shapiro said. “The fact that Coach impacted so many people’s lives since he’s been coaching for 30 plus years, it’s great to be part of that tradition.” 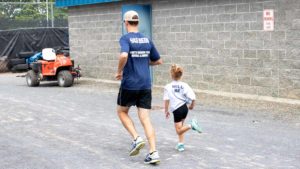 For the rest of the season, the Blue and Gold will be competing against stiff competition throughout the Liberty League Conference. This is the only meet of the year where the teams do not face other schools. The next meet for the South Hill squad is Sept. 8, when the team will race in the Hamilton College Short Course in Clinton, New York.

“Like Coach says, it’s a good pop quiz to see where is everyone is at heading into the season,” Shapiro said.