Diver Morrison back on the board after suffering concussion 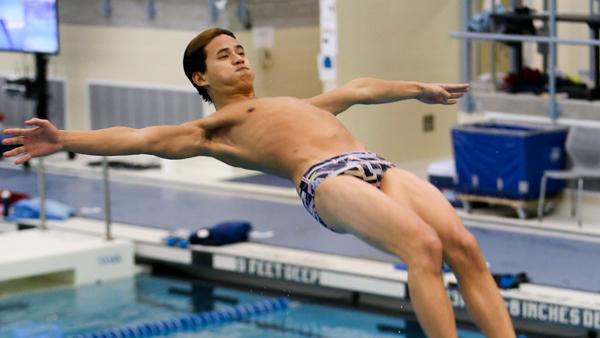 Durst Breneiser/The Ithacan
Sophomore diver Matt Morrison practices a 1-meter dive during a practice Nov. 6. in the Athletics and Events Center Pool. Morrison has emerged as the team’s top diver after coming back from an early-season concussion.
By Doug Geller — Staff Writer
Published: December 4, 2012

Sophomore diver Matt Morrison takes a deep breath as he climbs up the ladder to the board. He takes four steps and enthusiastically jumps up, comes down onto the springboard and then off into a flip and completes the dive that eluded him three weeks earlier.

This season did not begin exactly how Morrison thought it would. During a practice dive in the preseason he suffered a concussion when he hit his head on the water incorrectly — an incident diving coach Mike Wantuck called a “fluke.” The concussion kept Morrison out for two-and-a-half weeks. He said the accident is still on his mind when he dives.“That was always on the back of my mind, but diving is a big fear-relating sport, so when I did the dive I got the concussion from, I just got it over with and kept going,” Morrison said.Morrison was told he had to sit and wait for two weeks, which he said was the hardest part. Morrison watched the first meet against SUNY-Brockport on Oct. 13 and cheered his teammates on to victory.

Morrison bounced back quickly, winning the 1-meter dive in his first meet back against Rensselaer Polytechnic Institute on Oct. 27 and then won both the 3-meter dive and 1-meter dive in the team’s next three meets including against rival Hartwick College. He was also named Empire 8 Diver of the Week during the week of Nov. 20.

Morrison has found success even when diving against his teammate, a two-time All-American and Empire 8 Diver of the Year last year, senior captain Martin Brown, who calls Morrison his toughest opponent this year.

“At states and nationals, if we make it, he’s gonna be my biggest competition,” Brown said. “I hope to give him a run for his money, but I know he’s definitely gonna kick some ass.”

Brown also said Morrison is one of the most fearless divers on the team.

“He’s always throwing pretty crazy dives. Sometimes the rest of us are doing a new dive and act all scared about it, but he just gets up there and throws them and has a good time with it,” Brown said. “He does a really good job at setting a good example for the team.”

Though Morrison was All-State his junior and senior year in high school, he said he never expected this type of success so early in college.

“I didn’t have any intention of making nationals [last year]; I didn’t even know I made it until my last dive last year. I didn’t even think I would make states,” Morrison said.

Morrison added that not having the expectation of going to the national competition was a blessing in disguise, as he was able to focus solely on his dives. This year is different because he wants to go back to nationals with the rest of the divers.

Wantuck said he’s been impressed by how quickly Morrison has been able to bounce back from his early-season adversity.

“That’s the kind of enthusiasm you find in a champion, someone who wants to get into the thick of it even before he is fully cleared,” Wantuck said.