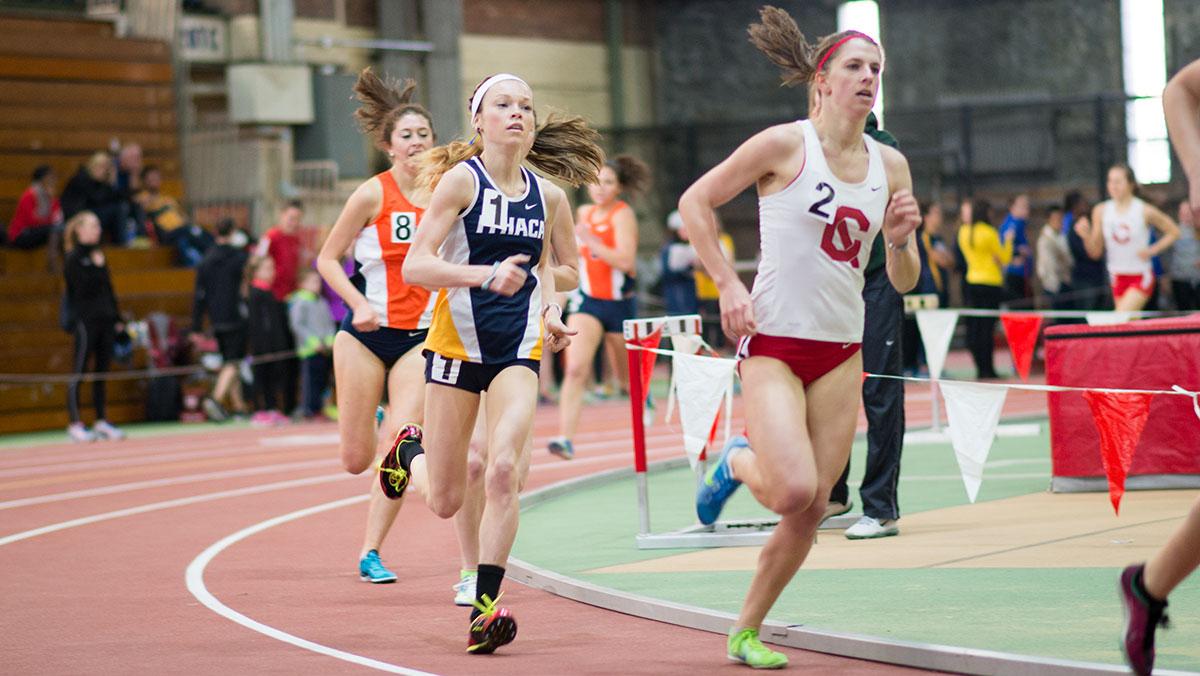 During their seasons, the teams compete in Division I meets — a longtime tradition of at least 10 years — going up against powerhouse schools such as Cornell University, Syracuse University and United States Military Academy, West Point. The three Division I meets — all of which are hosted by Cornell — that the teams participate in make up one-third of the indoor track season.

On the surface, participating in these events may seem unfair and pointless as a Division III school due to competition levels, practice constraints and Division I schools’ ability to offer athletic scholarships. However, many Bomber track and field athletes disagree — regardless of unfairness due to divisional differences — because the Division I meets offer better competition, facilities and preparation for future meets.

On Jan. 24, both teams competed in the Cornell Upstate Challenge at Cornell University. With Division I–caliber competition, the Bombers had a challenging day ahead of them, and by the end of the tournament, the teams made several individual accomplishments. Team scoring for the Blue and Gold, however, was not allowed in order for Division I regulations to be met. A Division I track meet cannot be considered “official” if a Division III team participates and counts its scores in the results — which poses the question for the college’s track teams: Are these meets worth it?

For many athletes, the idea of not being able to be formally recognized for their accomplishments may defeat the purpose of competing in these meets altogether, but freshman hurdler Noah Cohen said the Division I athletes prepare the Bombers for their Division III meets.

“We like it because of the high level of competition,” Cohen said. “It really pushes us to do our best. We know going into those meets that we will be facing high-caliber teams. Rather than getting discouraged, we just take it as training.”

“I think competing in Division I meets is very beneficial,” Hayes said. “It’s something that not all Division III schools have the opportunity to compete in — especially multiple times a season. We know we can’t score at Division I meets, however we never lose motivation. Our motivation is knowing we have great competition to push us.”

Surrounding the athletes with high-level opposition is something women’s track and field head coach Jennifer Potter said she is passionate about.

“If we’re not challenged in these meets, we’re not progressing toward the goal of being successful in the postseason,” Potter said. “If we win everything, where’s the challenge? It’s not about winning or losing for us. We want to utilize the competition to bring us to a higher level.”

In addition to the limitations on scoring, Potter said Division III schools also suffer a disadvantage regarding practice time. Due to NCAA regulations, Division I schools are able to spend more time practicing in comparison to Division III schools, where a stricter time constraint is placed on the number of official practices that can be held.

“We had a meet on the first weekend in December, and then we didn’t practice again for a month,” Potter said. “The Division I teams were probably practicing all along, except for one week at Christmas.”

Neither of these limitations, however, held the Bombers back from excelling in their individual events at the Cornell Upstate Challenge. For the men’s team, five athletes achieved personal bests. As for the women’s team, seven athletes had standout performances that qualified them for the Eastern College Athletic Conference meet despite the fact that no Bomber placed in the top-three finishers in any event.

Potter said these accomplishments were a product of the high competition at the meet.

“Having Cornell right in our backyard makes it super helpful,” Potter said. “Competing against these Division I schools makes the sport more interesting. It gets you going. It gets you riled up.”

As for the future, it is very likely that the college will continue to participate in these Division I meets for other reasons than just the fact that they challenge the athletes.

From a facility standpoint, there are only so many places to go indoors for the winter meets. Division I teams — primarily Cornell — host many of the indoor meets the Bombers compete in. As a result, Potter said ending these interdivisional competitions would create a scramble to find host teams. In addition, it would alter the way Division III schools qualify for nationals because it would change the standards from placing in the top 18 nationwide to competing head-to-head.

However, Potter said the main reason the Bombers continue to compete alongside Division I schools is for the competition that prepares them for more important meets.

​“If we’re not challenged, we will never get better — not physically, not emotionally,” Potter said. “It’s only intimidating if you let it be. Whether it’s in the classroom or on the court, having a challenge makes us better people in the long run.”