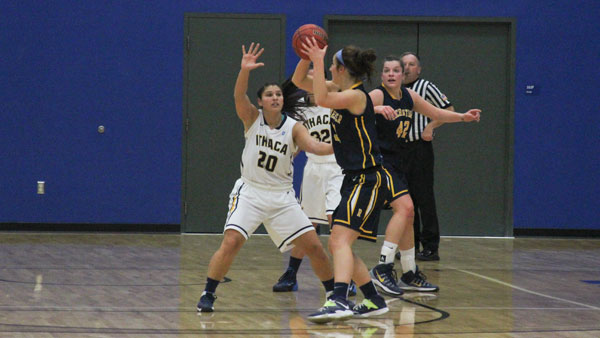 Senior forward Jenn Escobido became the 12th player in the women’s basketball team’s history to score 1,000 career points, which happened during the Bombers’ 82–65 against the visiting Stevens Institute of Technology on Jan. 24 in Ben Light Gymnasium.

The 5-foot-10 forward reached the milestone in the first half of the game. She had 24 points, eight rebounds and four steals, helping the squad’s record to 13–4.

Escobido said she was excited about the individual accomplishment, but she said she was happier to get the team victory.

“Points aren’t everything,” Escobido said. “I’m not one to always care about that, but I’m proud of it. I’m glad that my teammates are very happy for me. I couldn’t do it without them.”

“She contributes so much more than points,” he said. She’s absolutely our best defensive player, and she’s probably one of the smartest players I’ve ever coached in my career. She just does it all.”

The Blue and Gold got off to a slow start, as they trailed the Ducks 9–0 in the opening minutes of the game. The Bombers were also put at another disadvantage when starting senior guard Mary Kate Tierney was called for two early fouls, sidelining her until the second half. Tierney’s teammates picked up the slack though, as senior guard Kathryn Campbell scored 15 points with eight rebounds and five assists, while junior forward Geena Brady chipped in 15 points and nine rebounds.

Brady said the outcome of the game depended on every member of the team stepping up and producing.

“I think today was just a really good team win, and everybody contributed at different times,” she said.

After trailing early, the Bombers’ offense exploded and led the squad to a 45–23 lead at halftime. The Ducks came back, as senior forward Avis Benjamin and sophomore Miranda Ripken each scored 16 points.

The South Hill squad has now won five straight contests, and is 6–1 in Empire 8 conference games with eight games remaining in the regular season.

The Bombers will host Hartwick College for a rematch from Jan. 3 at 4 p.m. Jan. 25 in Ben Light Gymnasium.