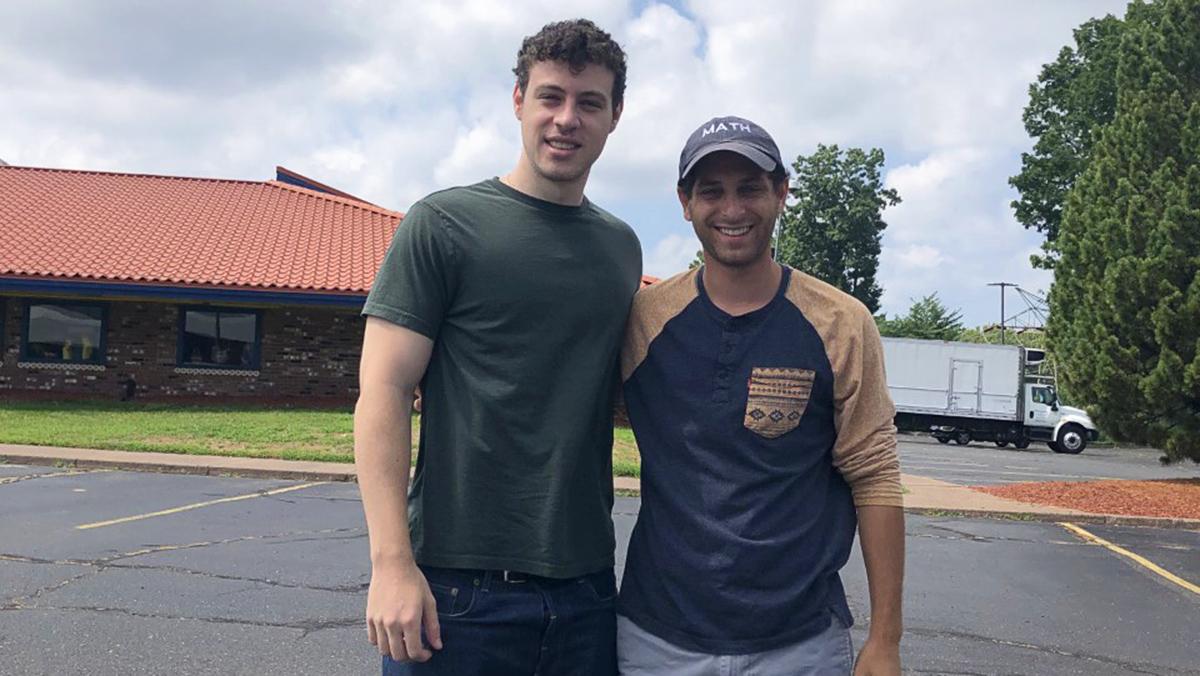 COURTESY OF SAM FACTOR
From left, Dylan Shane '19 and Sam Factor '19, the founders of WalterPicks, an AI-powered fantasy football tool. The pair made the algorithm in a machine learning class in 2019, but have since expanded it to a popular app and TikTok brand.
By Aidan Charde — Sports Editor
Published: August 31, 2022

When Ithaca College students Sam Factor ’19 and Dylan Shane ’19 created an AI-powered fantasy football tool for their machine learning class in Spring 2019, they thought it would be nothing more than a final project.

Until the 2019 NFL season rolled around, Factor, the CEO of WalterPicks, said he and Shane had no way of knowing if the algorithm, which they named “Walter,” would work. But once games began and the pair could see how well their algorithm’s projections mirrored the real-life performances of players, they realized they might be onto something big.

“We built [the algorithm] by backtesting it against past seasons that it hasn’t seen before,” Factor, a former math major at the college, said. “But it was in the fall after Dylan and I graduated where we actually got to see how it did live in real games. … So that was ultimately what got us excited enough, that first season, and how accurate it was, to turn it into more of a real business and a brand.”

Fantasy football is a game ever-growing in popularity among the American public. Reports estimate that over 40 million people in the United States and Canada play fantasy football every year and Statista estimates that fantasy sports were worth around $8.88 billion in 2021.

There are two popular ways of playing fantasy football. Users can join a league, usually through apps like ESPN Fantasy or NFL Fantasy Football, where they draft a lineup of players and compete weekly against the other members of the league, with one member winning the championship at the end of the season.

The other way is through daily fantasy sports (DFS), which is usually run through gambling companies like DraftKings or FanDuel. In DFS, users draft a lineup for one week only and compete against other users for a pool of money. In both versions, players earn points based on their in-game performances, and the users with the most total points are the winners.

The app is a tool to help users draft and set the best possible lineups for fantasy football. While users cannot play through the app, they can sync their accounts from other apps.

With many big corporations, like ESPN and DraftKings, offering player projections, it can be hard for smaller startups to break onto the scene. Not only has WalterPicks found an audience, but it has been 17% more accurate than ESPN and Yahoo, according to the app’s loading screen. Factor said he knew they had a good product, but he and Shane were surprised to see just how good it was.

“Seeing that [our algorithm] was more accurate than [ESPN and Yahoo] was definitely a big moment,” Factor said. “It’s sometimes tough to tell with sports, how accurate a model is, because sports have so much variance that there’s no model that’s insanely accurate. So the best way to see how accurate you are is to compare yourself to other people.”

Doug Turnbull, associate professor in the Department of Computer Science, was the professor for Factor and Shane’s machine learning class in Spring 2019. He said he has seen many students create impressive tools for the final in the class, but it is uncommon for them to turn it into a full company.

“A number of my students have gone off to work in data science jobs where they apply the skills [they learned in this project],” Turnbull said. “And we’ve had a number of people start web applications that they sort of work on as a side project after they graduate, but [WalterPicks] is, like, a full-time job with employees and stuff. It’s definitely a next-level kind of thing.”

Walter uses 20 million data points over 10 years of football to form its projections, according to the company’s website. Shane, who majored in computer science and now works on enhancing the software for the app, said finding the right data was the most important part of creating the tool.

“The secret is just our data set,” Shane said. “Even when we started, Sam was very meticulous about cleaning the data, making sure it was all good. We removed any egregious outliers and stuff like that, stuff that would throw off the projections a little bit.”

However, Shane said just having a good app with accurate predictions is not enough. With the volume of fantasy sports apps and tools available, Shane said they worked hard to build a social media presence to draw new users to WalterPicks.

“When we started, me and Sam would literally respond to every single comment,” Shane said. “The biggest thing for [apps like] TikTok is just engagement and interacting with your audience.”

Factor said once they hit around 50,000 followers on TikTok was when he realized that they might be able to work with the app full time. Now, as of Aug. 31, the main TikTok account has over 165,000 followers.

WalterPicks has a TikTok account for all 32 NFL teams where they post content aimed at fans of that team, as well as the main account, a basketball account and an NHL account. Between all 35 accounts, they total over 700,000 followers. Senior Matt Kane runs one account, “Bengals.WalterPicks,” which has amassed over 13,000 followers. Kane said he loves content creation, so finding a company that was hiring, and having the college connection, was a perfect opportunity.

“It’s honestly a dream to make content for people, even if one person is watching it or 1,000 people are watching it,” Kane said. “[Now], a lot of people are there to hear my opinions on [fantasy football], and it makes me feel valued. It makes me feel like what I’m doing is not only benefiting me, but it’s also benefiting all of my followers.”

Kane also said he only learned of the company by scrolling through TikTok, before he even knew that it had been started by Ithaca College alumni. By the time the job opportunity came around, which Kane found through a TikTok video from the main account, he said he had heard about who the founders were, but it did not cause him to take the job.

“I first heard of WalterPicks a year ago when they started all this content creation on TikTok,” Kane said. “I did hear about [Factor and Shane being alumni] from a couple of my sports media friends, but it first popped up on my TikTok For You page.”

Factor said he knows that the football tool is their best and most popular product, so making sure it stays that way is important to the company’s success. But he said the company is definitely more than just that, and he hopes they can keep growing it out to match the constantly changing landscape.

“I don’t think our entire business hangs on just the algorithm,” Factor said. “I think it’s much more than that now, even though that’s where it started and it’s obviously a big part of things. [But] the social media side of things, and also just our mobile app development … a lot of our competitors are just on desktop, and that’s another huge aspect of what we’re doing.”

As for what comes next, Shane said the current goal is just to grow the company. Right now, WalterPicks offers extensive help with fantasy football, as well as smaller tools for fantasy basketball and NCAA’s March Madness bracket. Shane said he and Factor are looking for ways to make that bigger.

“Football will always sort of be our bread and butter,” Shane said. “But there’s many more sports for us to conquer. … I’d love to get into soccer, baseball would be big, college sports. I think we definitely want to grow it out a little more, and we also have a couple ideas for other adventures to take on.”