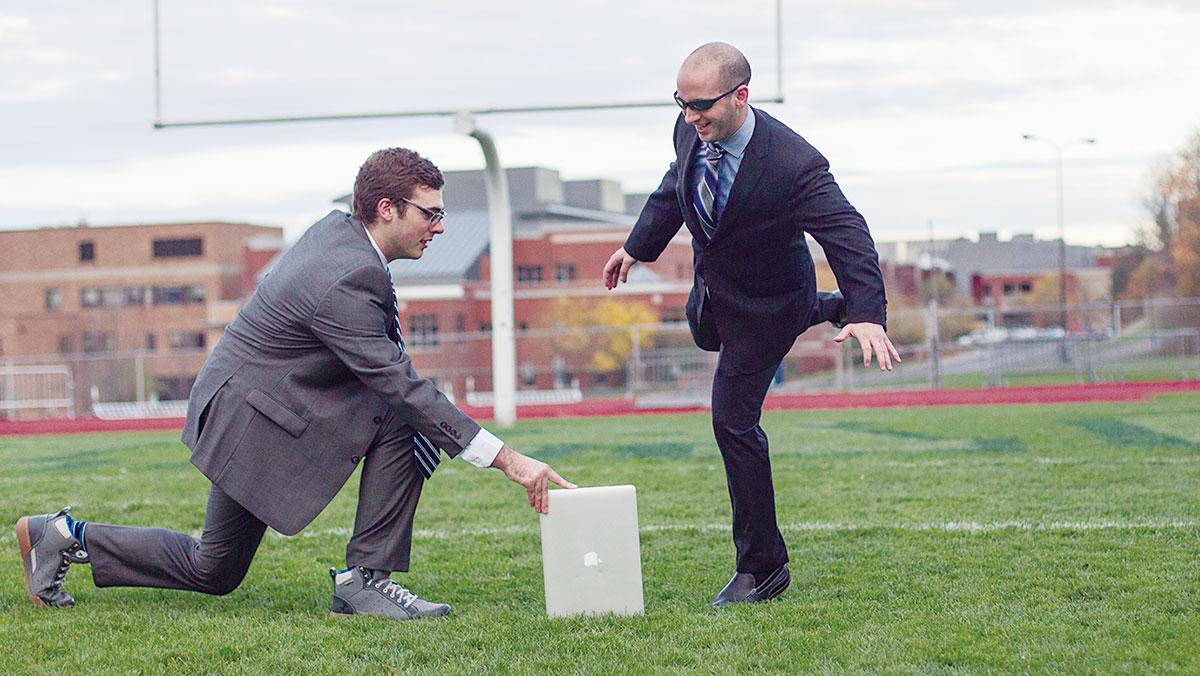 Fifteen-year-old Ian Stone is at the second floor of the Traffic Bar and Restaurant in New York City. As Stone sits down, he is surrounded by people all at least 15 years his senior. He’s nervous to begin because, between him and his brother, $250 is on the line. However, Stone tries his best to shake off the reality of the unfamiliar situation, looks back to his computer screen and makes his next selection. He’s becoming more confident with every pick, and the distractions fade away. In the end, Stone has an impressive fantasy football draft, and four months later he would win his league and its $1,800 prize.

“[The draft] was like nothing I’ve ever seen before,” Stone, now a junior at Ithaca College, said. “It helped me pay for my freshman year of college.”

Fantasy sports can be any sports competition in which the participants construct an imaginary team composed of real-life athletes. The scoring in the games is based on the statistics generated through the players’ actual performance. Typically, fantasy leagues are either “points leagues,” where a player’s performance accumulates a certain number of points each week based on the scoring format, or rotisserie leagues, in which the fantasy teams in a league are ranked based on separate statistical categories. According to the Fantasy Sports Trade Association, the oldest and largest trade group representing the industry, the most popular fantasy sport is fantasy football.

In addition to this being his third year at the college, it is Stone’s second year writing for fantasy sports websites like Fantasy Buzzer Inc. and Advanced Sports Logic. Stone is one of many aspiring journalists hoping to enter the fantasy sports industry, which Paul Charchian, president of the FSTA, said has risen in popularity each year for over a decade due to the rapid advancement of Internet technology.

While fantasy sports did not successfully reach a large audience until the late 1990s, Charchian said the expansion of the Internet was the biggest factor in the eventual growth of the industry. With online leagues, not only are fantasy scores automatically recorded from the games, the Web also allows people to interact and find other fantasy players, who are often complete strangers, online.

“You had some place that could run your league for you,” Charchian said. “Before [the Internet], you had to know other players. You had to know nine other people who wanted to play, and now you don’t have to.”

Charchian said he believes entering the industry as a journalist has never been more realistic because of the accessibility to information the Internet provides and the plethora of fantasy sports content websites.

Stone continues to practice his craft during the fantasy football season, which typically spans from August to December. To differentiate himself from other writers who offer advice and analysis on which players to target for a fantasy team, he looks at pre-draft rankings on several websites before making his own rankings for players based on team depth charts.

Additionally, he said he looks at non-statistical factors, such as whether a quarterback plays their home games in a dome, since it is easier to move the ball in the second half of the season without the potentially hazardous winter weather. When two players have similar attributes, he looks at team schedules to determine who has the best matchups at the end of the season, which coincides with a typical fantasy football league’s playoff format.

For both websites, he works under editor John Adams and said both sites help him gain valuable experience working in media.

“It helped me get my internship with [entertainment studio] Broadway Video this summer, and that’s just the beginning,” Stone said. “I could see it propelling me forward as I look to advance within the field and in my career.”

As the co-founder of DraftSharks.com, a subscription-based website dedicated to fantasy football analysis and advice, Lenny Pappano said his company distinguishes itself by focusing solely on fantasy football through a select group of full-time writers. In contrast, other fantasy sites, such as Rotoworld.com and Yahoo Sports, may change their focus depending on which sports are in season.

“We just do football, and that’s all we’ve ever done,” Pappano said. “We don’t do any crowdsourcing. Our opinions are the four or five writers that do this full time, and that’s how we shape our opinion.”

One of Pappano’s writers is Matt Schauf ’02, who has seen fantasy football transform from a hobby and extension of his sports fandom to a primary source of income.

During his first job after graduation as a page designer and copy editor for The Daily Star in Oneonta, New York, Schauf began writing a fantasy football column for the newspaper on the side because he was most familiar with the industry, having played in online leagues since the beginning of college, whereas his co-workers had little to no experience playing in leagues. He said even after connecting with other writers in the industry through the Fantasy Sports Writers Association message boards, it took about five years for fantasy sports writing to become a full-time job for him when he was hired as a writer for ProFantasySports.com in 2005.

Mead Loop, associate professor in the college’s Department of Journalism, specializes in fantasy sports journalism research and its increasing trends. While the Internet has been important to the growth of fantasy sports, Loop said it has continued to have success because the industry has financially sustained itself.

“The growth of the industry … is because it has been able to monetize itself,” Loop said. “That’s where the real success is.”

Though over half of about 41 million Americans who play fantasy sports participate for free, Charchian said, the other half spend an average of $67 in entry fees per year which, while inexpensive on an individual basis, allows companies that generate content to sustain themselves.

Schauf said he believes part of the reason fantasy sports are becoming so popular is because of the potential to win money in leagues that require a registration fee, giving it similar traits to gambling.

“It shares that same appetite that would make people want to bet on sports,” he said. “Everybody thinks that they know a lot about the sports that they love, so they love having ways to try to prove that.”

However, while some forms of gambling possess a strong element of chance, Loop said success in fantasy sports requires expertise for the respective sports.

“I look at it differently because I think it takes skill to win at fantasy sports, and I think the journalists providing content are using data as well as good writing to try to produce insightful articles,” Loop said. “I think it’s more a skill set than pulling the lever on the nickel-slot machine, which is pure chance.”

Given its steady increase of participation over the past decade, Loop added that he doesn’t believe fantasy sports have reached a saturation point, and that its ceiling will continue to grow.

“What you have is a much more mature journalism industry now,” he said. “This industry has grown up, and the journalists doing this full time have adopted most of the norms of journalists who are in sports or news.”

As Stone continues to find new ways to evaluate players, he said he will continue to play and write about fantasy football, so long as it feels like a pastime, rather than a form of employment.

“In my mind, if it begins to become a job and it doesn’t feel like I’m really enjoying myself anymore, then I won’t do it,” Stone said. “I love it. It’s a great quote, I can’t remember who it’s by, but, ‘If you love what you do, you’ll never work a day in your life.’ That’s the point I’m at with my life right now, and I would like to keep that going.”