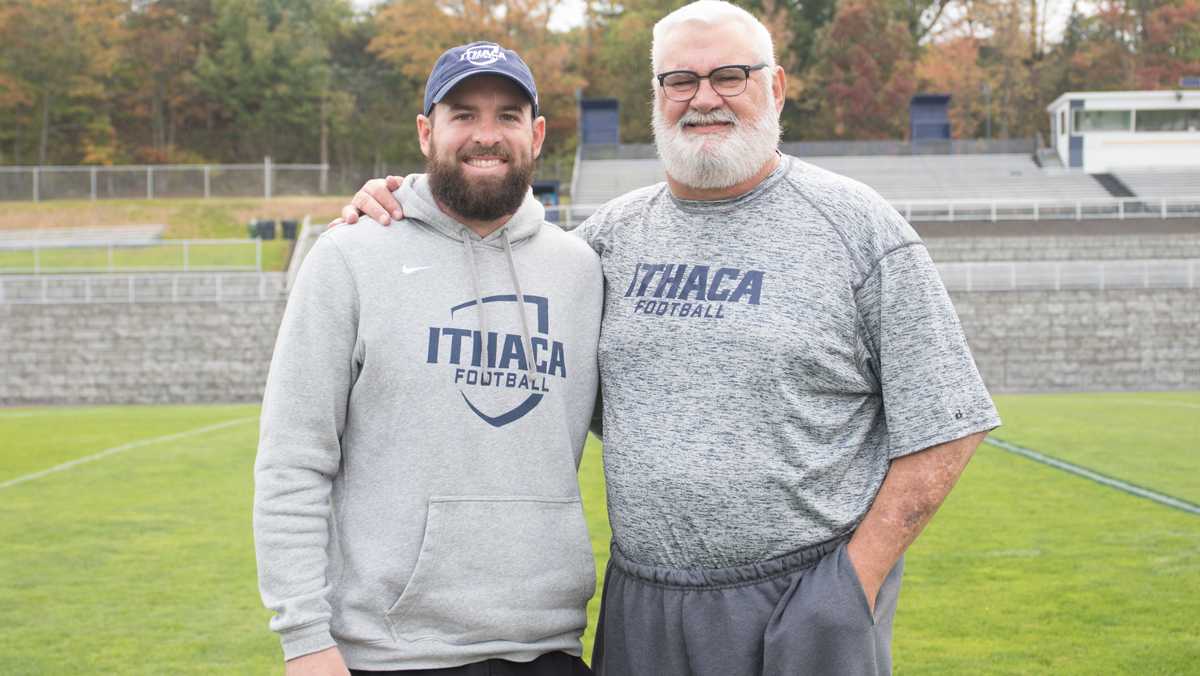 On Dec. 10, 2011, Warren Trahan announced he was retiring from coaching high school football so he could watch his son, Brody, play his final two seasons as a linebacker at Baylor University. In the summer of 2017, Warren came out of retirement to join Brody on the football coaching staff at Ithaca College.

Brody, the linebackers coach for the Bombers, was a four-year letterman at Baylor from 2010–13. He was named captain for his senior season, and helped guide the Bears to a Big 12 Conference championship and an appearance at the 2014 Tostitos Fiesta Bowl, where they lost to the University of Central Florida 52–42. They finished the season 11–2.

Warren, who goes by the nickname “Bull,” is the college’s defensive line coach and played defensive tackle at Texas A&M University, where he was named twice to the All-Southwest Conference first-team. He signed a free–agent contract in 1975 with the Dallas Cowboys and saw action in two preseason games.

Once his playing career ended, Warren went into coaching and took his first head coaching job in 1981 at Cypress-Fairbanks High School in Cypress, Texas. After coaching at two other high schools, he retired with a career record of 200–136–4, making him one of 69 coaches in Texas high school football history to win 200 games in his career. He was inducted into the Greater Houston Football Coaches Association Hall of Honor in 2009.

Toerper and Brody met when Toerper was coaching defensive backs at Johns Hopkins University and Brody was a graduate assistant coach at Baylor. Toerper would go to Baylor in the offseason to meet with Bennett, and he got to know Brody well. When Toerper needed to hire a linebackers coach for the Bombers, he said that Brody was his first call.

“Having a guy like Brody around is so great because we played for the same defensive coordinator in college, so we have very similar views on various aspects of how to coach a defense,” Toerper said.

Going into the 2017 season, the Bombers already had a defensive line coach, Tyler Williams, but Williams accepted another coaching job two weeks before training camp started. With no prospects for a replacement, Brody suggested that his father come up from Texas and fill the position for one season before returning to retirement.

Brody said the suggestion was a no–brainer.

“He had been retired for four years or so, and I knew he had extensive knowledge on the defensive line, so I asked Coach Swanstrom if I should call my dad, and Dad came running,” Brody said.

Brody said that coaching alongside his father is an opportunity he has always wanted but did not think would ever happen once Warren retired.

“It’s been a dream come true for me,” Brody said. “Once he retired, my hopes of getting to coach with him were kind of out the question, so for us to get this opportunity has been incredible.”

Warren said he has always wanted to coach at the collegiate ranks.

“This has been great for me,” Warren said. “It has always been a dream for me to coach at this level, and I couldn’t be happier.”

Warren’s breadth of football knowledge has been an invaluable addition to the coaching staff, Toerper said.

“Bull has forgotten more about the game of football than I have ever learned,” Toerper said. “I am as fortunate as I can be as a first-time defensive coordinator to have a guy like him on the staff.”

Sophomore defensive end John Hadac said that being coached by someone with Warren’s experience has benefited him greatly.

“Coach Bull has been around for a long time and brings a lot of expertise,” Hadac said. “He’s a wise man, and he’s been helping us out a lot.”

Senior linebacker Dan Loizos said that having Brody as his position coach has helped him greatly with his technique.

“He’s helped us work on being better athletes and change direction better, which has really helped me in my game,” Loizos said.

“We have a new system, and they have to buy into it,” Warren said. “It was a growing process to start, but as soon as they bought in, which they have, we’ll start to get a lot better.”