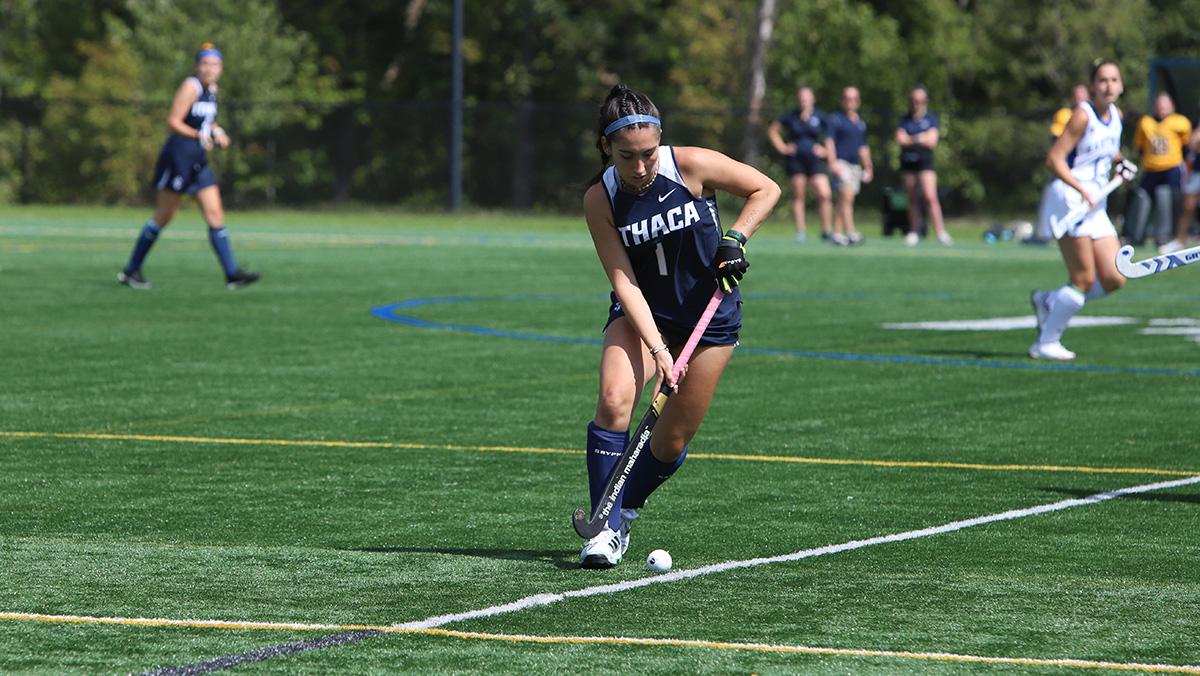 The Ithaca College field hockey team registered their fourth win in a 5–1 victory over the Hartwick College Hawks on Sept. 10 at Higgins Stadium, bringing the team record to 4–0.

The initial quarter rendered a slow start on both ends of the field. With a lot of physical midfield play and little possession in either team’s territory, the first few minutes of the period allowed some time to adjust for both the Bombers and the Hawks.

Although the Bombers were the first to be awarded a penalty corner halfway through the quarter, the Hawks’ junior forward Holly Calore was the first to tally a point on the board for the Hawks eight minutes into contest.

With the Hawks in the lead, the Bombers brought high energy into the second quarter, immediately taking control of possession time. The team picked up two back-to-back penalty corners after consistently creating offensive opportunities early in the frame. Junior striker Avery Moses put up her first goal of the season 6:59 into the quarter. The point, assisted by senior midfielder Nicole Fortunato, tied the competition at 1–1.

The Bombers continued to control Hawk territory with sophomore striker Juliana Valli putting up a second goal with 5:25 remaining in the second quarter. The goal, Valli’s first of the season, was assisted by sophomore striker Natalie Descalso, giving the Bombers a 2–1 lead

Following halftime, the Bombers started with possession and maintained their tenure over Hawk territory. The team extended their scoring lead to 3–1 early in the third quarter following an unassisted fastbreak goal scored by senior striker Morgan Mullen five minutes into the period.

The third quarter was littered with offensive opportunities on both sides of the field, with the Bombers and the Hawks each earning penalty corners at 7:29 and 3:27 remaining, respectively. However, the remainder of the frame was ultimately scoreless.

Junior striker Sarah DeVito put up a fourth goal for the Bombers 2:44 into the final quarter of the game. The point, assisted by Descalso, marked the Hawks’ senior goalkeeper Madison Maddocks’s final goal allowed before the Hawks checked in first-year student goalkeeper Amanda Klopper.

Descalso would later score on Klopper, earning the Bombers their fifth and final point with an unassisted fastbreak goal only 16-seconds after their previous goal.

“I was just thinking: I have the speed, I’m going to go for it,” Descalso said. “Once I got past my defender, it was just me, the goalie and the back of the net.”

The Hawks went on to earn six back-to-back penalty corners, posing valuable scoring opportunities on each one. However, the Bombers’ junior goalkeeper Alex Clough was able to successfully shut down each of them, ultimately securing a victory for the South Hill squad.

Head coach Kaitlyn Wahila said that following this game, it will be essential for her team to remember what it feels like to be scored on first.

“We’re not invincible; we will get scored on,” Wahila said. “It was just the perfect reminder that we have to be able to play our game rather than dwelling on the scoreboard.”

Valli said how important it is for her team to remain collected under the pressure of allowing the first point of a game.

“When [the Hawks] scored that first goal, it’s easy to get a little torn up about it,” Valli said. “But we stayed super calm and composed which really showed throughout the rest of the game.”

The Bombers will next take on the Dragons of No. 18 ranked SUNY Cortland in on the road matchup at 7 p.m. Sept. 14 at the SUNY Cortland Stadium Complex.