Field hockey defeats Hawks for third shutout of the season 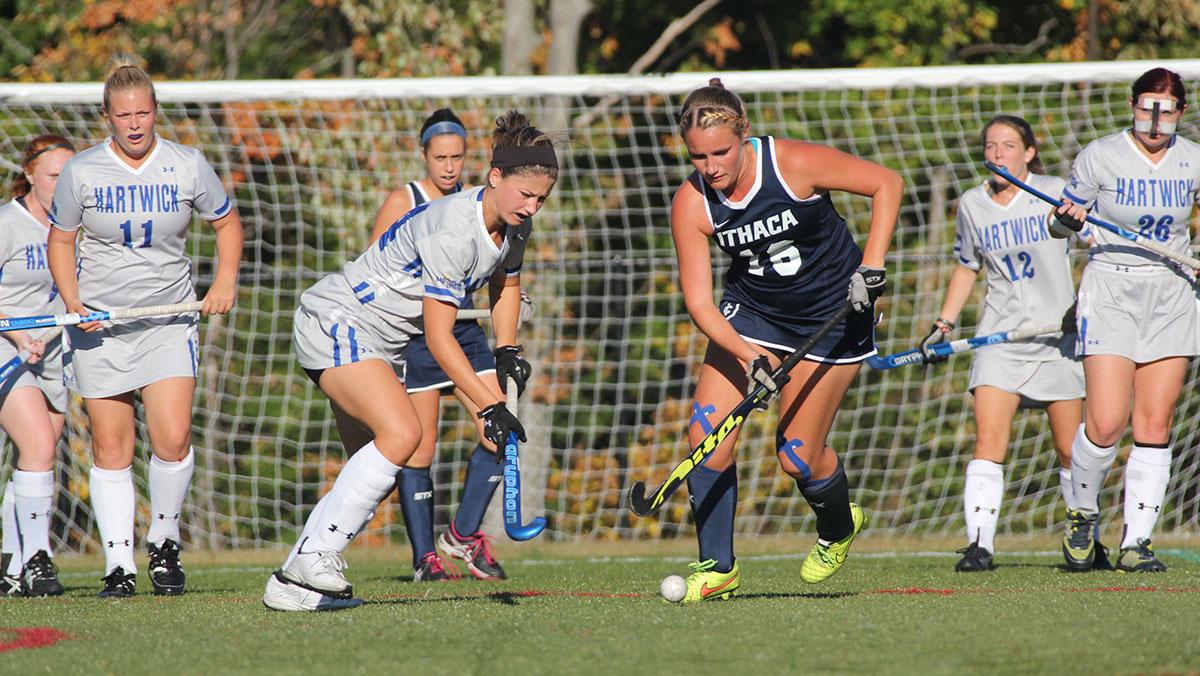 Coming off a tough 1–0 loss to St. John Fisher College on Sept. 19, the field hockey team continued its Empire 8 conference schedule against Hartwick College with a 4–0 win over the Hawks to improve to 5–2 on the season.

Hartwick came into the contest on a two game winning streak, in which it outscored its opponents by a combined score of 7–2. Hartwick was also looking to avenge its 3–1 loss at the hands of the Bombers in the final game of the year last season.

The team was awarded two penalty corner kicks in the first five minutes of the game. However, both were denied by the Hawks’ defense.

The Blue and Gold kept the pressure on early, pounding six shots toward the net in the first 10 minutes of action, but had nothing to show for it on the scoreboard. The Bombers would break through with 20 minutes to go in the first half.

Sophomore Michaela Donohue potted her third goal of the season off a swift pass from freshman Viktoria Schultz. The shot sneaked past Hartwick goalie Shannon Carter into the lower left corner to give the Blue and Gold the early advantage.

Schultz said she was pleased to notch her first point of the season and to contribute to the team.

“I usually just run back and forth,” Schultz said. “My team usually does everything, but I’m just happy they made me look good.”

With nine minutes to go, the roles would be reversed as Schultz knocked in her first goal of the year off Donohue’s second assist of the season, making it 2–0 Bombers.

The goal was set up by constant offensive pressure as the Bombers attempted four shots in the seven minutes leading up to the goal.

The team would hold on to that 2–0 advantage and head into halftime with the lead for the third time in its last six contests.

With 30 minutes remaining in the second half, the Bombers nearly added to their total when a rebound squeaked by the left pad of Carter, which was seemingly headed toward an empty cage when junior Jen Spagnuolo dove back to knock the ball away as it neared the goal line.

The Bombers continued to pound the Hawks in their defensive zone and it paid off with two goals in 43 seconds. The first was junior Cassie Schuttrumpf’s third on the year, a powerful backhanded shot that found the net that staked the Bombers to a 3–0 lead.

Junior Lauren Delia found the net next to finish off the Hawks, with an assist from Donohue, giving her two points on the day and three total on the year.

Delia said her main focus is to provide offensive production in order to keep winning games.

“I just kept my stick down and made sure there wasn’t any backspin,” Delia said. “Scoring lots of goals is important because if we want to win the Empire 8, that’s what it’s going to take.”

The goal made the score 4–0 Bombers and chased Carter from the game.

The Blue and Gold closed out with solid defense and prevented Hartwick from getting anywhere near the offensive zone.

Donohue said the quick turnaround for the team provided momentum for the Bombers.

“It was pretty impressive,” Donohue said. “We came out hard and beat them, we want to keep winning and a game like this just brings us one step closer to a championship.”

With the win, the South Hill squad picks up its fifth victory and travels to take on Nazareth College at 1 p.m. Sept. 26 in Rochester, New York.