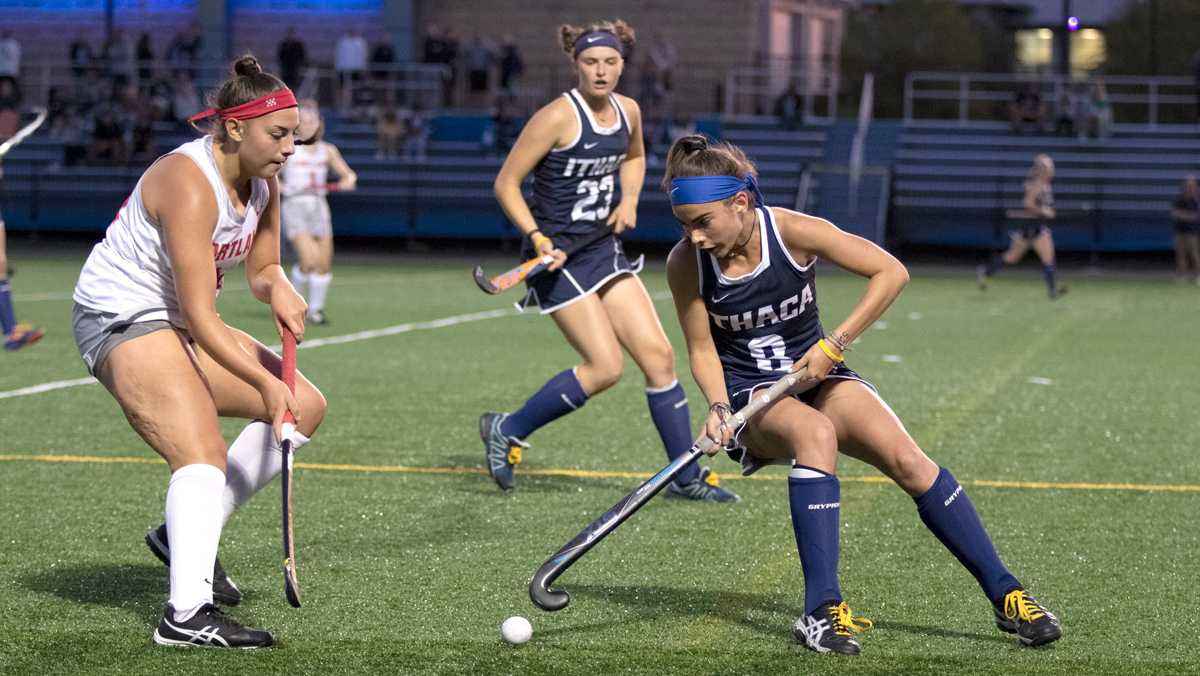 The Ithaca College women’s field hockey team lost to SUNY Cortland by a score of 2–1 Sept. 18 in Higgins Stadium, bringing their record to 5–2.

The South Hill squad took a 1–0 lead after a goal from sophomore striker Samantha Horowitz off an assist from defender Victoria Sestito with 12 seconds left in the second quarter. However, Cortland senior striker Molly Quinlan put away two goals in the first five minutes of the third quarter, with the second coming off an assist from senior midfielder Hannah Burchell, making the score 2–1, where it would stay.

This game brought intensity from the first whistle to the last. In the first quarter, both teams took turns dominating possession. The Bombers came out of the gates slow but started to press high and pick up the pace around the 10-minute mark. They held possession until the Red Dragons took it back with five minutes left, and from there, momentum continued to switch.

Neither team found the back of the cage until the final moments of the first half. The ball fell to Sestito, who fired it into the box onto the stick of Horowitz. She put it past the keeper for the game’s first goal with 12 seconds to spare in the half.

The first five minutes of the third quarter made the difference in the game, as Quinlan dribbled through the Bomber defense and scored with 12:07 left. Less than two minutes later, she scored again off a Burchell assist from a penalty corner.

Kaitlyn Wahila, Ithaca College women’s field hockey head coach, said Cortland made the most of the opportunities it had.

“We had a couple breakdowns tonight,” she said. “Cortland’s a great program and were able to capitalize on our mistakes just a couple of times.”

The Bombers had several chances to equalize the score. The most notable of these came in the opening minutes of the fourth quarter off a penalty corner, where Sestito fired the ball back-post to sophomore striker Morgan Mullen — the same play that resulted in a Mullen goal in the squad’s game against Hartwick College. However, the ball took an unlucky bounce over Mullen’s stick and the game remained 2–1.

Sestito said that the team demonstrated its work ethic and competitive attitude in the loss.

“We fought until the end,” she said. “I think we really showed our grit and dedication. I think that our team’s special, and we’re just going to bounce back and keep working.”

The Bombers return to action at 6:30 p.m. Sept. 21 against SUNY Geneseo in Geneseo, New York.