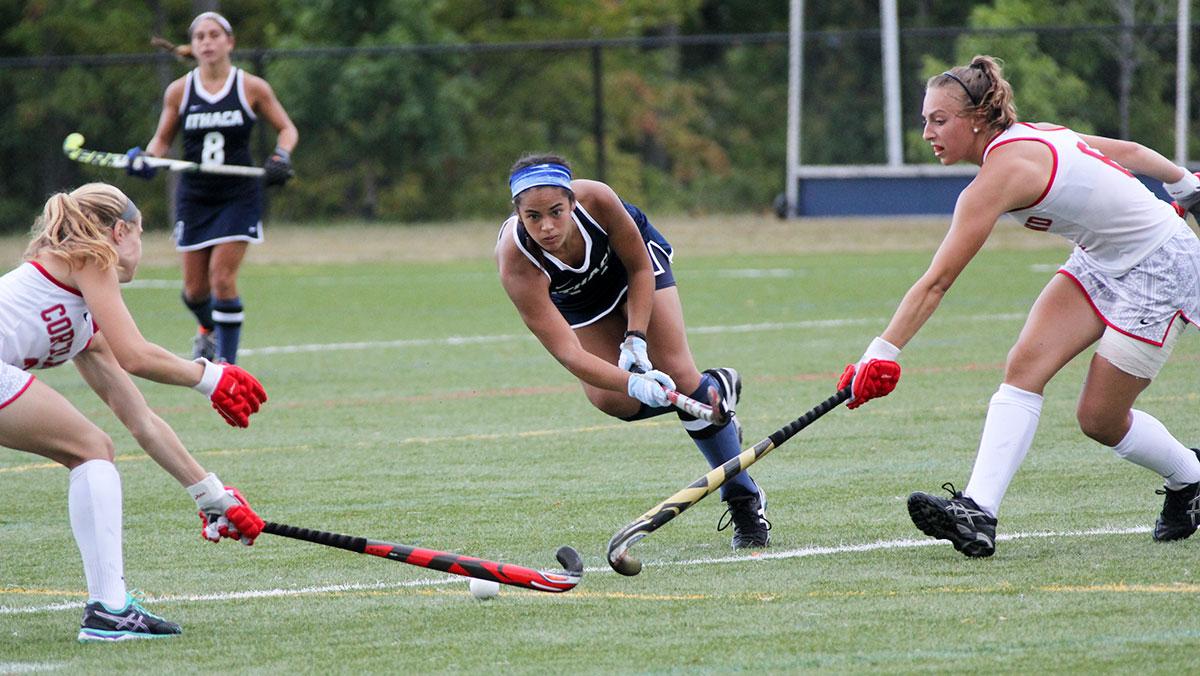 The field hockey team was back on the field Sept. 9, looking to defend its perfect 2–0 record against the No. 19 ranked SUNY Cortland Red Dragons.

However, the Blue and Gold could not get it done on the pitch, as they dropped a 1–0 overtime loss at the hands of their rivals.

The team nearly capitalized early on, but junior Lauren Delia’s shot trickled just wide of the Red Dragons’ net at the 5:07 mark.

Midway through the first half, with the game locked in a scoreless tie, the Bombers mounted a rush using some nifty passing. However, the play lost steam as they approached the Cortland cage, with a shot by sophomore Amanda Schell dribbling just wide of the net.

With 13 minutes remaining in the first half, Cortland created a scrum in front of the Bomber net off a Victoria Dean penalty corner, but junior goalkeeper Katie Lass made a diving stop to preserve the tie at 0–0.

The squad nearly broke through with another chance in front of the Cortland net with 30 minutes remaining in the second half.

Junior forward Cassie Schuttrumpf pushed the ball past freshman goalie Kailynne Reinoehl, but the rest of the Red Dragon defense swarmed the net to it shut down.

The Bombers flashed some strong team defense of their own, turning aside 10 penalty corners in the first 45 minutes of action alone. The Blue and Gold crisply attacked the ball for most of the game, forcing the Red Dragons into poor passes and turnovers all day long.

With 12:20 left in the match, it appeared momentarily that the Bombers had broken the ice, as senior Caitlin O’Brien fired a blast off a corner pass from Schell, but the goal was waved off by a penalty.

Six minutes later, Schuttrumpf narrowly missed a goal for the second time as her golden opportunity was turned aside by Reinoehl.

With no resolution to be found in regulation, the game headed into an extra session.

The Bombers put the pressure on early in overtime, with two penalty corner chances. The first was knocked away before the Bombers could shoot, while the second resulted in a shot that dribbled wide of the net.

With 5:39 left in the extra session, Cortland nailed home the game winner by Alexa Sanzone, which was her first of the season despite a valiant effort by Lass to make the save.

Lass said it was difficult to swallow the end result.

“It was tough, I saw the shot the whole way in, but there was nothing I could really do about it once it got there,” Lass said.

Heading into the matchup, the Bombers defeated SUNY Oneonta and Washington College by identical 3–1 scores, while SUNY Cortland split its two games, a 5–0 win against Elmira and a 2–0 loss to Skidmore as both teams had perfect records.

O’Brien said the loss was stunning and a rude awakening for the squad early in the season.

“It was definitely a wake-up call,” O’Brien said. “But it just motivates us heading into [conference play].”

The South Hill squad opens its Empire 8 competition against Washington and Jefferson College as it travels to Washington, Pennsylvania, to take on the Presidents at noon Sept. 12.