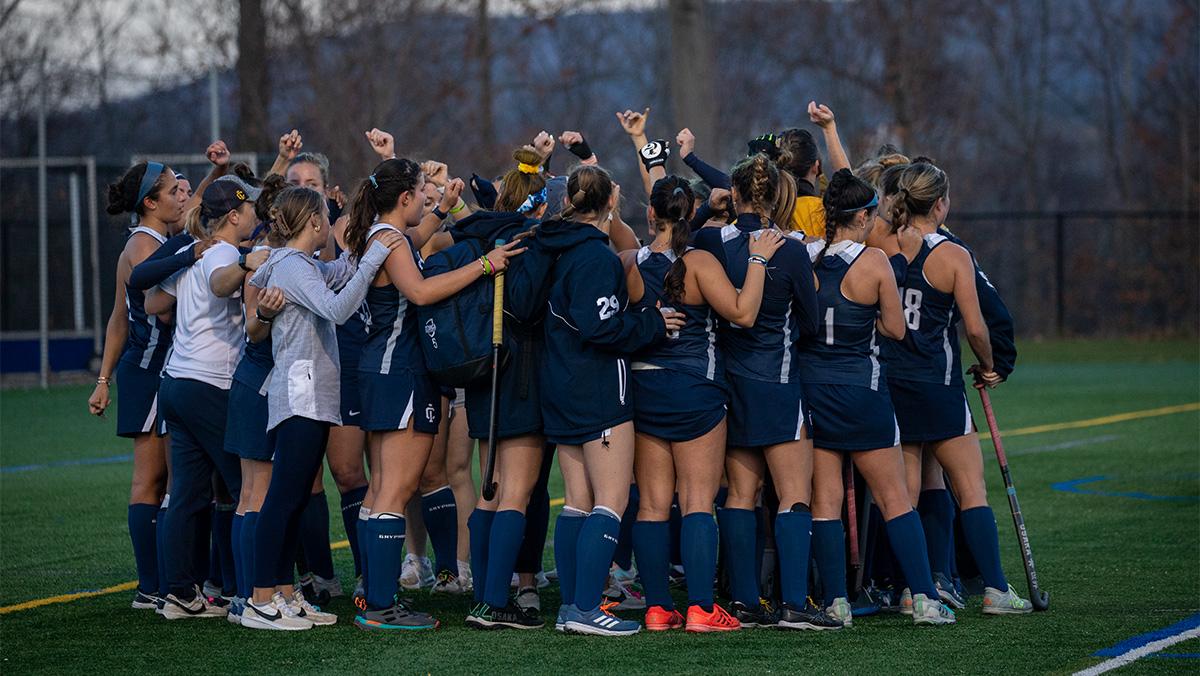 Brendan Iannucci/The Ithacan
The Ithaca College field hockey team will finish their 2022 season with a 14–4 record following a 1–0 loss to the Herons. The team still has a chance to earn an at-large bid in the NCAA DIII field hockey tournament.
By Tess Ferguson — Staff Writer
Published: November 4, 2022

After coming off of a victorious Senior Day against the William Smith College Herons on Oct. 23, the Ithaca College field hockey team fell 1–0 in an overtime loss during the Liberty League Championship semifinal game in a heated rematch.

The initial quarter was dominated largely by the Herons’ offensive line, managing to possess the ball in Bomber territory for the entirety of the frame. Despite the unwavering pressure, with the Herons earning three penalty corners throughout the quarter, the Bombers’ defense managed to stand its ground, holding the Herons to only one shot on goal. Graduate student goalkeeper Macy Brandwein notched a crucial save within the final minute of play, ultimately rendering the first quarter scoreless.

It was in the second quarter that the Bombers began to adjust to the skill of their opponent, managing to level the playing field in terms of possession time to create more offensive opportunities. While the Bombers out-shot the Herons 3–1, the Herons’ junior goalkeeper Kristen McCormick put up a strong performance to keep the competition scoreless heading into halftime.

The Bombers opened the second half with a lofty aerial pass deep into Heron territory, kicking off an aggressive, evenly matched quarter. After playing nearly half of the frame a player down with a green card and a yellow card issued to sophomore midfielder Meara Bury and senior midfielder Nicole Fortunato, respectively, the Bombers’ composure was showcased through skilled play on both ends of the field. Brandwein played a vital role for the Bombers, coming up with four impressive saves to hold the board at 0–0 for yet another quarter.

Tensions rose in the final frame of competition, with physical midfield play landing both teams in a defensive stalemate. Offensive opportunities were sparse on both ends of the field and turnovers were plenty with the Bombers out-fouling the Herons 10–8. With little breathing room in neutral territory, regulation ended without score, sending the competition into overtime.

The seven-on-seven post-regulation frame registered some hungry play from both teams, but it was the Herons that ultimately came out on top when junior defender Libby Maxwell was able to find the boards only 1:44 into play, drawing the season to a close for the Bombers.

Head coach Kaitlyn Wahila said that despite the outcome of the matchup, her team put their all into the semi-final game.

“This loss was not for a lack of energy, a lack of grit or a lack of effort,” Wahila said. “We both showed up ready to play, and we lost to a really great team.”

Wahila added that she is happy with her team’s overall performance this season, and that her time with this year’s squad is something that she will never forget.

“At the end of the day, I’m just really proud of this team,” Wahila said. “There are so many high moments when you look back at this season and see how far this team has come.”

Although the Bombers’ season has come to an end, the team will still have the opportunity to earn an at-large bid in the NCAA Selection Show taking place at 10:30 p.m. Nov. 6.