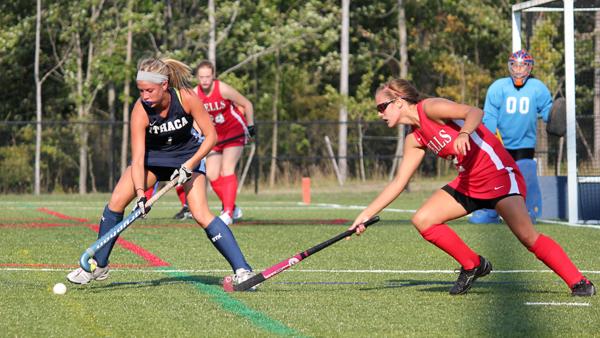 After a disappointing 2011 season, the field hockey team got off to a fast start by defeating Wells College 6-2 Friday afternoon at Higgins Stadium in a game that they dominated from the start.

The South Hill squad held the Wells College Express scoreless in the second half and had six players score goals in the win. The Bombers opened the scoring five minutes into the game with a goal from junior forward Katie Kennedy on an assist from junior forward Lindsay Flanagan.

Sophomore midfielder Rachel Weston said the early goal fit right in with the team’s desire to set the tone by getting an early lead.

“The key to today’s game was to come out and score first and to play to our level the best we can,” Weston said. “We needed a good start to get momentum going.”

After Wells tied the score at 1 in the 16th minute, senior forward Julia Conroy put the Bombers ahead for good with an unassisted goal at 22:09. Junior midfielder Andrea Pace scored the squad’s third goal on a penalty stroke for a 3-1 lead before the Express got the game back to 3-2 with 48 seconds left in the first period.

Wells stayed within sight of a tie for the first 18 minutes of the second half until sophomore forward Natalie Lynch and freshman forward Olivia Salindong finally extended the lead with a pair of unassisted goals in a seven-minute span. With two minutes remaining, Weston cashed in a pass from Pace to seal the four-goal victory for the Blue and Gold.

Sophomore forward Amber Foose said she was excited about the South Hill squad’s  energy level and the way her team was able to execute its game plan after making adjustments for the second half.

“We really accomplished [the win] by working together and remembering what we learned in practice and applying it in a game,” Foose said. “We kept up our intensity and really played aggressive. We just need to keep it up.”

Weston said she was pleased with the victory, but cautioned that there is a lot of work to be done this season if the Bombers want to return to the Empire 8 Conference playoffs.

“As a team we are always improving,” Weston said. “It’s only the first game, so there is a lot more that we are going to learn. But we also already learned so much in the preseason.”