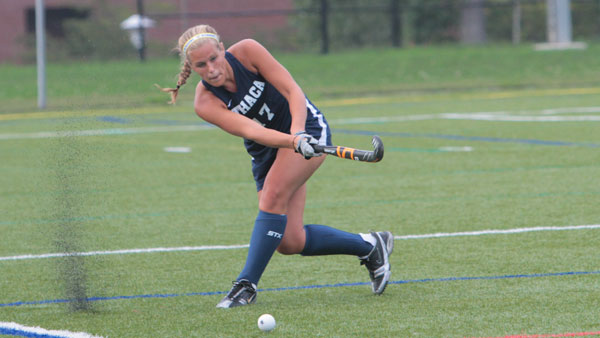 The wood and fiberglass material of the field hockey stick creates a sleek line from the top of the handle down to the beginning of the curved toe. The inside of the stick sits flat while the outside holds a slight curve, limiting field hockey players, including the Bombers squad, to a thin area on one side of the stick to win games.

Even with the stick’s limitations and lack of versatility, the Blue and Gold field hockey offense can’t be stopped this season as it’s averaging almost six goals per game. Freshman forward Lauren Delia said the team can attribute a great deal of its success to stick control.

“Our strong skills allow us to have control over the ball more of the time and makes us work better together,” Delia said. “Almost every day we practice basic stick skills, passing and moving around people, and the extra practice really helps.”

While they all play a field position, forwards, midfielders and backs use their field hockey sticks in different ways.

Athletes playing forward try to have only one hand on the stick when sprinting up the field unless they are dribbling, which requires both hands on the stick and the low squat field hockey stance while keeping the same sprint speed.

Emily Lash, senior midfielder and back, said as a defender, she must focus on staying low and keeping control of the ball to send it out of the circle, rather than moving quickly down the field.

“You have to have good positioning of the field hockey stick and have good control of it,” Lash said. “As a defender, you have to be able to have control to stop the ball well and hit the ball really quickly, because you need to get rid of the ball before offenders are coming in.”

The stick poses an even greater challenge for the goalie, because she’s required to keep her stick in only one hand underneath a hand guard. While goalies have the benefit of using their pads to deflect the ball away from the goal, the stick is still needed for different situations, such as getting a longer reach when trying to make a save.

Freshman goalie Katie Lass, who has earned two shutouts for the Bombers this season, said even though she is supposed to depend on her pads, her stick gives her an advantage for certain shots.

“I use my stick a lot even though most goalie coaches tell you not to,” she said. “But with the stick, I can get more extension on my dive, I can use it on my sweep or I can lift my stick up in the air for an aerial shot to help deflect it.”

When fully equipped in their pads, the number of times the goalies can use a field stick is limited, especially because they cannot bend at the knees. As a result, Lass said she needs a specialized stick that is flat on both sides to help her, but it doesn’t make her exempt from the rules.

“It is curved more than a normal stick, and it has a bigger toe, but I still have to flip the stick over,” Lass said. “[The shape] does make it harder to lift the ball, because it is curved, so my goalie stick is flat on both sides, and that helps me when I am trying to get the ball out.”

With their strong beginning of the season seeming to stem from their offensive, Delia said winning depends on every athlete, and it begins with impeccable stick work by all of the Bombers.

“Our team works really well together, so we excel in the league with our skills,” she said. “Our skills have set us apart and helped us score goals, but everything starts with the defense, so it’s really a team effort.”