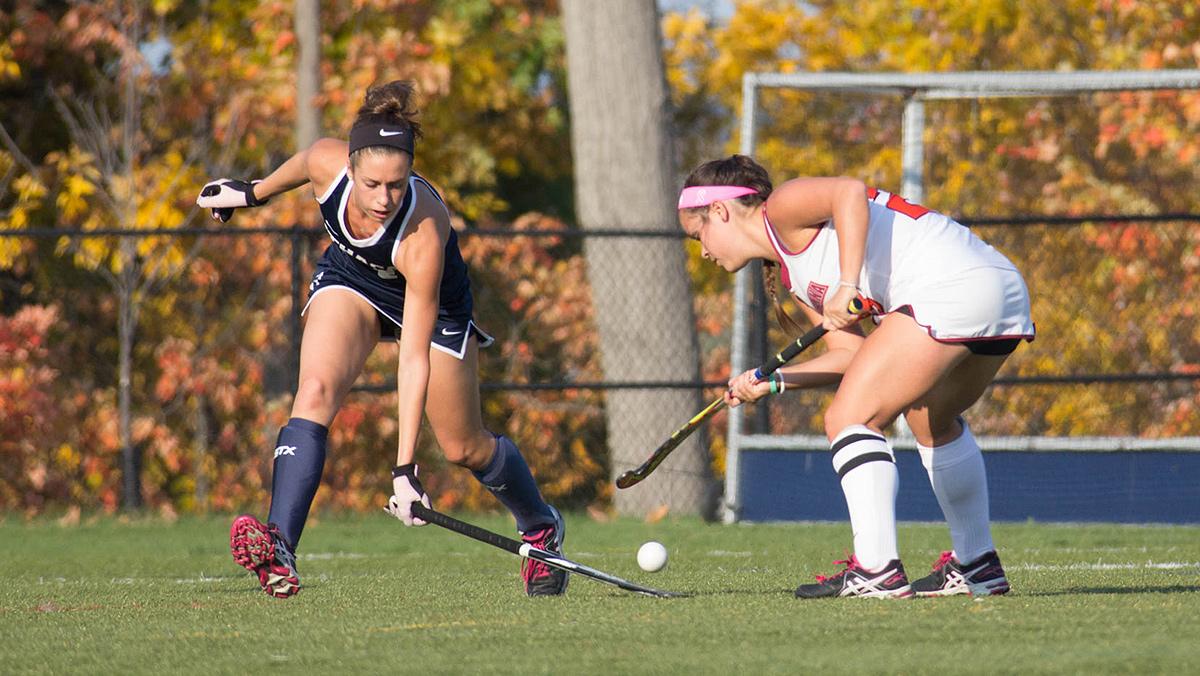 After dropping three straight road games, the Ithaca College field hockey team returned to Higgins Stadium on Oct. 18 against Susquehanna University. The Bombers fell to Susquehanna 5–3 and are now 5–7 on the season.

Through the first five minutes of play, the teams were evenly matched, but most of the play occurred on the Bombers’ half of the field. With 27 minutes left in the opening half, the Bombers recorded five straight shots on net, four of which were saved by Susquehanna’s freshman goalkeeper Emily DiGaetano. The fifth was tipped in by senior forward and midfielder Colleen Keegan-Twombly off a centering pass from junior midfielder Amanda Schell, putting the Bombers up 1–0.

With 15 minutes remaining in the half, Susquehanna was given a penalty corner opportunity. Freshman midfielder Mini Kifolo began the action by squeezing the ball through two Bombers defenders to the high slot. The pass was immediately slammed home by senior forward Emily Novakovich, knotting the game at 1–1 heading into halftime

Four minutes into the second half, Novakovich picked up her second goal of the game off an assist from sophomore forward Taylor Franco, giving the River Hawks a 2–1 lead. After a Bomber timeout, junior forward Michaela Donohue attacked the Susquehanna net from the left to tie up the game.

Susquehanna grabbed the lead back with just over 20 minutes left to play. Franco scored the River Hawks’ third goal of the day into the net, setting the score at 3–2. Shortly after, junior forward Jordan Burkepile added another tally for the River Hawks, making it 4–2.

The Bombers tried to mount a comeback with six and a half minutes left. Senior midfielder and forward Cassie Schuttrumpf scored off of a penalty kick to pull the Bombers within one goal of the River Hawks. Susquehanna extended its lead back to two shortly after, when freshman midfielder Hunter Pitman fired home. Susquehanna went on to win 5–3.

Bombers head coach Tracey Houk said the team worked hard, but was not able to come out with the win.

“We’re taking this as a gut check,” Houk said. “Susquehanna was strong, and we didn’t come out as strong as we could have.”

Senior goalkeeper Katie Lass made 12 saves. She said the defense has things they can improve before the next game.

“We just needed to communicate more,” Lass said. “We tried to make a few mental adjustments, and our passes needed to be crisper, but there were some lulls.”

Susquehanna coach Kaitlyn Wahila said she was proud of the way her team responded in such a crucial stretch of their season.

“We have a huge in-conference game against Elizabethtown,” Wahila said. “They’re undefeated in conference. We knew we had to play well today in order to keep the magnitude of that game intact, and we did that.”

The Bombers play again at 1 p.m. Oct. 22 in Higgins Stadium against Washington and Jefferson University for senior day.