Members of the field hockey team tried out for goalie position 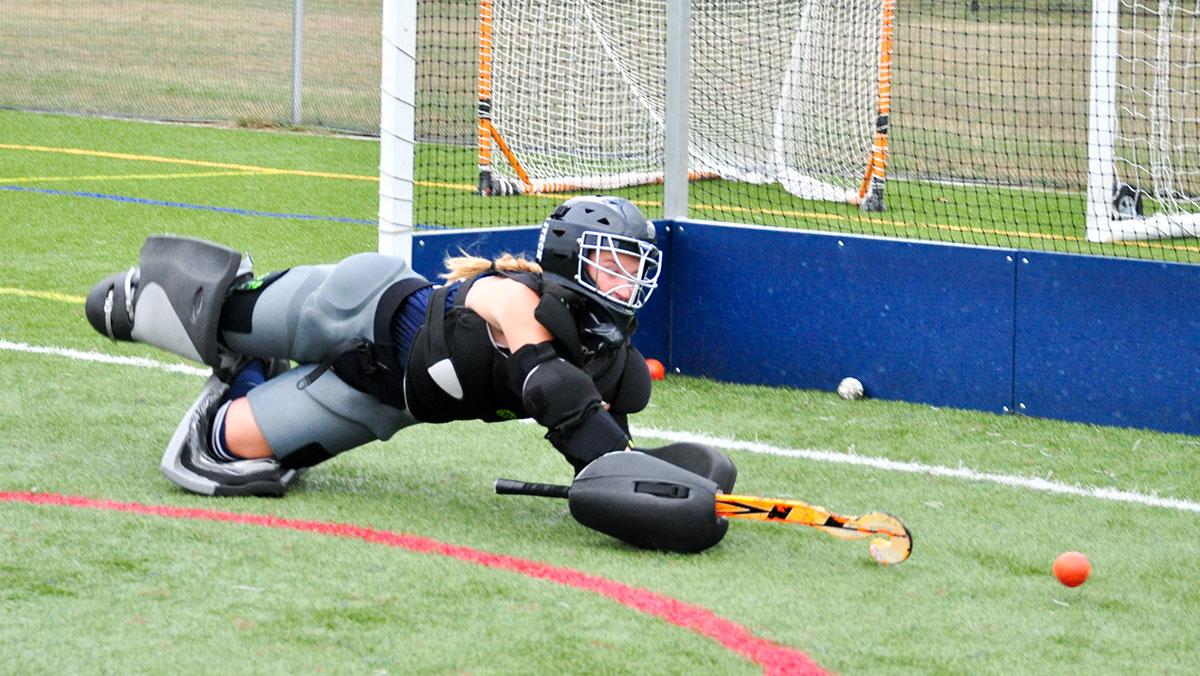 Typically, on an athletic team, there are multiple players occupying the same position. Whether in case of injury, emergency or even game-induced fatigue, it can bring a sense of relief knowing there’s another team member to quickly rely on.

For the entirety of the 2014 season, junior goalkeeper Katie Lass had to defend the goal alone, as she was the only one on the team in her position.

In 2014, Lass started and played in all 16 games for the Bombers as the primary goalie, compiling 1146:35 minutes of playing time.

Lass said being the only goalie put a significant amount of pressure on her.

“I mean it was hard to think about what would happen if I got injured,” Lass said. “I just kind of had to take care of myself and try to stay healthy, and [thankfully] I managed to.”

The start of the 2015 season was an opportunity for Lass to find another goalkeeper for the team, which it hasn’t had since her freshman year. Although the team received a large number of freshman recruits, none of them were recruited to the school for the goalie position.

With there only being one goalie, head coach Tracey Houk and assistant coach Maureen Ordnung both saw it necessary for the second position to be filled immediately.

During this year’s preseason Aug. 19–25, coaches orchestrated tryouts available to any player on the team.

Houk said tryouts were a chance for those currently at preseason to attempt a new role on the field.

She said she noticed her competition was strong in numbers and decided to try any position she could, including goalie.

“I didn’t know going into this anyone else’s skill [level],” McDavid said. “There were 20 freshmen trying out, so I just tried whatever … I did anything I could to increase my chances.”

In total, four women decided to take the plunge and try on goalie pads. Out of the four players, Houk and Ordnung mutually decided McDavid was the perfect fit for backup goalkeeper.

Houk said she is impressed with how hard McDavid has been working at the new position, even when it comes to defensive players shooting on goal.

“She has an awesome attitude, work ethic, and a sharp learning curve,” Houk said. “They don’t hold back with her, and that means … they’re comfortable with her.”

McDavid said her previous knowledge of soccer has assisted her in this new position.

“I’ve played competitive soccer my whole life, so all the foot skills came really easily, but I’m still working on my hand skills,” she said.

McDavid said Ordnung has been extremely influential during the entire process, given that she is a former goalie herself.

“Both Katie and [Ordnung] have been so helpful,” she said. “Coach will even get in her pads and show us what to do. She does [the same] out of the pads too.”

McDavid said Lass has been a very pivotal part of her learning process.

“Katie is so good at what she does. It’s good to have her to lead by example,” she said. “It’s so much easier to mirror what she does than [coaches] telling me what to do.”

Lass said she assists with McDavid’s goalkeeping skills as well as self-motivation.

“Being a goalie is hard and it’s not going to come to you just like that, it’s going to take time,” Lass said. “[I’m always] making sure that she stays motivated. If she’s getting frustrated, [I] try to help her stay positive.”

Although McDavid does hope to play on the field again after this year, she said she is grateful for the knowledge she has gained from being in the goal so far.