Floor bans together to throw kickball tournament for student with leukemia 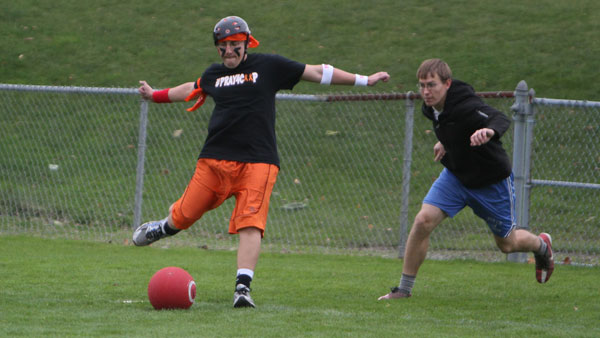 About 30 students gathered on Yavits Field to participate in the #Pray4Coop kickball tournament on Oct. 26. The purpose of the event was to raise cancer awareness and funds in support of fellow student Cooper Levine.

Levine, in his second week as a freshman at Ithaca College, was experiencing shortness of breath and could barely get up the stairs to his third-floor room in Rowland Hall. His friends thought he was sick with mononucleosis — commonly referred as mono — but were surprised to discover it was something more serious.

Later that week, his best friend at the college, freshman Jonah Restuccio of Oswego, N.Y., found out Levine had gone to the hospital where he was then diagnosed with acute lymphoblastic leukemia, a type of blood cancer.

Because of this diagnosis, Levine, a health and physical education major and former high school lacrosse player at Oswego High School, had to leave the college to begin treatment for his illness. Though Restuccio said Levine has been sad and in pain, Levine said he is optimistic and can push through the adversity with the support of his friends and family.

“I was angry and bummed out about the whole situation, and I knew deep down that going into this battle with a negative attitude could make the experience worse,” Levine said. “I believe that a positive attitude is essential to heal correctly.”

To help Levine and his family during this tough time, Restuccio and resident assistant Kris Bosela have brought together residents on his floor to come up with ideas to raise money to help cover Cooper’s treatment expenses.

Restuccio worked with Bosela and the National Residence Hall Honorary to host the kickball game and raise more money.

“We’re searching for outlets on how to raise money,” Bosela said. “We just want to raise awareness and give support and show Cooper that the IC community is going to be in support of him.”

Restuccio and others began selling T-shirts as part of the “#Pray4Coop” campaign, which is part of their efforts to raise awareness and money for Levine’s illness.

“We haven’t really been asking people for donations,” he said. “People have come up to us and asked if they can donate.”

Steve Altieri, third floor resident of Rowland Hall, has also been helping with T-shirt sales and described how much support the #Pray4Coop campaign has received.

“He knows people are supporting him,” Altieri said. “It’s amazing how when we went around selling T-shirts, how many people were willing to buy T-shirts to help support someone they didn’t even know.”

The NRHH supported the kickball tournament and also helped with the organizing and advertising of the campaign. Hannah Moger, president of the NRHH, said being a registered organization enabled the NRHH to reserve a field for the kickball game, submit tabling request forms and advertise on Facebook, Twitter, IC Link and Intercom.

“One of NRHH’s pillars is service, and we really emphasize serving our campus community,” Moger said. “Helping out with the more administrative aspects of this campaign has been a way we are able to serve and facilitate this kind of happening in our community.”

Not only did the event get support from clubs like the NRHH, but some Bomber athletes also participated in the kickball game this past weekend.

Among those who came out to support the cause were freshman football players Andrew Homkey and Andrew Tabbert. Homkey said he had a personal connection to the game on Saturday.

“My grandfather had cancer, so it helps out knowing that everybody’s putting in time to support a great cause,” Homkey said.

Bosela and Restuccio said they have raised about $230 through T-shirt sales and donations while promoting the tournament at a table in the Campus Center and at the kickball game itself.

“Seeing the people in the community rallying around a cause that is really important for us, even though they don’t really know Cooper that much or even at all personally, is a big thing for us,” Bosela said. “Just seeing people recognize that it is a really important.”

As of right now, Bosela along with his floor residents are trying to think of more ways to support Levine and raise awareness. Though Levine has not yet gotten approval from his doctor, he hopes to leave Oswego and return to the college next semester.

“I’m praying that I can come back because I’m missing IC like crazy,” Levine said.