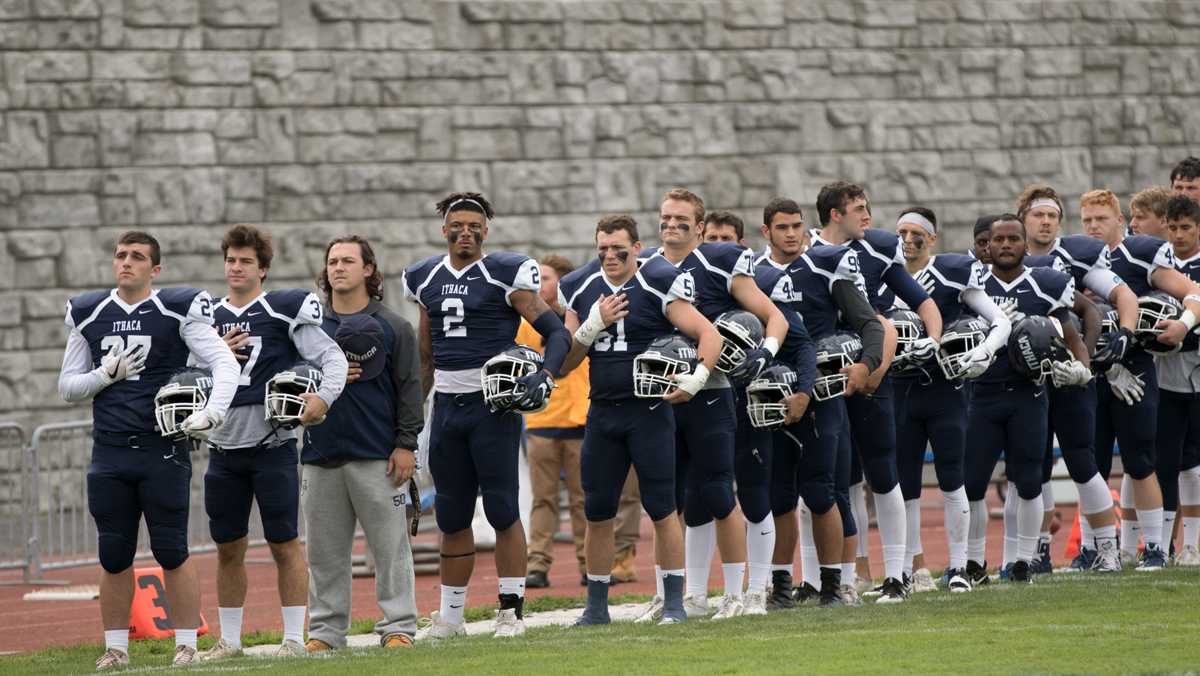 CAITIE IHRIG/THE ITHACAN
Sophomore wide receiver Will Gladney does not put his hand over his heart and holds his helmet during the national anthem on Sept. 30.
By Simon Rosenbluth — Contributing Writer
Published: October 4, 2017

Upon hearing President Donald Trump’s comments regarding NFL players protesting the national anthem, Will Gladney, sophomore wide receiver for Ithaca College, decided to form his own protest by refusing to put his hand on his heart during the anthem. Instead, he just stood there, fixing his right glove.

“There are a lot of things going on right now, and I just wanted to take time to show my respects,” Gladney said.

This issue has been claiming headlines around the world since Sept. 2016, as many prominent players in the NFL have been protesting police brutality and racial inequality during the national anthem. The movement, started by Colin Kaepernick, former San Francisco 49ers quarterback, has spread across the league and to other sports. Athletes are taking advantage of their platform to spread awareness of these issues that are plaguing people of color.

These protests became more vocal after Trump, at a rally in Huntsville, Alabama, criticized players that protested during the anthem. Trump went on to name-call and insult these players, referring to them as “sons of b——,” and advised NFL owners to fire those who protest during the anthem.

Trump’s comments sparked further participation among numerous players and NFL personnel. On Sept. 24, the first Sunday following Trump’s statements, over 200 players across the league kneeled, sat or raised a fist during the anthem. Several teams, including the Pittsburgh Steelers, Seattle Seahawks and Tennessee Titans chose to remain in their locker rooms during the anthem. The protests continued Oct. 1 as Cam Newton, quarterback of the Carolina Panthers, raised his fist during the anthem and most of the San Francisco 49ers kneeled.

During the 2016 season, the college’s senior running back Shawahl Abdur-Rahman protested by raising his fist during the game Oct. 1, 2016. Other college athletes are also joining the protests this season. Josh Adams, junior running back at the University of Notre Dame, did not put his hand over his heart during the national anthem.

Prior to the Bombers’ game Sept. 30, Gladney said that he alerted his teammates that he was going to display a sign of protest, and while they didn’t want to join him, they weren’t opposed to him doing so.

“As a team, we talked about it, and a lot of the guys told me if I wanted to do it, to go ahead and just be respectful,” Gladney said.

Senior wide receiver JR Zazzara said that this is a cause that needs to be noticed and that the most important thing is for each member of the team to watch out for their teammates and stand beside them.

“The great power of this country is that we don’t have that many rules when it comes to protest,” Zazzara said. “There’s a main concern that needs to be heard, and as long as people are staying to their point and respecting the First Amendment of being able to protest, then it should all be good.”

Football head coach Dan Swanstrom said that football players should use their platform for the causes they feel strongly about.

“Whatever my guys choose, I’ll stand by them, right next to them,” Swanstrom said.

It is yet to be seen whether more Bombers will show signs of protest during the national anthem. Gladney said he will most likely continue to protest in order to show support of the issues raised by players in the NFL.

While his fellow teammates might not join him, Zazzara said that they are going to be respectful of what Gladney is trying to do.

“We’re all Americans, we’re all here, we all have one life, and it’s about living that life to its fullest and peacefully and making it the best it can be,” Zazzara said.