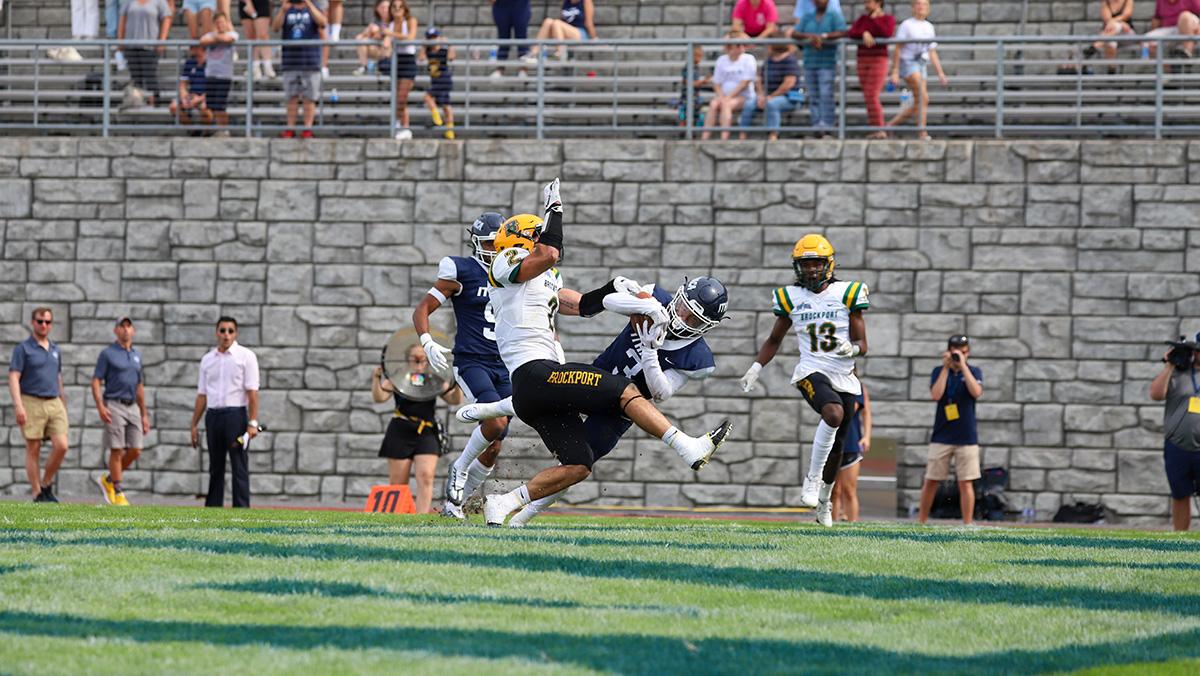 The No. 16 ranked Ithaca College football team defeated SUNY Brockport 24–0 Sept. 10 at Butterfield Stadium. The victory in the Bombers’ home opener improves the team’s record to 2–0 this season.

The South Hill squad was dominant on the defensive side of the ball, posting a shutout in their first home game. The defense forced a fumble and held the Golden Eagles to 5-for-18 on third down attempts. Senior linebacker Matt DeSimpliciis led the team with 12 tackles. 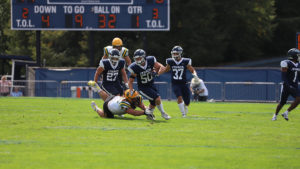 The Bombers’ offense had a productive afternoon, recording 181 passing yards and 62 rushing yards. Senior quarterback A.J. Wingfield accounted for 166 of the team’s passing yards, throwing three touchdowns in the process. The team received contributions from several players, as junior running back Jalen Leonard-Osbourne and senior wide receivers Michael Anderson and Julien Deumaga each caught passes in the endzone. The quarterback said he was impressed by how the team adapted offensively throughout the game.

“[SUNY Brockport plays] a lot of man coverage and [we’ve] got some really good receivers, and we were just attacking that,” Wingfield said. “Then they kind of switched on us and [offensive coordinator Sean Reeder and Mike Hatcher, associate head coach and special teams coordinator,] did a great job of adjusting and we just out-physicaled them.”

The Bombers got on the board on the first drive of the ballgame, taking a 3–0 lead over the Golden Eagles following a 23-yard field goal converison from senior kicker Nicholas Bahamonde with 10:02 remaining in the first quarter.

The South Hill squad quickly got the ball back, as DeSimpliciis recovered a fumble at Brockport’s 34-yard line. Wingfield then completed a 34-yard touchdown pass to Leonard-Osbourne in the right corner of the endzone. Bahamonde followed this by sending the extra point through the uprights to give the Bombers a 10–0 lead with 8:38 left in the quarter.

The Bombers continued their early offensive dominance with 4:35 to go in the first frame, extending their lead to 17–0 against the Golden Eagles. Wingfield recorded his second touchdown of the afternoon by throwing a two-yard touchdown pass to Deumaga in the right corner of the endzone. Bahamonde tacked on another point with a successful extra-point attempt. 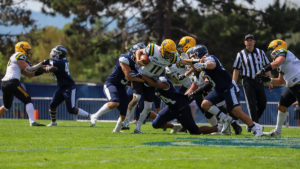 Head coach Michael Toerper said he felt the team’s early offensive surge set the tone for the rest of the game.

“[SUNY Brockport] is a team that you don’t want to play from behind against,” Toerper said. “They build a lot of momentum off keeping a lead and running the football. And for us to be able to jump out to that lead, it’s exactly what we wanted to do; we planned it all week to get out to an early lead. And, then it’s just protect the lead and we did a great job of protecting it.”

Neither team put points on the scoreboard in the second quarter, maintaining the South Hill squad’s lead as the game went to halftime. The Golden Eagles offense was stifled on multiple occasions by the South Hill squad behind a strong defensive effort.

The Golden Eagles faced third and three on the Bombers’ 26-yard line when DeSimpliciis and sophomore defensive lineman Owen O’Neill combined to sack Brockport’s senior quarterback Todd Simonds. SUNY Brockport then went for it on fourth and eight, but DeSimpliciis and senior defensive back Ben Stola got the ball back for the South Hill squad. The duo brought down Simonds after his four-yard rush was four yards short of the first down, with 5:18 left in the second quarter.

Later in the second, junior defensive lineman Michael Blanchard intercepted Simonds’ fourth and nine pass to end SUNY Brockport’s drive with 1:45 remaining. The Bombers’ offense took over at their own 44-yard line, but the team was ultimately kept off the board during the remainder of the half. The South Hill squad entered halftime with a 17–0 advantage.

The Bombers resumed the scoring with 5:17 to go in the third quarter, extending their lead to 24–0 over the Golden Eagles. Wingfield found Anderson in the middle of the endzone for a 20-yard touchdown pass. Bahamonde added another tally with an extra point.

This would hold as the final score, as neither team put points on the board during the remainder of the contest. Senior defensive back Antwan Robinson, one of the team’s captains, said he was pleased with how the team competed on both sides of the ball.

“We came out and we just did what we were supposed to do,” Robinson said. “I thought it was a full team effort from the first quarter all the way to the fourth. And, when you start strong and finish strong, you can’t be more proud.”

The victory provides Toerper with his first home win as the head coach of the program. The coach said he enjoyed returning to the sidelines on South Hill for the first time since 2019 when he was the Bombers’ defensive coordinator.

“It was really cool,” Toerper said. “[Butterfield Stadium is] just a special place, it’s a unique environment. … And then, just having my family here today was a special moment for me.”

The Bombers will return to the gridiron at 1 p.m. Sept. 17, as the team will host the Alfred University Saxons at Butterfield Stadium.