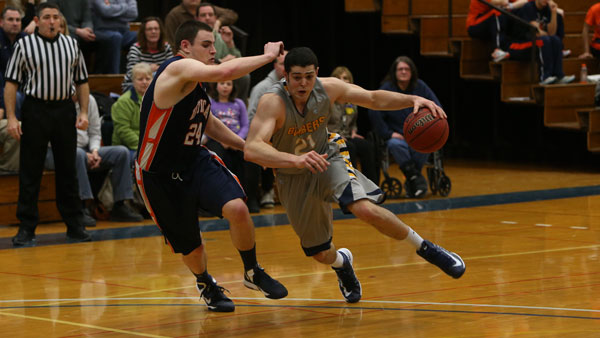 According to German law, Warech was eligible for citizenship through his grandmother, who was German-born but forced to leave the country during the Holocaust. He saw this as the best opportunity to play professional basketball, so Warech signed with German-based agency Scorers 1st Sportmanagement to help with the citizenship process and negotiate a professional team contract.

With his citizenship approved on Sept. 27, Warech will not count as an imported player. This status would make it feasible for every professional team in Germany to sign him, as he is not subject to the international player rules, which limit the number of imported players a team can have on its roster.

Warech’s agent, Gerritt Kersten-Thiele, is the CEO of Scorers 1st Sportmanagement. He said he has talked with teams in the top two tiers of the German basketball pyramid.

“We are now in talks with BBL and Pro A teams in Germany, and we look forward to making a decision soon on where Travis will be playing to start his pro career,” Kersten-Thiele said via email.

If no offers are made, he hopes to try out with potentially interested clubs, even though the German basketball season has already begun. Warech said he has been looking for a team since he began the citizenship process last July.

“I have heard a couple of instances where Gerritt told me about teams choosing between me and another guy, and they chose the other guy,” Warech said.

Warech said he is not worried about the current situation, as he is letting his agent handle the negotiations. He said he signed with Scorers 1st with the expectation that Kersten-Thiele would get him a deal, regardless of citizenship.

Bombers Head coach Jim Mullins said Warech has superb athleticism, and noted his exceptional play in the Bombers’ historic run to their first-ever Sweet 16 last season. He averaged 19 points and 10 rebounds, shooting 34 percent from 3-point range and playing about 34 minutes per game in the team’s five postseason games. After transferring to the college for his senior year, Warech’s one season with the Bombers produced a body of work that Mullen said was solid enough to stand with the program’s all-time greatest.

“Travis did things that have never been done at Ithaca College,” he said. “If you look at the last 10 or 12 games that he played here, including the NCAAs, you probably saw as good a player as any at Ithaca College.”

The international roster rules limited Warech’s options and dragged out the search process as teams lacked the roster spot for non-European Union players. Now that Warech has an EU passport, there are no rules preventing teams from trying to sign him.

Warech would not be the first of Mullins’ former players to play professionally overseas. Sean Burton ’09 was the most recent example, playing with Snaefell in Iceland from 2009–11 before returning to the U.S. to take an assistant coaching job at Utica College. Mullins said the playing level in Europe is among the best in the world.

“A lot of the players overseas are either deadly from behind the arc or are very quick,” Mullins said. “It isn’t for everybody. A lot of the leagues over there are really just a cut below the NBA. A lot of guys will go over and play with hopes of getting looked at by the NBA, and if it doesn’t work out for them, well some of them make a pretty darn good living out of it.”

The average rookie in the BBL makes about $60,000 a year. That figure drops to $36,000 in the Pro-A, a paltry sum compared to the minimum salary for a rookie in the NBA, which is just above $490,000. Warech said he intends to fly to Germany and work out for clubs that may be interested in signing him, if a deal cannot be arranged beforehand.

“I know with European basketball, getting there is the hard part,” Warech said. “Once you get your foot in the door and have a decent first season, then teams can take a chance on you for the second year.”