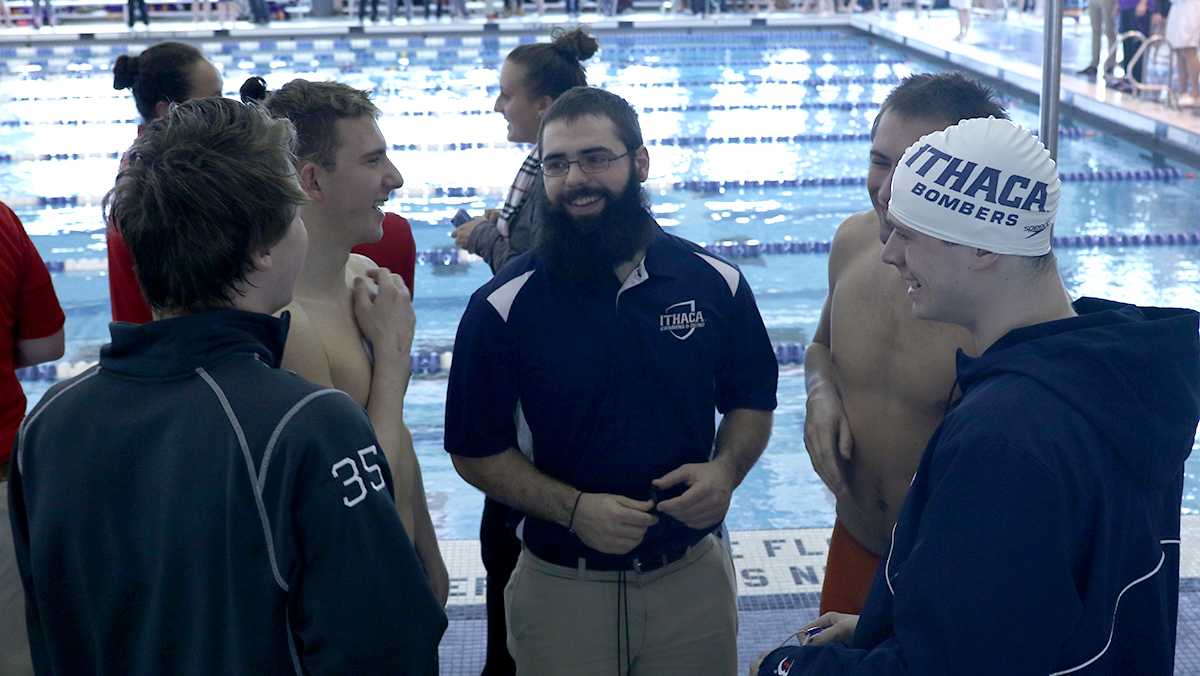 As the 2015 season wound down and Lucas Zelehowsky approached the end of his senior campaign with the men’s swimming and diving team, he had to think about what he was going to do with his future.

He was an exercise science major with the intent to coach, and through interviews with head coach Kevin Markwardt, he was hired as an assistant coach.

Zelehowsky helps out during practices and meets by drawing up practices and working with swimmers on their stroke. He also works closely as the team’s weight conditioning coach in the weight room every Monday, Wednesday and Friday morning from late August to the end of the season in late February and early March.

Markwardt said he remembered when he first began to talk to Zelehowsky when he was recruiting him as a swimmer.

“He was the kind of kid that initially it would’ve been hard to recruit him,” Markwardt said. “He was a pretty talented kid out of high school.”

Prior to attending Ithaca College, Zelehowsky swam Division I at Western Kentucky University before transferring following his sophomore year to the University of Louisville, where he stopped swimming for a time.

Markwardt said Zelehowsky’s undeniable passion for the sport separated him from other swimmers throughout his career with the Bombers.

“There are guys that swim, but it’s just something they do because they’re good at it,” Markwardt said. “He really loves swimming, so to me it was very apparent by the second year of coaching him.”

When it comes to coaching, Zelehowsky said he uses one specific coach, Dewey, as his role model.

“He’s a pretty stern coach,” Zelehowsky said. “He’s a very big stickler on form and precision and making sure everything’s up to a very, very high standard. … It helped me focus in on my swimming, and that’s what I like to do, especially at the DIII level.”

Zelehowsky said he tries to emulate Dewey’s style of coaching while at the same time incorporating some of his own philosophies.

“I’ve been told I’m a little ‘old school,’ but I don’t really buy that at all,” Zelehowsky said. “If anything, I see the value and the fun in hard work. It really does pay off. People who inherently understand that don’t need convincing.”

In addition to emphasizing enjoyment in their preparation, Zelehowsky said he inspires his swimmers to never let up their focus and intensity.

Dewey also said he always knew that someday Zelehowsky would hop out of the pool and onto the deck.

“Lucas was ever willing to help with our younger swimmers,” he said. “Lucas ended up being one of our club captains. It’s not surprising he’s coaching. … He knows his stuff and is personable enough to effectively impart that knowledge to others who are committed to being their best.”

For some, the change from teammate to coach may seem uncomfortable. They may think there will be a conflict of interest in having a close friend as their superior. However, senior Justin Barwick, who swam with Zelehowsky for two years, said that is not the case.

“Me, personally, I don’t think it’s been a weird change,” Barwick said. “I respected him as a teammate, and I respect him as a coach. It was definitely a beneficial change. Being a swimmer on the team, he knows the ins and outs of our training. He knows what makes us tick, how to push us and such.”

Zelehowsky also said the transition has been seamless thus far.

“I actually like it a lot. I’m a very personable guy to begin with, so I had a great connection with all the guys before this year happened,” Zelehowsky said. “So now that I’m their coach, they kind of saw me as an older guy starting out last year anyways, so the role just kind of filled itself.”

Zelehowsky said learning under the wing of Dewey inspired him to want to make sure all swimmers are being the best version of themselves.

“I like to see everybody improve. I want to help everyone achieve their goals, no matter what,” he said. “If kids want to come in here and work and push themselves to get better and faster, then that’s what I’m here for is to help them out.”