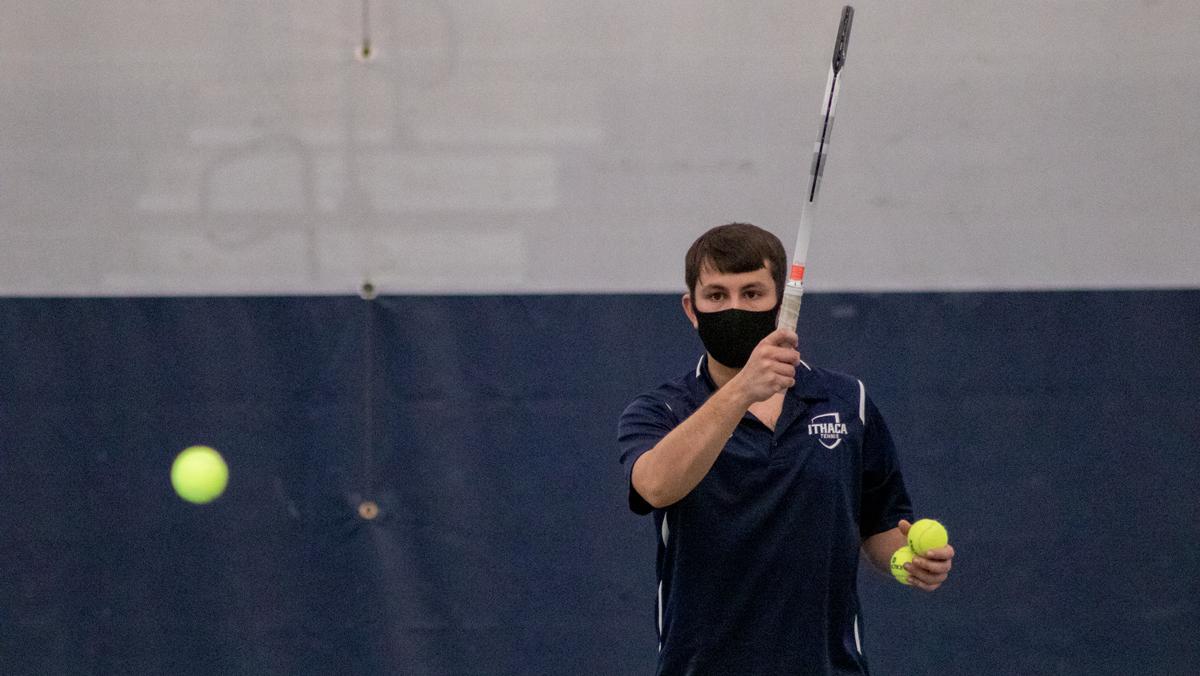 When the Ithaca College men’s and women’s tennis teams returned from their interrupted spring break trip last spring, former head coach Bill Austin decided to step away from the program after 20 years. Chris Hayes ’16, who played for and served as assistant coach with Austin, was promoted to fill the role shortly after.

Austin left his mark on the tennis teams during his two decades as head coach, etching his name into the record books with the most wins in the history of both the men’s and women’s tennis programs. Austin’s decision to retire also came as a surprise to Hayes, but he said he was fully supportive of his former coach’s decision to take a step back.

“I didn’t think he would retire,” Hayes said. “I thought, because of COVID-19, that would make him want to maybe do one more year. But I completely respect his decision. He has been doing this a long time. His family is extremely important to him, so I am happy he did what he wanted.”

Second-year graduate student Jane Alkhazov said this news was particularly difficult for athletes, as Austin made a large impact at the college.

“It was just a whirlwind of emotions,” Alkhazov said. “He cared so much, and I think it went beyond tennis. I think it was a really emotional and sad departure for Bill, but it was also really happy for Chris [Hayes].”

Hayes said he is humbled by the opportunity to take on the position of head coach. He said he does not know if or when another assistant coach will be added to his staff. During his playing years, he served as captain for the Bombers and is third in program history for singles matches won.

Hayes said he is grateful for the confidence Austin instilled in him to continue the tennis program’s success.

“It gave so much to me as a student-athlete, and I am on my way to give back,” Hayes said. “With this being my first head coaching experience, obviously there are a few nerves, but I think I am very prepared to take on this role and get our program into the future.”

“He’s developing as a head coach as we’re coming into the college tennis environment,” Villella said. “Just hitting with him has given me an idea of the level I need to get to, and just seeing him and the other players bring their best tennis to every practice inspires me and helps me see where I need to get to.”

Villella also said Hayes is dedicated to helping his players both on and off of the court. He regularly checks in with the athletes to ensure that they are able to balance tennis and academics amid the COVID-19 pandemic.

“We really care about our athletes,” Hayes said. “In terms of stepping into the role, I mean, that’s definitely been my goal, was to become a head coach. So, you couldn’t have asked for a weirder start to my first head coaching job.”

When the team returned to campus in early January for practices, Hayes gave his players a light workload. Over time, he has made practices longer and more challenging, but they have been able to fully assemble on weekends when class times are not an issue. As the spring season approaches, sophomore Tyler Purdy said his expectations this year are not different from last year, even with the change in head coach.

“Since Coach Hayes has been the assistant, he knows the team very well,” Purdy said. “I’m very confident going into this season with Coach Hayes. He did a great job recruiting. Our freshmen are very talented. I’m excited to watch everyone play again.”

Hayes said he also attempts to guide his players by gearing his instruction toward each individual athlete and is willing to adapt to each player to help them reach their full potential as both a player and person. Alkhazov said she appreciates the fact that Hayes is willing to work with athletes to help them succeed.

“He is very much individualized,” Alkhazov said. “He realizes that all players are not the same style, so he tries to tailor his coaching on and off the court to the person.”

Hayes said his primary goal this season is keeping everyone safe, and as long as they can do that, he believes the team can contend for a Liberty League championship and a NCAA Tournament bid.

“I consider myself a players’ coach,” Hayes said. “I might try to instill some things that they don’t buy. It might be a little different than years in the past. I might switch some things up there as well.”