Four Downs: Bombers football hopes to get back on the right track 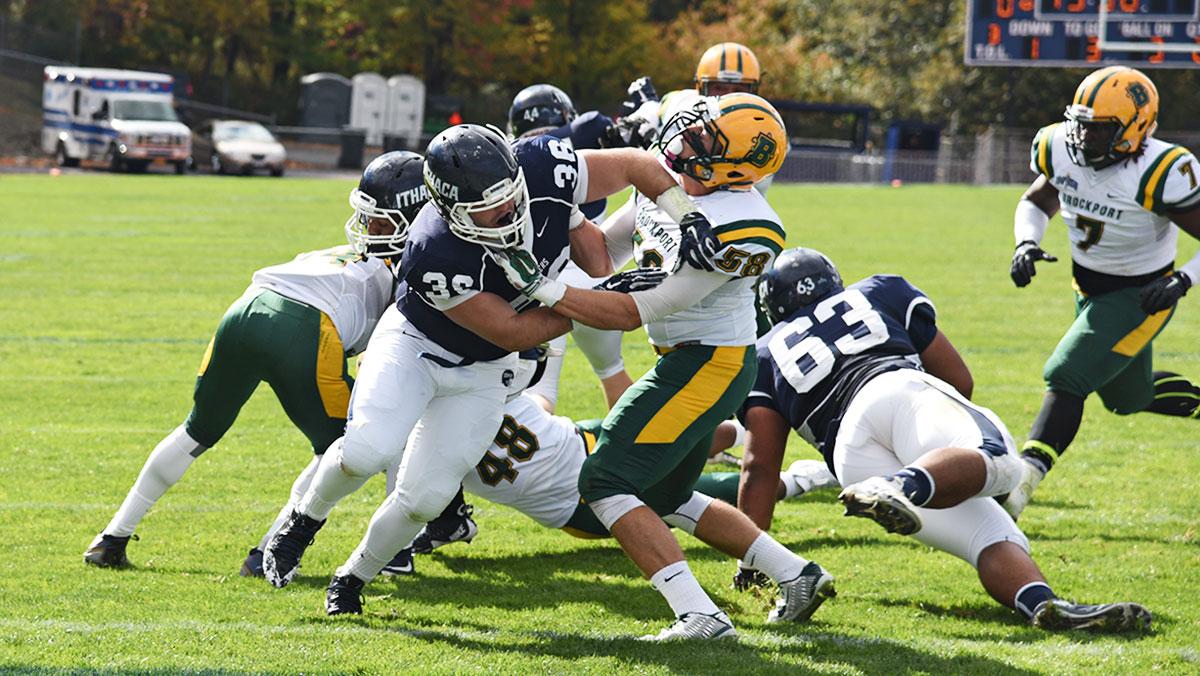 The Ithaca College football team looks to bounce back from a 24–12 loss to Morrisville State College on Oct. 24 as the Bombers return home to take on St. John Fisher College (4–3) at 1 p.m. Oct. 31 at Butterfield Stadium for Senior Day.

Who will get the nod?

Junior quarterback Wolfgang Shafer began the season with a couple of blowout wins in his first season as the Bombers starter. However, in his most recent outing against Morrisville, he was pulled in the middle of the third quarter.

Senior backup John D’Onofrio saw his first in-game action of the season against the Mustangs and looked impressive in the outing. He went 18–38 for 172 yards, two touchdowns and no interceptions. Of course, there were so many pass attempts, as the Bombers had to throw after trailing 24–0 early in the fourth quarter. As Senior Day approaches with D’Onofrio in the midst of his senior season, he might make his first career start.

What happened to the defense?

Prior to the matchup against the Mustangs, the Bombers defense was once ranked as high as fourth in all of Division III. Though the defensive front has been banged up in the past couple of weeks, the Bombers gave up close to 500 yards of total offense in the defeat. The Bombers allowed 267 rushing yards, which is over 100 more than the previous high allowed in 2015. They also gave up three rushing touchdowns and one passing touchdown.

The Mustangs had control of the ball for nearly 36 minutes and the defense was gassed, but it allowed for senior Malik Morris to set a personal career-high of 15 tackles, including a forced fumble.

In a season in which the defense has been the pulse of a young Bombers team, expect the Bombers to show up on Halloween against St. John Fisher.

Josh Oliver looks for another good performance after career game

There is no doubt that senior wide receiver Josh Oliver is one of the Bombers’ key ingredients to winning. Whether he is a returner, wide receiver or running back, he is the Bombers’ most dynamic player, as he can adapt to playing three different positions.

Coming off the disappointing loss, Oliver had a career-game. He had 16 catches for 134 yards and two touchdowns. It is the second time in the last four games that Oliver has found himself in the end zone twice. In fact, he set the college record for most receptions in a single game. He shattered the previous record of 13 set by Joe Palumbo over 20 years ago. Oliver’s performance gave him the second-most catches in a single game by any Division III player this year and earned Empire 8 Offensive Player of the Week.

In 2014, the Bombers took care of the Cardinals 19–8 in a sloppy game. In 2015, the Bombers will take a win any way they can get it and stop the bleeding over the past two games.

The game was tied at six going into halftime last year with a pair of field goals by senior kicker Max Rottenecker, including a career-long 50 yards. In the second half, the Bombers scored two touchdowns to give them the edge but allowed a rare safety in the third quarter.

However, this Bombers team looks much different than last year. Sure, the majority of the defense is returning starters, but the offense is the youth of the team. Whether or not Shafer gets the nod at quarterback, he needs to step up his game in order to lead his football team past a challenging Cardinals team. The Cardinals have the edge in terms of the Empire 8 standings with a conference record of 3–2 compared to the Bombers 2–3.

Though the past two weeks haven’t look as promising as the opening five, the Bombers still have much to play for as they sit just one game out of second place in the Empire 8 conference and welcome rival SUNY Cortland on Nov. 14 for a huge matchup.