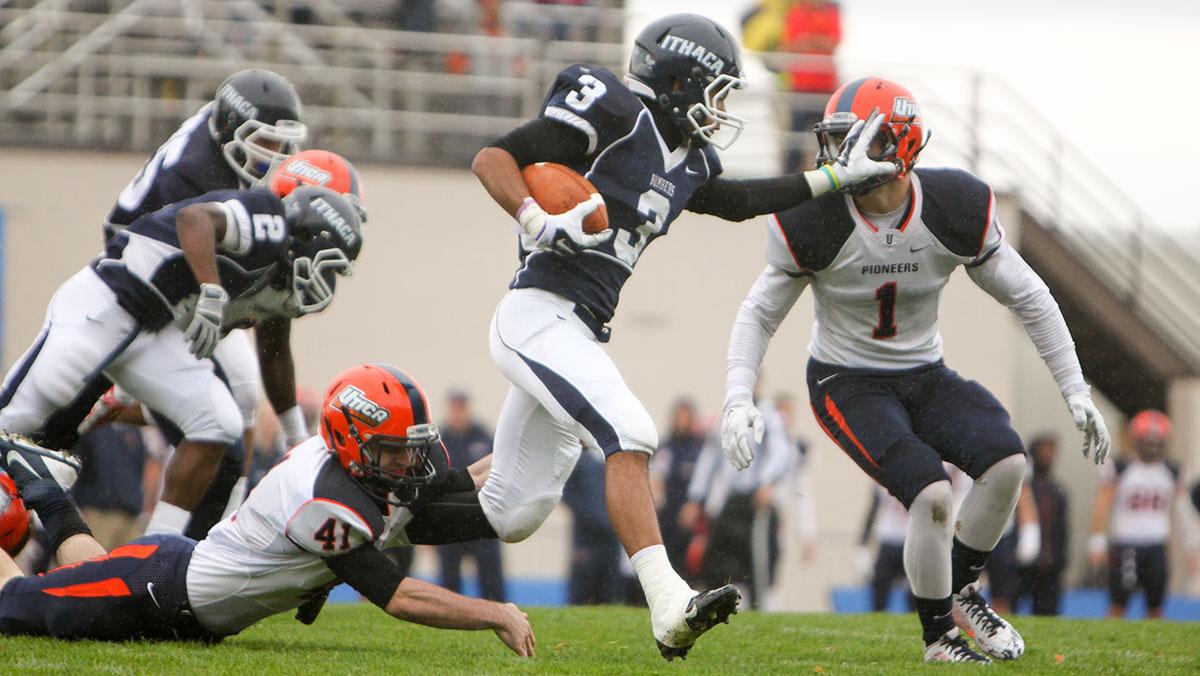 The Buffalo State Bengals have had modest success since joining the Empire 8 in 2012. They are 9–8 in conference games and have been a thorn in the side for the Bombers, defeating them in 2012 and coming within a minute of doing so again in 2013. In both games, the Bengals were the clear winners in the trenches, outrushing the Bombers in both meetings.

Besides the run game, the last two games had little in common. In 2012, the Bengals simply played better on offense, outgaining the Bombers by more than 100 yards and holding off a late Bomber rally to win 21–14. Last season, they almost beat the Bombers with a fourth-quarter rally in which they scored two touchdowns in 85 seconds before then-junior Vito Boffoli caught a 30-yard touchdown pass from Phil Neumann ’14 with 22 seconds remaining in the game. Because of the different identities to each game, it is tough to say why the Bengals have given the Bombers problems.

Battle of the Four First Names

Senior running back Rich Pete is the main reason why the Bengals have outrushed the Bombers in each of the past two meetings. Though he only has 25 carries combined in the two meetings, he’s rushed for 140 yards, which is a solid 5.6 yards per carry against what has been a stout Bombers rush defense. This season, Pete has averaged 6 yards per carry and has become the focal point of this offense, as he is 33 carries and 119 yards away from career highs in attempts and rushing yards halfway through the season.

While Pete has emerged as the focal point of the Bengals’ offense, Kenneth Bradley, Bomber freshman middle linebacker, has established himself as a run-stopping presence. Bradley was the Empire 8 Defensive Player of the Week two weeks ago, when he recorded nine solo tackles against Alfred University on Sept. 27. With the Bengals primarily running their rushing plays out of the shotgun and the pistol formations, the number of defensive players inside the box gets reduced as the Bombers will have to spread out their formation to cover the Bengals’ offensive players. This forces either Bradley or senior linebacker Marc Recio into situations where he will havethe first opportunity on the play to stop Pete. Bradley said Recio has been a mentor on the field for him.

The Bombers will be without junior defensive lineman Logan Murphy for Saturday’s game after Murphy left last week’s game against Utica College with a right knee injury. According to two different sources, Murphy’s injury is both one that he has suffered before and not as severe as it first appeared. Head coach Mike Welch said Murphy was “day-to-day.”

With Murphy out, junior Schnayder Termidor and sophomore Andrew Homkey will see more time at defensive end, especially if the Bombers need to rush the quarterback more. If the Bombers need more of an inside presence, they can move senior Joe Ricotta to defensive tackle and play junior Tijah Henderson at nose guard.

Cardinals On the Brink, Sea Gulls On the Rise

St. John Fisher College (3–1, 2–1) was 18 seconds away from recording its first win in program history against Salisbury University (2–2, 1–1). Now, it is lamenting its fourth-consecutive and final Empire-8 loss to the Sea Gulls. While the Cardinals made the playoffs last season with two losses, one of those losses came against the conference-champion Bombers, and the Cardinals had a strong out-of-conference schedule, featuring a win against fellow playoff participant Washington and Jefferson College. This season, their non-conference opponents, Otterbein University and Alfred State College, are not playoff contenders, so a second loss this year would put the Cardinals in a far more precarious place than a second loss put them in last year. They host the Hartwick College Hawks (2–2, 1–1) this Saturday and should rebound with a win against a Hawks defense that has allowed more than 38 points per game.

The Sea Gulls are now back at .500 and are somewhat difficult to get a gauge on. Junior quarterback John Dunbar has a solid plurality on the share of the carries in the option offense they run. Last week, he rushed for 136 yards on 30 carries, three times as many carries as any other player. When he has rushed for more than 100 yards, the Sea Gulls have won. When he has not, they have lost. This week, Dunbar and the Sea Gulls host the Utica College Pioneers (4–1, 2–1), who have only given up 3.1 yards per carry so far this season. The loser of that game would have its second-conference loss and face a steep climb to save its season.