Four Downs: The battle of the 3–0 teams 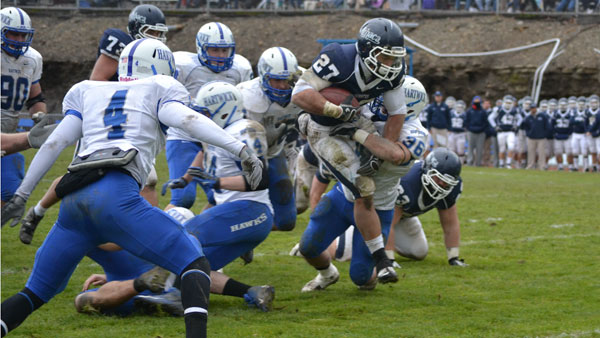 The Bombers haven’t lost to the Hawks since 2007, and it’s not a surprising trend. Since the Hawks are 11–25 in the Empire 8, and with 14 consecutive conference games, they are a unanimous pick to finish last in the conference. The Hawks are undefeated this season, but their schedule has been soft. The three teams they defeated were a combined 6–24 last season.

The Blue and Gold are 3–0 for the third time in four seasons. They will look to go 4–0 for the second consecutive season. The Bombers have played better competition as their first three opponents, Moravian College, Union College and Buffalo State, were a combined 14–16 last season.

Though Clay Ardoin ’13 rushed for almost 1,100 yards last season, the South Hill squad’s rushing attack is last in Empire 8 for team rushing, averaging 3.4 yards per game last year. The rushing attack remains questionable, as senior Rakim Jones has not been able to build off the strong performance he had against Moravian on Sept. 7 when he rushed for 132 yards on 28 carries. In the two games after playing the Greyhounds, Jones has rushed for only 80 yards on 32 carries. Junior Tommy Padula saw more time in the second half of last week’s game, and he may see more carries this week. Padula said he has fully recovered from a shoulder injury, which made him miss the season opener.

“[My shoulder is] 100 percent now,” Padula said. “The last two games have been a test for it because the first game I had to sit out, and it was a challenge to watch the team. Now I don’t feel it any more on Saturdays. It’s not a problem.”

Based on last season’s struggles, it is hard to believe that the Bombers are a perfect 10 for 10 in the Red Zone this season. They are one of only 18 teams in Division III to have an unblemished record in the Red Zone. Kickers junior Garrett Nicholson and sophomore Max Rottenecker have helped contribute to the success, converting five field goals. Jones and senior quarterback Phil Neumann have also contributed to the Bombers’ success. All three of Jones’ rushing touchdowns came in the red zone, and Neumann is three for eight with two touchdowns and no turnovers. Offensive coordinator Ryan Heasley credited the kicking game for helping the Bombers record points every time they go deep in their opponent’s territory. He said the offense is showing signs of encouragement.

“When you watch the first three games we’ve played in, we’re very close,” Heasley said. “It’s nothing big, but in offensive football you need to have 11 people doing the right thing all the time. One little misstep here or there slows you down.”

Full-conference play begins as Utica College hosts Salisbury University in the standout game of this weekend’s slate. The Pioneers (2–1) have a reason to be optimistic after being competitive throughout their loss to No. 7-ranked Hobart College two weeks ago. The Salisbury Sea Gulls (1–2) fell out of the top 25 in the D3football.com rankings after a week-one loss to Christopher Newport University and have struggled to incorporate a new quarterback. This hurts Salisbury’s triple-option offense, as the Sea Gulls are averaging only 180 rushing yards per game, down from the 273 yards they averaged last year.

For comprehensive coverage of the game Saturday, follow @ithacansports and @Christian_Araos beginning at 2 p.m.