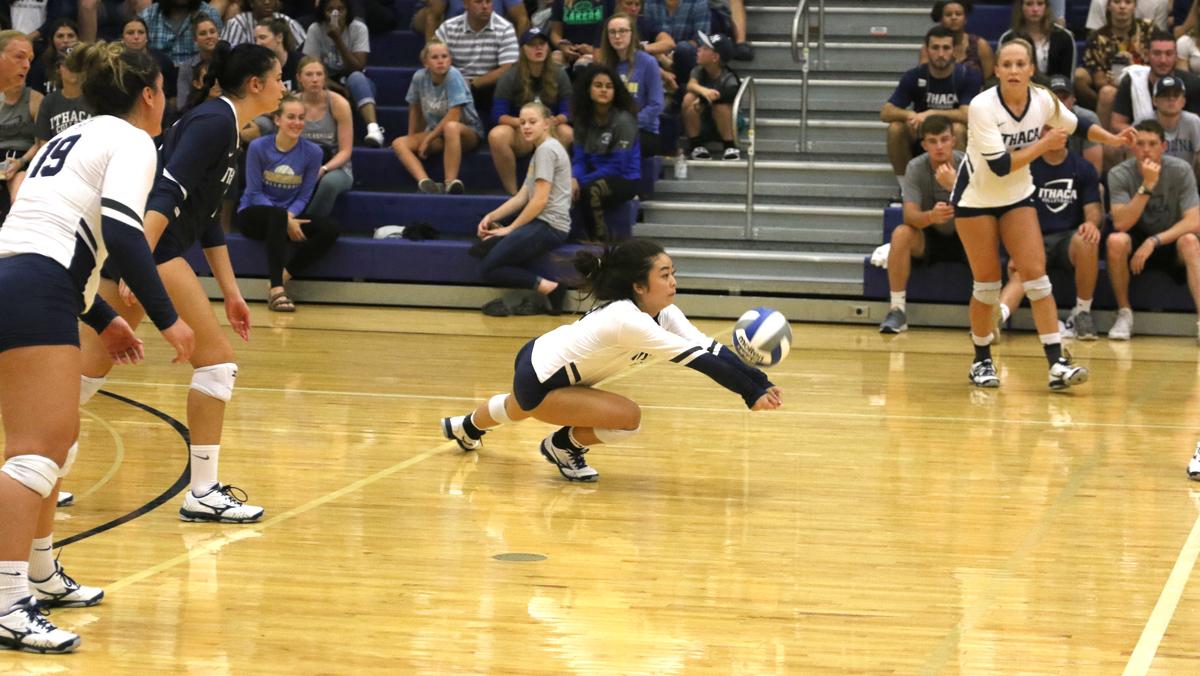 ELIAS OLSEN/THE ITHACAN
Freshman libero Jordyn Lyn Hayashi digs the ball during the Blue and Gold’s loss against Calvin College on Aug. 31. Hayashi has played in all 23 games for the Bombers this season.
By Shehanee Fernando — Staff Writer
Published: October 23, 2018

Freshman athletes typically struggle to find playing time given their lack of seniority. However, for freshman libero Jordyn Lyn Hayashi, her limited experience at the collegiate level has not stopped her from being a consistent starter on the Ithaca College women’s volleyball team.

Hayashi has played in all 23 games so far this season and has recorded 171 digs and 18 assists. She played volleyball in her home state of Hawaii for eight years, starting in the fifth grade, continuing through middle school and high school and now at college.

Hayashi visited the college last year and said she was instantly struck by the beauty of the campus. She also met head coach Johan Dulfer on the trip, and soon after everything fit into her college plan. Dulfer said he is pleased that Hayashi joined the program.

“Jordyn is the perfect fit for Ithaca and for our team,” Dulfer said. “She is adventurous, driven, just a very good person and teammate. What impresses me the most is how incredibly unassuming she is for someone so talented. She has lofty academic goals, and she dreams big for volleyball, too.”

While freshmen starting so soon into their college careers is uncommon, Dulfer said, Jordyn’s attitude is why she broke tradition.

“Jordyn’s strength is her intensity,” Dulfer said. “She has incredible drive to get to every ball. She also possesses an amazing feel for her platform, which allows her to pass very tough serves right to target. I don’t look at what year someone is when we determine who needs to be on the court. Jordyn is having to earn her spot each day in practice and games, and she’s done a tremendous job.

Hayashi said she feels gracious to be playing with talented teammates and having supportive coaches who push her to the best of her abilities. Though the games at the collegiate level move at a faster pace and require more consistency, Hayashi said, she feels challenged every game.

“I watched the University of Hawaii at Manoa’s volleyball team on TV all the time with my mom,” Hayashi said. “I would copy their movements, so my mom just stuck me into a volleyball program.”

As a libero — a defensive position on the court — Hayashi is skilled at digging and passing. Senior libero Tara Stilwell said those two skills are what makes Hayashi stand out in the game.

“It is the libero’s job to be consistent in starting the play off well,” Stilwell said. “The libero is critical to the game because of that and because it is hard to be a good offensive team when the passing isn’t good.”

When Hayashi first started playing volleyball, she played all of the spots around the court. However, as she advanced further within the sport, she was guided towards being a libero.

“I think I like the glory of it,” Hayashi said. “When your opponent could hit the ball as hard as they could, the fact that I am able to dig the ball and prevent them from killing the ball is just an amazing feeling for me.”

As a freshman in high school, Hayashi received an honorable mention in the Big Island Interscholastic Federation (BIIF) Division I. As a sophomore, she helped her team win the BIIF Division I Championship. The team also finished in sixth place at the Hawaii High School Athletic Association (HHSAA) Division I Championship. Furthermore, as a sophomore, she was invited to take part in the USA Volleyball High Performance Region Prospects National Training Program.

“When they asked me, I felt like all of my hard work on and off of the court was getting noticed,” Hayashi said. “I was so happy and honored to go to the USAV training program and represent Hawaii.”

One teammate who has been instrumental in helping Hayashi integrate to the campus is Stilwell — the two share a bond of being the only liberos on the team.

“I need her support,” Hayashi said. “Tara and I are in the back row together, so she is so supportive when I mess up on a pass or dig — she is there to pick me up. She makes sure my head is still in the game. She is such a great teammate.”

Stilwell, who transferred to the college her sophomore year, has been a top player for the entirety of her career with the Bombers said she is impressed with how Stilwell is performing.

“It’s almost as if we’ve been playing together for years,” Stilwell said. “I trust her in the back row, and I know that we work well together and that we can grow together. Jordyn is just a bubble of energy. She brings this sort of tenacity and perseverance that good athletes like her have.”

Hayashi is barely into her freshman season for the Bombers, and Dulfer said she has already made a strong first impression among her teammates and coaches.

“It’s hard to find a day where there’s not a smile on her face,” Dulfer said. “Jordyn brings to the program a constant reminder of how important it is to dream big and chase your dreams. We are so lucky she chose to come to Ithaca College and is part of a really talented first-year class.”