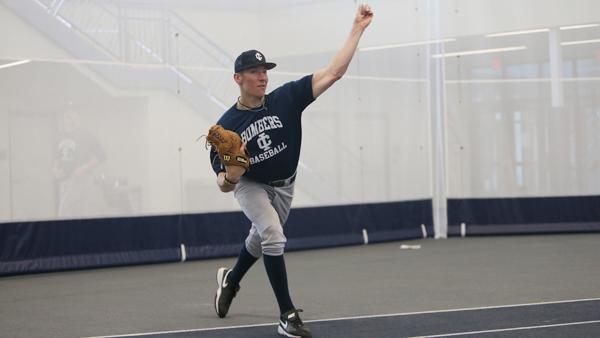 Zach Pidgeon toes the pitching rubber with the metal tip of his cleat. Inhaling, he checks to make sure the runner on first base is not about to steal. As he turns back to face his current batter, he focuses his attention on the catcher’s mitt, which is centered over home plate. He calmly brings the ball into his own glove, adjusting his grip to throw a fastball. With a kick of his leg, Pidgeon’s arm snaps forward and delivers the ball in a white blur. With a whoosh of his bat, the hitter makes contact with nothing but air. Receiving the ball back from his catcher, Pidgeon readies himself for another pitch.

Pidgeon looks comfortable on the mound, as if he has been pitching for years. But until this year, Pidgeon was on the receiving end of the pitch instead of the delivering one. He had been a catcher for his entire baseball career, but upon entering the Ithaca College Baseball program in the fall, he made the choice to convert to pitching.

Pidgeon had been a catcher since his Little League days, enjoying great success at the position. He earned second team all-state honors while contributing to a Class B State Championship in high school.

There was just one thing holding Pidgeon back from continuing his catching career at the college level.

Because most batters are right-handed, left-handed catchers have a more difficult time throwing out runners. The right-handed batter obstructs the throwing path for a lefty to both second and third base. Therefore, when attempting to throw a runner out, left-handed catchers must move to the side to avoid the batter. This slows them down considerably and reduces the chance the throw will catch the runner.

Because of this, Head Coach George Valesente told Pidgeon at the beginning of the year that it would be very difficult, if not impossible, to play baseball after college as a left-handed catcher. Valesente said he saw Pidgeon’s strong arm and decided he would give him the option to pitch.

Valesente said by offering to work with Pidgeon on his pitching, he was thinking about not only the betterment of his team but also about Pidgeon’s baseball career following his four years in college.

“I told him that I didn’t think he shouldn’t be a catcher, but I was thinking about the future, three or four years down the road,” Valesente said. “[Left-handed pitchers] are in high demand, and with that in mind, he seems to have accepted it very well, and he’s making progress.”

Pidgeon said after he heard that, the choice was an easy one to make.

“The ultimate goal is to play in the major leagues,” Pidgeon said. “I thought, ‘What’s the point in playing if you can’t get looks at the next level?’”

According to Pidgeon, changing positions has been a difficult transition for him, especially so late in his career. He has had to change his arm angle, form and release point. He also said it was very challenging to learn how to throw a curveball.

“Coach Val had to change my entire throwing motion,” Pidgeon said. “It’s been a very different and new experience.”

Despite the entirely different nature of pitching, Pidgeon said his catching experience has helped him become a better pitcher. Senior catcher Corey Caswell said Pidgeon has retained the thought process of a catcher even as a pitcher, which has made the transition easier.

“He has a catcher’s mentality on the pitcher’s mound, which has been great for him because he knows what to expect in certain situations,” Caswell said.

Caswell said because Pidgeon has so much experience behind the plate, he knows what pitches to throw to different batters.

As for Pidgeon, he said he likes pitching even more than he did catching. Pitching has given him an opportunity to play baseball after college, which for him is worth changing positions for.

“I just wish I had pitched in high school so that I would have more experience now,” Pidgeon said.

Though Pidgeon had never played the position before last fall, he has already pitched in two games for the Bombers this season. In two innings of relief appearance, Pidgeon has faced eight batters, striking out one and only allowing one earned run.

Caswell said Pidgeon has everything that it takes to be a successful pitcher. He said Pidgeon overcame a difficult challenge that turned him into a better player.

“He has a gift,” Caswell said. “He has the arm, he has the stuff, now he just has to put it all together.”