Freshman pitcher overcomes cancer and returns to the mound 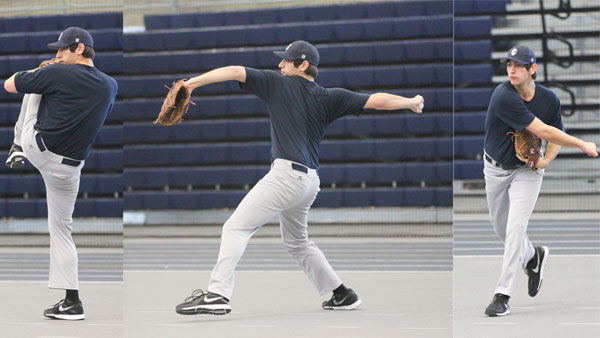 But for one of the baseball team’s freshman pitchers, Logan Barer, numbers tell an entirely different story.

Barer was diagnosed with Stage III melanoma when he was 9 years old, and numbers told him that over the course of the next year, he would undergo multiple surgeries and receive more than 150 injections in order to treat the cancer.

However, there is also a part of Barer’s story that can’t be told by numbers. They can’t calculate Barer’s undying passion for baseball. They can’t tell the story of the kid who wanted to be a pitcher so badly that he tried to pitch in a T-ball game. Most importantly, numbers can’t predict that 10 years after his original diagnosis, Barer would be pitching for the No. 6–ranked Division III baseball team in the country.

“I was always playing baseball,” he said. “There’s something about being up there on the mound. There’s nothing in this world that I love more than baseball.”

It was, in fact, during a basketball game 10 years ago that Barer discovered a small bump on his knee. Assuming it was a wart, Barer said, he didn’t think much of it.

“I didn’t want the girls to see it or anything,” he said jokingly. “I put a band-aid over it while I was playing.”

When the bump did not disappear, Barer went to the dermatologist, who told him that he had cancer. The melanoma, which is considered the deadliest skin cancer, had spread to Barer’s thighs, and because the cancer had spread to other parts of the body, Barer was diagnosed with Stage III cancer. Soon after, Barer had a series of surgeries to remove lymph nodes in the affected areas. The operations were deemed successful, and Barer began his road to recovery.

After his surgeries, Barer was hospitalized for about a week and knew he would not be able to play Little League that season. However, he still found a way to stay connected with baseball. Barer was his team’s honorary first-base coach that season and once got to throw out the first pitch for the Bridgeport Bluefish, a professional baseball team independent of Major League Baseball.

“They wanted me to throw it from two-thirds of the way to home plate,” Barer said. “But I said, ‘Screw that,’ and went out to the pitcher’s mound and threw a one-hopper in there.”

After recovering from his surgeries, Barer spent time re-strengthening his knee and thighs. His long rehabilitation process caused him to miss another season of Little League. Additionally, Barer visited the hospital once every two days for routine CAT scans, then once a week, then once every two weeks. With every successful visit, Barer visited the hospital less frequently.

“The [increments of time] keep growing forever,” he said. “But I haven’t been back in over a year.”

After two years of sitting on the sidelines, Barer began to pitch again. During high school, he pitched for Suffield Academy in Suffield, Conn., and was recruited to play at Ithaca College.

The baseball team’s head coach, George Valesente, said he was impressed with Barer’s size and movement on his fastball. The 6-foot-4 right hander also throws a slider and a curveball, and Barer is in the process of improving his changeup.

Valesente also said Barer frequently works on his pitching outside of practice, which attests to his work ethic.

“He will go into the bullpen quite a bit to throw on his own [in addition to the team’s daily practice],” he said. “He really works at his game.”

“You wouldn’t think that he’s a freshman,” Jasukonis said. “I’ve been really impressed with the way he has been throwing. I’ve been talking to a lot of our hitters, and they are all very impressed with him too.”

Jasukonis said the movement on Barer’s fastball, as well as his ability to spot up, will help him to become a strong contributor as a freshman.

Though Barer will begin the season pitching out of the bullpen, Valesente said he will still have a chance to make contributions to the team as a reliever. Barer said his goal is to make an impact on the team as a freshman, no matter where Valesente chooses to play him.

Barer said cancer taught him to appreciate the people who go out of their way to help him, a lesson he has applied to both his baseball career and his character as a teammate.

“When I was in the hospital, my rabbi came and played Nintendo with me,” Barer said. “My fourth-grade teacher brought me homemade lasagna. From that, I’ve learned how important it is, cancer or not, to have someone who will go out of their way just to make you smile. So I just do my best to make people happy whenever I can. A little thing can make a difference.”

Barer said he has applied this mindset to baseball, and it has taught him to have fun with the game, even when it is not going his way.

“I love the game,” Barer said. “I love laughing in the dugout, not too much though because then [Valesente] will get mad. But really, I just love having fun with the game, because that’s what it’s about.”

Jasukonis said he has also noticed that even though Barer enjoys playing baseball, he also has a competitive edge that will help him become a leader once he gains experience.

“He’s not cocky, but when he gets out on the mound, he’s got this fire in him,” Jasukonis said. “He’s a competitor.”