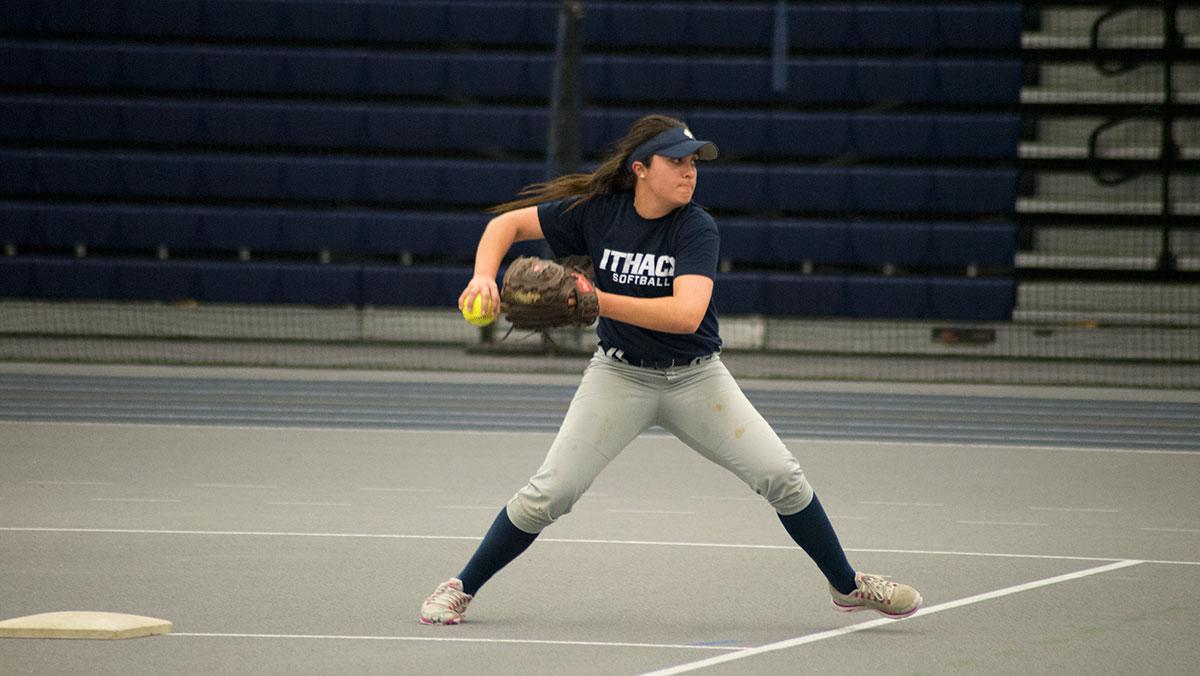 As the top of the third inning began, freshman second baseman Allie Colleran stepped up to the plate and dug her feet into the batters box — the familiar rectangle of white chalk surrounding her — in hopes of contributing to the Bombers’ 2–1 lead over the University of La Verne on March 9 in Southern California. Despite grounding out during her first college at bat, Colleran did not let the pressure faze her.

She was hitting in the No. 2 spot of the lineup, and her nerves were almost nonexistent as her teammates cheered from the dugout. Soon enough, Colleran sent a single down the right field line and shortly scored on a sacrifice fly by junior outfielder Erin McQuillan. As she crossed the plate, she felt a sense of relief and excitement.

Colleran said having support from her teammates throughout the game helped her thrive in her first appearance for the Bombers.

“Obviously it was my first college game, but it was just nice to know that a bunch of my teammates reached out to me,” Colleran said. “Knowing my teammates had my back made it so much easier, and going through that first game was so fun.”

The South Hill squad came out of the contest with a 4–2 victory, with Colleran leading the offense, collecting two hits in her first four at bats for the Blue and Gold.

The freshman from Concord, Massachusetts, has stepped up in a big way for the mostly veteran team this season, filling the big shoes of former second baseman Julianne Vincent ’14, who along with senior shortstop and captain Francesca Busa, was the only other Bomber to play all 40 games last season.

Originally a shortstop from Concord Carlisle High School and a second baseman for her club team for three summers, Colleran has had to make some adjustments with the permanent transition to the right side of the diamond.

Although the transition was difficult, Colleran was able to establish herself on the spring break trip more than the Bombers originally expected after sophomore second baseman Kate Brainard suffered a concussion while in California. Sophomore outfielder Jessie Fleck said Colleran took advantage of her playing time and proved she has the potential to fill the void left by Vincent.

“She had big shoes to fill with Julianne gone because Julianne was a huge senior, a huge asset to our team, and she’s really filling her shoes well,” Fleck said. “Everyone still has work to do, but she’s in a really good place.”

Knowing what kind of impact Vincent, who hit .325 in her last season, made for the Bombers is something Colleran said pushes her to be even better, and she credited much of her success so far this season to the support of her teammates. In particular, Colleran said as a middle infielder, Busa has been a big help in her transition to college softball.

Head coach Deb Pallozzi echoed this sentiment and said from the beginning of the season, Busa had taken Colleran under her wing and helped with the adjustment.

“Francesca’s our most instinctive player on the team, and so she’s teaching Allie not only the particulars of the footwork and stuff but also just how to read the game as it plays out, so she does an excellent job with that,” Pallozzi said. “I think after playing the games in California and figuring out the pace of the game, Allie has got it figured out a little bit.”

With a majority of the season still ahead, Colleran said she looks forward to improving her game and learning more from the veteran players.

“No matter what it is, I feel like I’m always hustling and trying my hardest,” Colleran said. “Also, being one of the younger kids and having a whole entire team of upperclassmen, they also push me to try to be the best that I can be because when I see them working really hard, I want to be just as good and be there for them.”