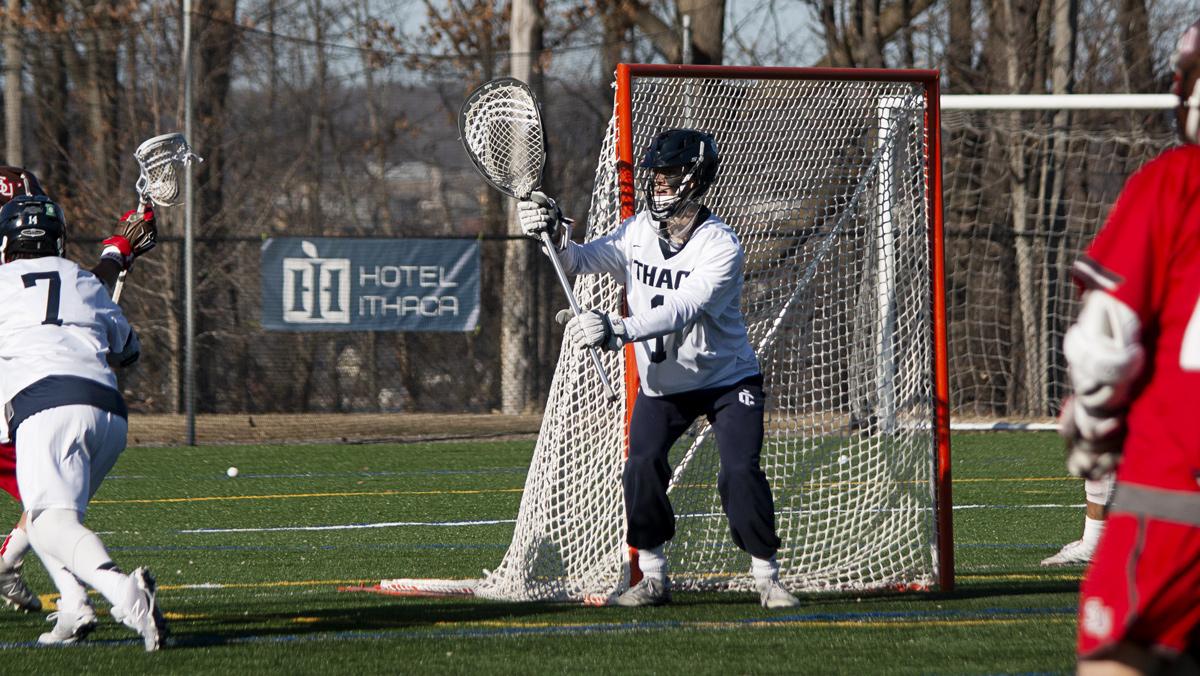 When freshman Connor Thornton visited Ithaca College for the first time, he immediately felt a sense of belonging.

In reality, he was nearly 1,700 miles from his hometown of Boulder, Colorado. The similarities between downtown Ithaca and Boulder were comforting and allowed Thornton to fit into the environment easily. Luckily, Thornton said he transitioned seamlessly to the college and has had the same “meant to be” experience on the men’s lacrosse team as well.

The freshman goalie has started in each of the Bomber’s games this season, and he has played the entire length of eight out of the team’s 10 matchups so far. Thornton has recorded a total of 94 saves so far this season and secured a season-high of 17 saves in an 11–9 win over SUNY Geneseo on March 3.

Thornton attended Boulder High School and was a four-year starting goalie for the Panthers. He also was a two-time All-Conference First Team honoree and a two-time Boulder County Preps All-Region honoree, both in his junior and senior years of high school. He was also named as a 2016 Under Armour Underclass All-American.

Following high school lacrosse, Thornton immediately made a significant impact on the men’s team at the college, though he said he didn’t envision fitting into the starting lineup so quickly. In fact, he said he didn’t expect to play at all as a freshman. The last time a freshman started regularly for the squad was in 2013.

“Our junior goalie, Robby Atwood, successfully carried us into the Sweet 16 last season, so I was kind of ready to just be a backup,” Thornton said. “Obviously, I was working really hard to start because it’s what I’ve always wanted to do.”

Atwood started every game for the Bombers in 2018. He was a strong performer for the squad all season and was recognized April 2, 2018, as Liberty League Defensive Performer of the Week. Atwood’s statistics from last season are currently better than Thornton’s in every category. However, Atwood believes that the constant competition for the starting spot has made both athletes stronger.

“Goalie competitiveness has made us each individually better,” Atwood said. “Our team has also benefited in a shooting sense since we see a lot more shots during practice than years past.”


Though there was a transition for each of the goalies in the position from last season to this current one, Atwood still holds a significant leadership role for the Bombers.

“My leadership has transitioned into a more vocal role,” Atwood said. “I am still able to see the offenses that teams are in and can communicate to the defense what needs to happen.”

Thornton has been crucial to the Bombers throughout the season. On March 27, the Bombers defeated St. Lawrence University in an exciting double-overtime game, and Thornton had an impressive performance under pressure. With seven seconds remaining in the fourth quarter, he made a crucial save that sent the game into overtime. He finished with an outstanding 12 saves.

Among the adversity, Thornton has continued to hold his ground with the help of his teammates. Thornton said that listening to the other leaders on his team has taught him the most about leadership thus far, and though it is still a constant work in progress, he feels that listening has guided him through finding the balance of stepping up as a leader but also being a freshman player. He credits his success and contribution to the team to his work ethic.

“I’ve always had a dream of going to college and being as great as I can be,” Thornton said. “I work really hard so that one day when I’m old and looking back on it, I can really say I gave it my all.”

Junior defenseman Aaron McCartney confirmed that Thornton’s ability gives the defense the confidence to play efficiently and successfully. Additionally, he said his work ethic translates to the rest of the players and benefits the team as a whole every day.

“Everyone knows that he’s one of the hardest working players on the team,” McCartney said. “I think all the upperclassmen gained a lot of respect for him early on when we saw how hardworking he was.”

Thornton’s ability to make hard saves under pressure has carried the team through a few of its most challenging games this season. Similarly to his performance in the final seconds against St. Lawrence, Thornton was crucial to the Bomber’s one-goal victory over Vassar College on March 30. Thornton came through with an outstanding save and cleared a clean transition that translated into the game-winning goal for the day.

Thornton said the community and strong bond of the team drive him toward his goals. He said the past success before moving into the Liberty League in 2018 — the Bombers earned three titles in the Empire 8 and had a winning record in the league all 14 years that they participated — motivates him to perform at the level of those who came before him. Additionally, two coaches and 12 Ithaca athletes within the lacrosse program are members of the Ithaca College Athletic Hall of Fame. Thornton said a Liberty League championship and a run for a national championship trophy are both on the his radar.

Thornton considers his biggest assets to be his communication and athleticism. Head men’s lacrosse coach Jeff Long agreed and added that his quick hands give him the knack to make a save. He is optimistic about Thornton’s potential.