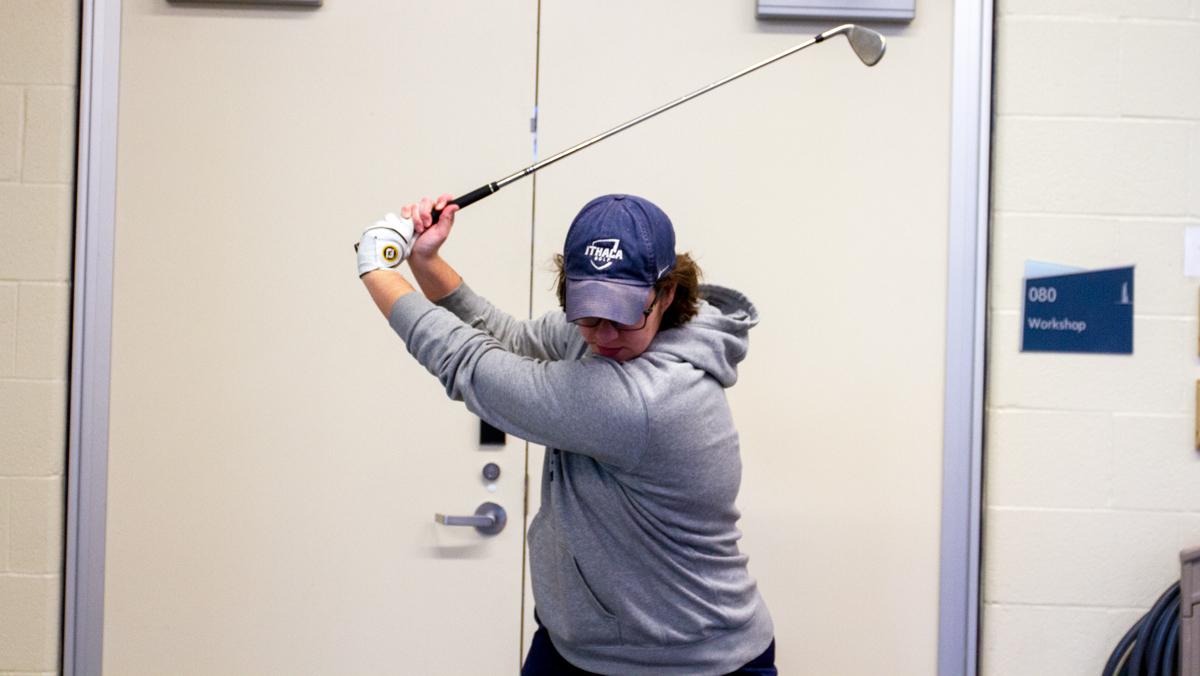 Head coach Keith Batson enjoyed a successful first season at the helm of the Bombers’ golf team in 2018, but losing the majority of his team to graduation has changed the dynamic of this year’s squad.

Despite this, Batson said he is ready to rebuild with a young group of athletes who are ready to take on the challenge of filling the shoes of the Class of 2018. The Bombers finished first in three of their nine invitationals in the 2018 season and achieved a second–place finish in the Liberty League Championship. They were lead by Kyra Denish ‘18, Indiana Jones ‘18 and Lauren Saylor ‘18. However, for the 2019 season, the Bombers have no seniors on the roster and only one junior.

Peyton Greco, the team’s lone junior, has had to adjust to her new position as a leader. During her freshman year, the team was made up mostly of juniors and seniors. While her role is new to her, Greco is attempting to embrace it.

“It’s definitely different being the only upperclassman on the team,” said Greco. “For my entire experience on this team up until this year, I have been the baby of the team. That said, I’m the captain this year. I think I have the ability to really set the tone for the entire team and help everyone improve both individually and collectively as a team.”

Batson also said he sees Greco as a capable leader for the Bombers this season.

“Our junior and captain Peyton Greco struggled her freshman year but saw a 6–shot difference in her stroke average from freshman to sophomore year,” said Coach Batson. “I lean on her a lot to show leadership and guide the underclassmen.”

With so few older athletes, the Blue and Gold will require some leadership from their underclassmen. Sophomore Sophia Israel said she is doing her best to provide a veteran presence in only her second season with the team.

“It certainly was a big adjustment from last year,” said Israel. “I was really excited coming into this year to see all of the new faces and to see what the first-years can do. As one of the older people on the team, it was quite the adjustment for myself to step into that leadership role, but I was very open and excited about that.”

Having a strong core of seniors led to a successful first season at the college for Batson. With so many changes in his second season, he has a different mentality.

“We knew going into this year that we were not going to have the same type of year this year,” said Batson. “Our goal was to improve day by day and week by week. Improvement in golf is so hard to see in the short term, but when you look back after a few months you can see it. I think we did that well last fall, and we are just hoping to continue that into the spring.”

The golf team also competes during the beginning of the fall season. In the fall, it posted top-5 finishes as a team in four of its six invitationals. Batson is optimistic about the future of the program.

“We are hoping to have a solid spring and finish this season on an upward trend and come back next fall a much more experienced team with a few fresh faces,” said Batson.

“Spring break is vital for us as golfers since it’s very rare for us to actually go outside and practice,” said Israel. “We have a great opportunity to go down to Florida to help kickstart our season. I believe this trip will be extremely beneficial for us on an individual and team standpoint.”

According to Israel, the trip to Florida improves the team’s skills on the course while also serving as a great team-building activity.

“Individually, this is the first real test to see if our offseason work pays off,” said Israel. “From that, we can continue to build into the season. Teamwise, trips like these are crucial for team bonding. While we do golf most of the time, it also allows us to connect off the field with our time off.”

The future is bright for the Bombers because their underclassmen majority means this squad will be together for several years. However, success is not only about the current members of the team.

“It’s all about recruiting,” said Batson. “We want to bring in a particular type of student athlete. They have to love golf and have the drive to get better. If I don’t see the passion to get better and to practice, then I am going to move on.”

Golf kicks off spring season with loss to SUNY Cortland