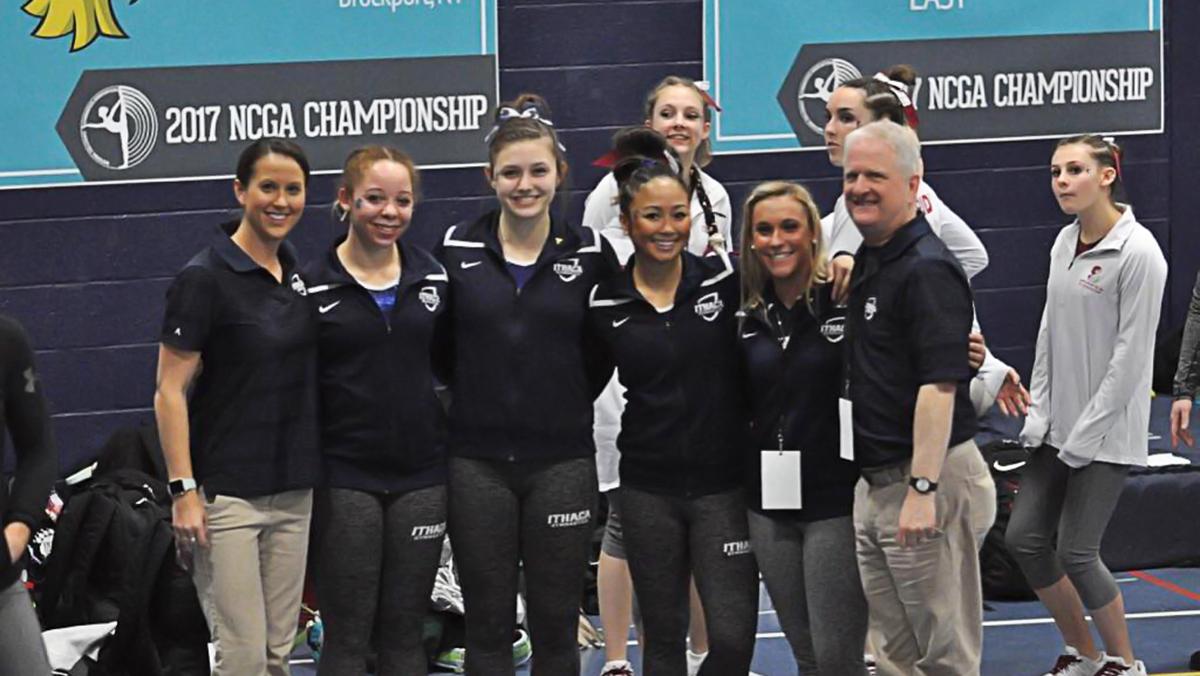 Sophomore Carolyn Nichols took to the floor in Stout, Wisconsin, to compete in the vault event at the National College Gymnastics Association Individual Event Finals. She didn’t know it then, but her vault routine would earn her an All-American title.

Nichols became the 12th NCGA All-American for the vault and finished third in the event with a score of 9.650. This was Ithaca College’s highest finish in the vault since the 2006 NCGA Finals.

Staff Writer Casey Koenig spoke with Nichols about how she felt after the announcement and what the experience was like at nationals.

Casey Koenig: Did you expect to make nationals this season?

Carolyn Nichols: No, but it was definitely a goal of mine. I’m glad that I did.

CK: How did you feel when you did make nationals?

CN: It was really exciting. Because the way that we had to qualify is, I didn’t find out until an hour after the meet because they had to do all the calculations. It was the coaches that told us when we were out to eat after the meet. It was fun.

CK: How did the team react?

CN: They were wicked excited. Everyone did a group huddle, and everyone was cheering in the restaurant, and people were looking around, like, what’s going on? It was wicked cool.

CK: How did you prepare to do your best at nationals?

CN: We had two weeks in between regionals and nationals. Of all the people who made it, all we did was routines, routines, routines and focused on fixing the little stuff that we really hadn’t had time to focus on during the whole season. For me, I worked on really focusing the technique and making the vault as clean as possible. It definitely paid off.

CK: How was the atmosphere at nationals?

CK: What was it like to watch your other teammates?

CN: It was really exciting. Everyone put in a lot of hard work those two weeks, so I kind of expected everyone to hit their routines, and they did, which was fun to watch, and it was also fun to be on the floor with them and give each other little pep talks and be next to each other when they’re getting ready to salute, and being the first person to give them a hug or a high–five when they finished was really fun.

CK: Did you have any extra nervousness at the meet, or did you treat it like any other meet?

CN: I treated it like any other meet. It was kind of like, “OK, you’re at nationals, now treat this like another meet.” So there was definitely some awareness. It was a cool experience. I went into it thinking, “OK, you’ve got nothing to lose, so you might as well just go for it.”

CK: How did you feel when you stuck the landing?

CN: I’ve stuck it before in practices a couple times, and whenever I stick it in practice, I stay there, and I’m like, “Did everyone see it? OK, now I’m going to move.” I stood there for an extra second after I did it before saluting the judges. It was just really, really cool because I didn’t realize I stuck it until after I stuck it. It was crazy. I definitely didn’t try to. I didn’t expect to, but I did.

CK: What was it like to hear the results and find out you were tied for third?

CN: It was exciting. Our coaches were keeping track of the results as we were going through, and I was the second rotation, so there were three more rotations after me, and after I did my vault, I was in third place, and then I obviously kept watching vault, and people would do really good ones and score 9.650s, and I was like, “I got a 9.650.” I think I tied with four other people, five other people, so it was just really cool.

CK: Do you have any goals looking into next season?
CN: I want to go back to nationals for sure. It would be great to go as a team. I really like floor, too — I’d love to go back for floor also, and do vault again and maybe get first. Who knows?