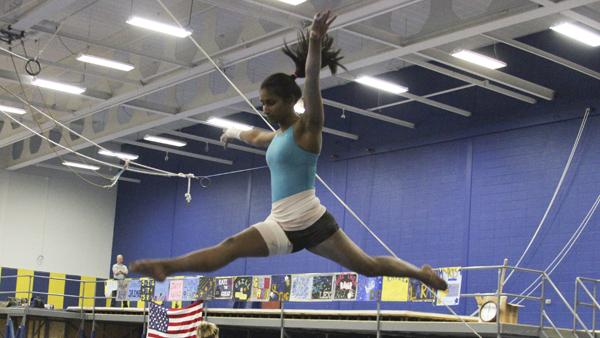 Jennifer Williams/The Ithacan
Senior all-around gymnast Rani Jacobson practices her beam routine during the gymnastic team’s workout Feb. 10 in Ben Light Gymnasium. Jacobson is one of the many gymnasts who is fighting off injuries this season.
By Alexis Forde — Contributing Writer
Published: February 12, 2014

Injuries have hindered the gymnastics team from getting a win this season, as the Bombers are on a seven-meet losing streak. Head coach Rick Suddaby has seen many injuries in his 28 years of coaching, but, said, this season’s injuries have impacted the team more than any other year he has been a coach.

Most of the team’s starting lineup has been out this season with various leg and arm injuries. These injuries include three ACL tears, a torn achilles and a torn labrum in the shoulder. Sophomore Megan Harrington described the injuries of leading gymnasts and what the team does to make sure its members don’t get these types of injuries.

“We make sure we do a good 20-minute stretch to really make sure our muscles are warm and worked in to take extra precautions of not tearing anything,” Harrington said.

The team was disappointed with the number of injuries it was getting in the beginning of the season, but is now dealing with them by focusing on how to keep healthy gymnasts free of injuries, Harrington said.

“As more injuries kept happening, we got more and more disappointed and sad,” she said. “Now that we’ve gotten later into the season, we’re really trying to cope with the injuries, and people are really stepping up, which is really nice.”

Head coach Rick Suddaby said he knows his team has not been performing at its best. Many of the gymnasts competing in meets are athletes who wouldn’t have usually been in the starting lineup because of how new they are to competing at the varsity college level.

“Half of our normal starting lineup is now gone,” he said. “All of the people that are competing were our backups.”

Sophomore Angela Di Francesco said, as a result of all the injuries, Suddaby is changing up the way the team prepares for meets by helping less-experienced gymnasts make up new routines.

“A lot of the [training] for meets this season has consisted of making the most of what you have and putting it all together [skill wise],” Di Francesco said. “So just kind of bringing in every single thing you have and making alterations just so you can put together a routine.”

Suddaby said some of these injuries could be prevented in the future with the new addition of a foam pit, and he has been planning this for a long time. A foam pit is a large pad filled with square foam blocks that allows the gymnasts to complete their dismounts safely. With the money saved up for the foam pit and the wrestling team on the other side of the Hill Center so they no longer have to share the same space, Suddaby said it’s all finally coming together.

“It’s a training system to prevent injury,” he said. “It should be done soon, this week I think. We’re getting close, it’s been a long haul, I’ve been planning this for decades.”

Harrington said the struggle of trying to get comfortable in a competition setting has also been holding the team back.

The team is hopeful about the rest of its season and its plans to focus on how to handle pressure. Di Francesco said the team incorporates pressure situations into practice so the gymnasts are more prepared for them during meets. She said one of these exercises involved a pair of gymnasts. The pair would perform two routines, and if one person falls three times in those two routines, that person’s partner would have to do three routines.

“Instead of just kind of doing your sets on your own, you’ll have everyone watching, or we’ll make a game out of it and put a lot of pressure on it so that when we get to meets and there’s a lot of pressure it’s so much easier,” she said.

Di Francesco said she and her teammates are fond of repetition, doing routines over and over again until they get them right. Though some of the gymnasts like to practice this way, not all of them do. She said every gymnast has her own preferences with routines.

“Personally, I like to do numbers, and numbers makes me feel more comfortable with my skills, but other people prefer to do fewer numbers and do quality over quantity,” Di Francesco said. “Repetition works for a lot of girls, but it really depends on the person.”

Teammates are constantly motivating each other at practice, standing outside of the mats or on the side of the balance beam clapping for one another. Di Francesco said she believes the team works really well together because it spends time together in practice and at meets, as it has been complimented at meets by alumni and coaches from other teams.

“For the amount of time we all spend together, it just makes us stronger,” she said. “The dynamic is so positive all the time; every time you walk into the gym or in a competition, you’re just excited to be there, and it’s never a negative environment.”

Suddaby and his team have a goal of reaching the 180-point range by the time the East Coast Athletic Conference and the National Collegiate Gymnastics Association championships come around in March.

Harrington said being in the 180-point range would indicate the team has clean routines and consistency.

“The more routines we do, the better chance we have of getting that goal,” Harrington said.