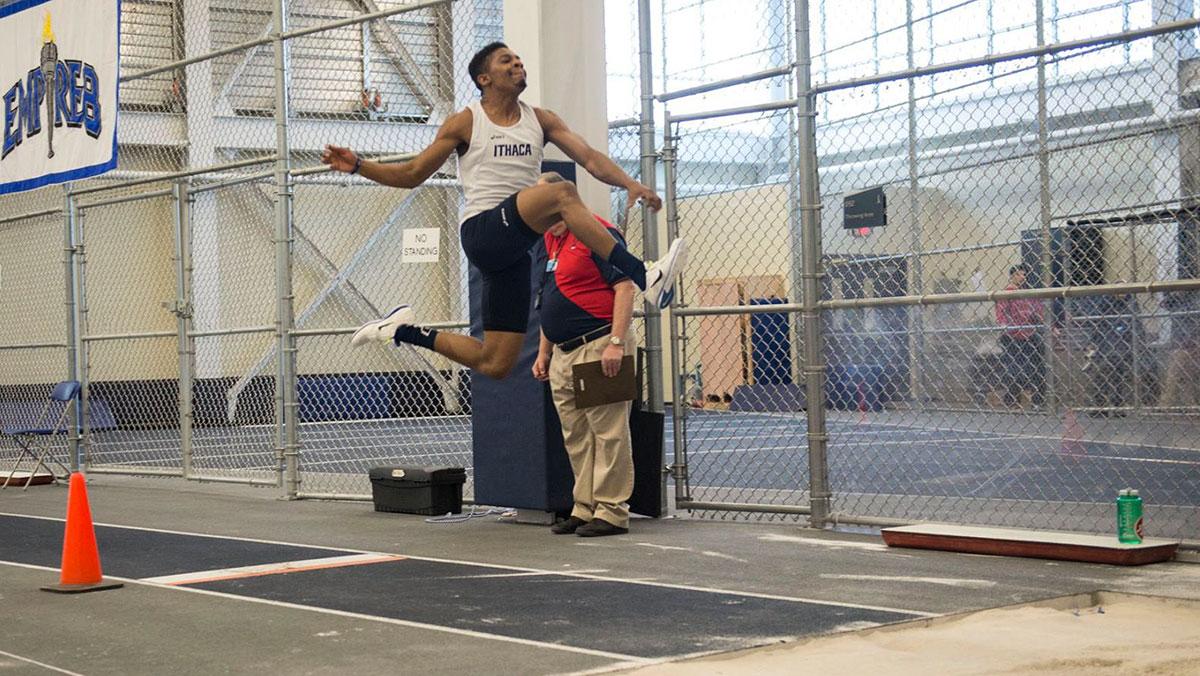 Most athletes cannot fathom the idea of missing a season due to injury. They will rehab tirelessly in order to get back onto the court or field. However, when personal matters come into play, that is a different story.

Senior De’ Marquis Malone made the executive decision to not return for the continuation of the indoor track and field 2014–15 season and also did not participate in the following outdoor season. His uncle and teammate, junior Roosevelt Lee, made the same decision. Malone lost his father in January 2015.

“It was hard to stay focused [on track], and I really tried to be there for my family,” Malone said. “I had to step back and prioritize and figure out what’s the most important in my life right now.”

Even with the unfortunate absence from the team, Malone is currently ranked nationally among all Division III men’s track and field athletes in the triple jump. As of the last official rankings released March 1, Malone stands at 33rd in the nation in the triple jump. He also competes in the long jump for the Bombers.

During Malone’s time off the track and sand pits during the Spring 2015 semester, he started working to bring in money for his family. Malone and Lee graduated from Ithaca High School, so having their immediate family live close to where they attended college was fortunate to continue their educations on course.

Malone said he had a strong semester academically that spring. He also stayed very active for his return to compete in track and field his senior year. Malone played on a couple of basketball teams his father used to play on and coach.

“I knew I wanted to make a big comeback for track,” Malone said. “I came back this fall with my mind focused and ready to do what I needed to do.”

Malone has broken his personal records in both long and triple jump this season. He reached both marks at the Ithaca Quad Meet on Jan. 22, when he hit 6.86 meters in the long jump and 14.00 meters in the triple jump. Both of these marks are what qualified Malone to be nationally ranked.

“It’s really a push for me wanting to be the best,” Malone said, regarding the internal competition on the men’s team and how multiple members are also nationally ranked. Teammate Andrew Brandt is currently 13th in the high jump, with his best height at 2.05 meters.

Malone said it took much mental effort to earn that national ranking.

“My focus was to have a great season, and that distracted from thinking that I would have anything else but a great season,” Malone said. “The only thing that would’ve messed me up was if I slacked on my training or wasn’t being active.”

For Malone to reach new heights, he has spent time working on his landing and on his approach onto the sand this season for both events.

“Coach Mary [Wallenbeck] is definitely responsible for why I am having a great season,” Malone said. “She is able to focus on people’s weaknesses, identifying them and trying to find a solution to them.”

Wallenbeck is an assistant coach for both the men’s and women’s teams, specializing in the jump events.

Regarding Malone’s landing, he has maneuvered his technique where he is able to slide through an additional distance in the sand rather than just planting his feet down stiff once he reaches the ground. Malone described it as “landing on your butt instead of feet.”

Lee, unlike his nephew, is not strictly a jumper. This season, he has competed in multiple short-distance events, mainly running the 200-meter dash, as well as the middistance event, the 800-meter relay. Lee had not participated in the long jump event until this season, and so far, his personal best in the event came Feb. 20, when he jumped 6.12 meters.

Now that the two compete in one of the same events, they work together more during practices.

“It is nice to be able to learn from him,” Lee said. “It’s great to have family on the team, and we’re obviously always supporting each other.”

Head coach Jim Nichols said since Malone’s arrival his freshman year, he has been a valuable long and triple jumper for the Bombers. Since Malone is from Ithaca, Nichols was able to monitor his track and field performance from Ithaca High School closely, and Nichols knew he was about to deal with a talented athlete.

“When he came in as a freshman I knew that he had talent, but talent isn’t the only thing that allows you to be successful,” Nichols said.

Along with talent, Nichols said, success comes at the expense of hard work, dedication, a high work ethic and the desire to achieve. For Malone’s current success and being on the cusp of qualifying for Nationals, Nichols described his absence from the team as an inner fire that pushed Malone like never before.

He acknowledged how student-athletes, like Malone, take a season off for a multitude of reasons. Some, when they return, have a different outlook on the sport, and they realize how limited of time they have left with the opportunity to still compete in the sport they desire.

“A lot of times, there is a different fire and a different desire when they return to try to be the best they can be in the little time they have left to participate,” Nichols said. “It varies from person to person, but I think from De’ Marquis’ situation last year, why he left the program and then now coming back into the program, he has a really strong appreciation for it and really wants to do well.”